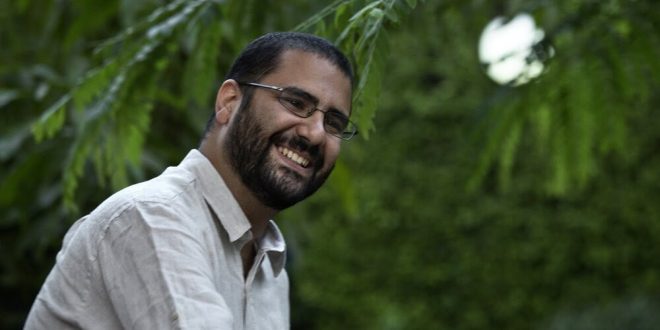 The family of the jailed British-Egyptian activist Alaa Abd el-Fattah has received a handwritten letter from him which they say is proof of him being alive.

Abd el-Fattah’s sister, Sanaa Seif, tweeted that her brother, who had escalated his protest against his detention by ceasing to drink water on 6 November, had started drinking again on 12 November and that the writing on the letter was his.

The family of the activist, who has been on hunger strike for seven months, was told last week that a “medical intervention” had been carried out on him in a Cairo prison.

I’m so relieved. We just got a note from prison to my mother, Alaa is alive, he says he’s drinking water again as of November 12th. He says he’ll say more as soon as he can. It’s definitely his handwriting. Proof of life, at last.
Why did they hold this back from us for 2 days?!
— Sanaa (@sana2) November 14, 2022

During the period of his hunger strike, Abd el-Fattah only consumed 100 calories per day and he stopped drinking water to coincide with the opening of the United Nations Cop27 climate summit in Egypt’s Sharm el-Sheikh.

Khaled Ali, his lawyer, said he had been granted a visitation permit to see Abd el-Fattah in prison, but had twice been denied entry despite holding two permits from the general prosecutor.

Widely considered Egypt’s best-known dissident, Abd el-Fattah has spent the better part of the past decade behind bars.

His plight has hit headlines again against the backdrop of the climate conference, which is taking place in Sharm el-Sheikh from 6-18 November amid tight restrictions on peaceful assembly and free speech.

A number of senior figures, including British Prime Minister Rishi Sunak and French President Emmanuel Macron, have called for his release during the conference.

On the same day, German Chancellor Olaf Scholz also chimed in with calls for the activist’s release.

“There must be a decision – his release must be possible, so that this hunger strike does not end in death,” he said, adding the situation was “very depressing” and “we should be afraid that this could lead to dreadful consequences”.

At least 60,000 political prisoners are estimated to have been jailed since Egyptian President Abdel Fattah el-Sisi overthrew Mohamed Morsi, the country’s first democratically elected president, in 2013.