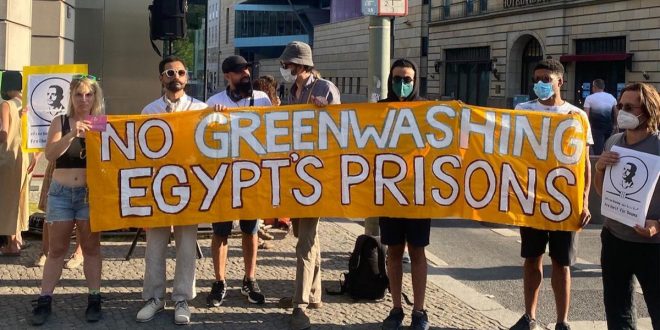 Twelve human rights organisations have signed a petition calling on Egyptian authorities to immediately and unconditionally release detainees held for peacefully exercising their human rights ahead of COP27.

In November, Egypt will host the United Nations climate change summit in the Red Sea resort town of Sharm El-Sheikh, where heads of state, journalists and ministers will gather to tackle issues related to the climate emergency.

Human rights groups are looking to use the spotlight on the summit to force change on human rights in the country, including the detention of 60,000 political prisoners.

The spotlight is on the government’s restrictions on freedom of speech association and freedom of association and assembly, “which risk undermining a successful, inclusive and participatory climate summit,” according to the petition.

In May 2017 the Egyptian government blocked roughly 560 news, political and human rights websites as a way of controlling the narrative and stamping out free speech.

Also on the list of demands is ending the prosecution of civil society activists and organisations and guaranteeing that rights groups can work without fear of reprisal.

Finally, the petition calls on the government to ensure that civil society can meaningfully participate in discussions on climate change without fear of reprisal.

The petition has been supported by 104 organisations and groups and 102 individuals from over 50 countries.

“We voice our support to the call made by the UN Special Rapporteur on the rights to freedom of peaceful assembly and of association: that the work of civil society is recognised, publicly and at the highest levels, as essential to the advancement of climate action and just transition,” the petition states.

“Moreover, we stress the importance of the right to freedom of expression and independent reporting to foster efforts to address the climate crisis.”