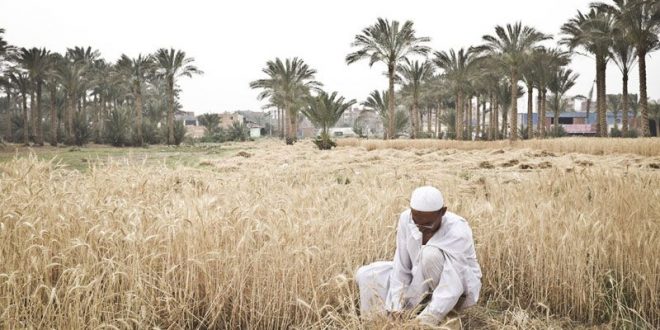 Egypt: How ‘smart crops’ are used to mitigate effects of climate change

The past few years have been especially daunting for Abul Mahasen Mohamed, a farmer from the Nile Delta province of Menoufiya.

High temperatures, water scarcity and rising salinity in the soil deprived him and fellow farmers of sizeable crop yields.

This year, Mohamed is growing a new maize variety that holds out against extreme weather conditions.

This variety needs a fraction of the amount of water needed by traditional crops for irrigation.

He is joining the national march towards climate-smart crops, plants that can offer a defence against the impacts of climatic change.

In doing so, Egypt, one of the countries hardest hit by climate change, is seeking to mitigate the effects from rising temperatures on its food security and agriculture sector, which employs 21 percent of the national work force and contributes around 11.3 percent of the country’s gross domestic product.

Local agricultural research centres have recently unveiled crop varieties that can bear up against high temperatures.

These varieties include a new rice type that can adapt to extreme weather conditions and high salinity in the soil.

The same variety only needs a small amount of water for irrigation, researchers say.

“The development of the new rice variety is part of a larger plan for expanding the cultivation of climate-smart crops and legumes,” Hamdi Muwafi, the head Egypt’s National Project for the Development of Rice, told MEE. “We work hard to change the makeup of the crops so that they can cope with the changes global warming is causing.”

In 2008, the government imposed a ban on rice exports to preserve stocks for the domestic market and save water.

Egypt produced 4.5 million tonnes of rice in 2021/2022, down from 6 million tonnes in 2020/2021, according to the Grains Chamber at the Federation of Industries. In 2022, the cultivation of rice was allowed in nine provinces, five of which are located in the Nile Delta.

Most of the country’s rice farms are located in the Nile Delta, which stands in the epicentre of the impact of climate change.

The global warming-induced rise in the sea level here is expected to inundate large swathes of the delta, increasing salinity in its soil and displacing millions of people.

However, together with other climate-resilient crops, the new rice variety promises to alleviate some of the effects of climate change and provide much needed food for Egypt’s more than 100 million people.

Around 300,000 acres of farmland have already been cultivated with the new variety, which makes up almost 30 percent of the country’s rice-growing farmland, according to Muwafi.

Feeling the heat from climate change

Egypt has been caught off-guard by the sudden effects of climate change, which are manifesting themselves in unprecedented floods and torrential rains, especially in the country’s northern coastal cities and its most southern cities.

These effects explain growing national interest in adaptation policies over the past few years.

Extreme weather conditions are destroying some crops and reducing yields from others.

This year, adaptation policies are saving the mango produce and contributing to abundant yields in the mango cultivation hub of Ismailia and other parts of Egypt.

Nevertheless, Egypt still expects to be on the receiving end of global warming’s painful blows.

“Agriculture, marine life and human health will top the victims of climate change which has become a worrying issue, not only here, but also around the world,” Elham Mahmud, professor of environmental studies at Suez Canal University, told MEE. “This will of course add burdens to the economy.”

The rising sea level threatens to destroy almost 15 percent of the farmland in the northern and eastern parts of the Nile Delta, according to some local studies.

Millions of people are expected to be affected by floods and torrential rains, stoking the problem of displacement, especially in the Nile Delta and the coastal cities.

Rising temperatures will also be a challenge for the nation’s farmers who will have to find crop and legume varieties resilient to global warming.

The loss to Egyptian GDP from climate change is expected to be in the tens of billions of dollars every year.

The development of climate-resilient crops and legumes is part of Egypt’s adaptation measures in and out of the agricultural sector.

The Egyptian government is launching projects to protect the coasts, expand the construction of seawater desalination plants and widen the scope of protected farming to cushion the effects of extreme weather conditions on agricultural produce – and to save water.

Egyptian authorities are also lining tens of thousands of kilometres of irrigation canals to reduce water leakage and ensure that irrigation water reaches the farthest farmland in the Egyptian countryside.

This comes at a time when Egypt is trying to make the utmost use of available water resources, including by treating sewage water and using it in forestation projects that aim at reining in desertification.

“Climate change has become a major issue in our country, with almost everybody feeling the heat from it,” Mohamed al-Gabalawi, a member of the Committee on Energy and the Environment in the Egyptian parliament, told MEE. “Egypt implements a large number of adaptation projects that will play a role in shielding it against the effects of global warming in the future.”

The government wants to seize the opportunity provided by the conference, which will be held in the Red Sea resort of Sharm el-Sheikh, to press for implementing the pledges made by advanced countries in previous COPs, including at COP26 in Glasgow last year.

Environment Minister Yasmeen Fouad said last week the Egyptian presidency of the conference would also stress important issues such as food security and the need for protecting water resources, nature and biodiversity.

Apart from using the conference to showcase some of the measures it has taken in recent years to adapt to climate change and reduce greenhouse gas emissions, Egypt also wants to lobby for the climate finance needs of developing countries, especially in Africa.

A ray of hope for farmers

Meanwhile, the government is coming under fire for harming the environment, including the cutting of trees in some areas and the destruction of some historical parks.

News of an Emirati real estate developer destroying parts of the Egyptian northern coast to construct a marina for one of its tourist-residential projects in the area shocked many Egyptians, with some people calling on the government to prevent investors from increasing the erosion of the coast.

Nonetheless, some of the adaptation efforts are getting results.

He added the same variety saved up to 40 percent of the water needed by traditional rice varieties for irrigation.

Mohamed, the farmer from Menoufiya, has seen a marked increase in greenhouses in his home village of Quwaysna – where his farm is also located.

The farmers, he said, use the greenhouses to provide appropriate weather conditions for the plants and avoid extreme heat.

“Farmers do everything possible to prevent climate change from destroying their livelihoods,” Mohamed said. “Climate-resilient crops offer hope and an opportunity for the farmers to compensate some of the losses they sustained in the past years.”