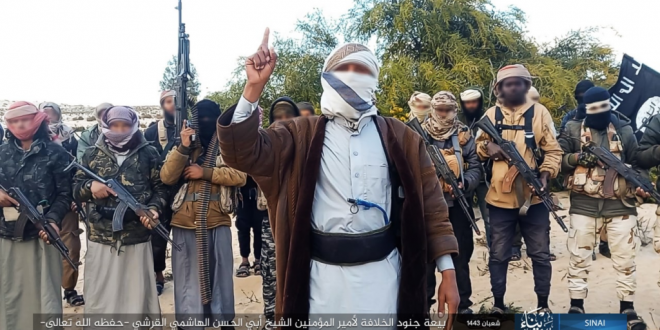 3 civilians killed, 3 kidnapped as residents flee village under assault from Province of Sinai

At least three civilians were killed at a village near the Suez Canal by stray fire from ongoing clashes between the Province of Sinai — the Islamic State affiliate in Egypt — and tribal forces fighting alongside the Egyptian Armed Forces, according to sources from Gelbana village who spoke to Mada Masr on condition of anonymity.

The sources said that another three civilians have been kidnapped since Thursday amid clashes that reached as close as 5 km from the canal. The Armed Forces had not released a statement on the ongoing fighting at the time of publication.

Residents of the agricultural village to the canal’s east were working on the olive and mango harvest, said the sources, when at least 50 Province of Sinai militants occupied roads around the village early on Thursday morning.

Multiple residents of Gelbana, which is geographically located in the north of the Sinai peninsula but falls administratively within Ismailia, said that the militants spread along a 500-meter stretch of the Arish-Qantara International Road, a main artery of North Sinai, and occupied a space between the Gelbana village market and the electricity company in East Qantara. The militants set up temporary roadblocks and conducted searches, shooting at vehicles to force them to stop, abducting at least three civilians and confiscating five vehicles, according to the villagers.

In response, the Armed Forces blocked traffic in both directions of the road on which the armed militants were stationed, a source from the village told Mada Masr. Together with the Union of Sinai Tribes — an armed coalition of tribal groups from across the Sinai Peninsula that has fought alongside security forces in their North Sinai campaigns — the Armed Forces engaged the militants.

Militants retreated into the heart of Gelbana, said the source, planting a web of explosives in their wake across all the roads and bridges leading to the village, including the international road, “in order to prevent the Armed Forces and the tribal union fighters from advancing.” The source described militants spreading out across the village and writing on walls to warn off the Armed Forces and tribal fighters, including, according to a number of residents, messages that read, “all roads are rigged with explosives,” and “remaining and expanding in spite of the cursed army and drunkards.”

The Armed Forces issued verbal orders on Thursday telling residents to leave the village immediately, according to a number of residents who had left the area and who described witnessing as they departed the charred corpses of armed individuals killed in airstrikes. So intense were the clashes between the militants and the tribal fighters and Armed Forces, said the residents, that many abandoned their homes without taking their livestock or belongings with them. The three civilians who were killed were victims of stray bullets, village sources said.

People who settled in Gelbana after they were displaced from their hometowns in Rafah and Sheikh Zuwayed by years of clashes in the eastern part of the peninsula were ordered by the Armed Forces, they said, to go back to their towns of origin and not return to Gelbana again.

With ground access to Gelbana blocked by explosives, the Armed Forces carried out heavy airstrikes, targeting farmland around the village to avoid civilian casualties, according to eyewitnesses, who said Armed Forces tanks fired toward the village in conjunction with the air strikes.

The Armed Forces are currently mobilizing tanks, cannons and military vehicles in the area, according to the village sources, while dozens of four-wheel-drive vehicles belonging to the Sawarka, Tarabin and Roumailat divisions of the Union of Sinai Tribes arrived from the far northeastern regions of Sinai, namely Rafah and Sheikh Zuwayed, to support Sinai tribes forces already stationed around Gelbana, which were mainly composed of fighters from the northwestern Bir al-Abd tribes: Bayadiya, Dawaghra and Akharsa.

The Province of Sinai last targeted an area near to the Suez Canal in May, when it carried out an attack on a water pumping station around 30 km from the Suez Canal, south of the fighting currently underway in Gelbana. The group claimed responsibility for the deaths of 17 soldiers in that attack.

The “large numbers” of Islamic State militants that sources described over the past five days have revived fears of a recurrence of the July 2020 occupation of the northwestern villages of Qatiya, Iqtiya, Ganayen and Merih: a three month siege that forced hundreds of families to flee the area, returning months later to find their homes riddled with mines.