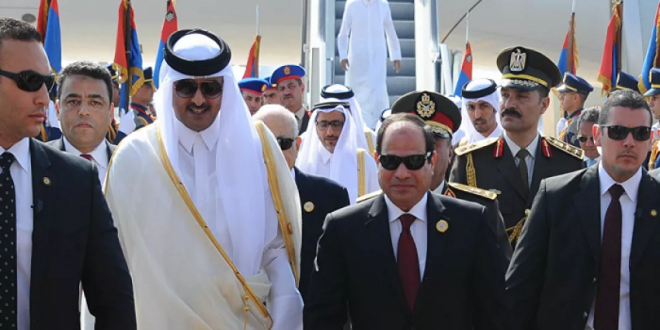 After five years of diplomatic discord, Egypt’s President, Abdel Fattah Al-Sisi, welcomed Tamim Bin Hamad, the Emir of Qatar, to Cairo on 25 June 2022 – for the first time since both countries severed ties.

The embargo, which began in June 2017, involved Egypt, Saudi Arabia, the United Arab Emirates, and Bahrain against Qatar on the grounds of ‘foreign interference’ and alleged funding of Islamist ideological organizations and terrorist groups, such as the Muslim Brotherhood and Hezbollah. Qatar swiftly rejected such claims, leading to diplomatic severance with the demanding countries.

Rapprochement between Egypt and Qatar had already formally resumed a year prior, in 2021, but Bin Hamad’s visit to Cairo symbolically announced the beginning of a new chapter, one that puts past tensions behind – tensions that involved the Muslim Brotherhood, state-owned network Al Jazeera and its affiliates, relations with Turkey, and interference in neighboring countrys’ affairs.

As the bilateral gears gradually begin to turn once more, the question is posed of what the two countries’ thawing relations potentially spell for future cooperation between them.

THE MUSLIM BROTHERHOOD SITUATION IN QATAR

Since the toppling of Muslim Brotherhood-affiliated president Mohamed Morsi on 30 June 2013, and the eventual ascent to the presidency by Abdel Fattah Al-Sisi, Egypt has undergone a crackdown on Brotherhood members. Those arrested were either imprisoned or sentenced to death, while those who managed to escape abroad remain on Egypt’s international arrest list.

An article from Egyptian newspaper Al-Masry Al-Youm in 2012 further indicated that Qatar intended to partner with the Muslim Brotherhood to establish a media organization and further promote its political ideology, with funding reaching EGP 1.87 billion (USD 32 million at the time).

Weeks prior to the political and economic embargo on Qatar, Egypt’s Foreign Minister, Sameh Shoukry, renewed the country’s request to extradite 26 Brotherhood escapees believed to be in Qatar. The extradition request was of great importance to the Al-Sisi administration during that period, a period of heightened political tension, in which it maintained that the Muslim Brotherhood’s existence damaged Egypt.

Shortly after the beginning of Egypt’s diplomatic discord with Qatar, in June 2017, the Gulf state’s foreign minister, Mohammed bin Abdulrahman Al-Thani, asserted Qatar’s belief that the Brotherhood is not a terrorist group.

As one of the two countries’ core causes for their previous friction, it remains to be seen whether Egypt will renew the extradition request, and what Qatar’s response will be, as it continues to stand in the way of complete rapprochement.

However, it seems that this issue has lost the centrality it once had, as the focus of Bin Hamad’s visit was on other pressing matters of more practical benefit to the two countries.

Bin Hamad’s visit to Cairo heralded a new phase in economic relations between Qatar and Egypt.

“The Emir of Qatar underscored his country’s keenness on continuing the reciprocal steps, with the aim of promoting and further strengthening the various bilateral cooperation mechanisms between the two countries in the coming period,” presidential spokesperson, Bassam Rady, reported during Bin Hamad’s visit. “This shall take place by boosting Qatari investments in Egypt and capitalizing on the broad investment opportunities available.”

A cooperative EGP 94.3 billion (USD 5 billion) investment agreement with Qatar, announced by Prime Minister Mostafa Madbouly in March 2022, was a positive indicator of what was to come in terms of future investments.

“Our economic relationship [with Qatar] is growing, and I am very happy that it is growing in the right direction […] since last year there have been regular visits between Doha and Cairo,” explained Egypt’s Finance Minister, Mohamed Maait, during the Qatar Economic Forum on 24 June.

Maait later added that another investment deal of around EGP 56.6 billion (USD 3 billion) is in the works – promising economic benefits to both countries. Potential benefits were made more apparent by Niven Gamea, Egypt’s Trade and Industry Minister, who highlighted the possibility of Egyptian businesses establishing branches in Qatar and vice versa.

Qatar’s Finance Minister, Abdulrahman Al-Thani, echoed Egypt’s sentiments during a press conference on 29 March, expressing eagerness to increase investment opportunities in Egypt “after [overcoming] the previous period, which was marred by some tensions.”

A joint business council between the two states is also in the works, according to Gamea, which will consist of businessmen from several sectors to better strengthen economic relations.

Despite the two country’s rapprochement, the website of the Qatari news network and media giant, Al Jazeera, remains blocked in Egypt – a decision made by Egypt in mid-2017 on the grounds that Al Jazeera supports the Muslim Brotherhood and terrorism in Egypt.

Nevertheless, the possibility of restoring Al Jazeera may find itself on the table once more, following renewed ties between Qatar and Egypt. A billboard campaign by Al Jazeera in Egypt last year further hinted at a potential return for the network’s presence in the country.

American think-tank and research institute, the Washington Institute for Near East Policy (WINEP), reports that Al Jazeera’s commentary on Al-Sisi’s government has lightened over the past months.

“It also removed a number of videos that were critical of the Egyptian government from its websites,” WINEP adds.

REVIVING TRADE BETWEEN THE TWO COUNTRIES

Prior to Egypt’s economic embargo on Qatar, trade between the two states was a significant aspect of their relationship.

In 2016, a year prior to the embargo, Qatar exported EGP 22 billion (USD 1.17 billion) worth of goods to Egypt. On the other hand, Egypt exported goods worth up to EGP 6.8 billion (USD 363 million) to Qatar in 2016 – mostly wires, cables, and other electric conductors.

Around 93 percent of Qatar’s exports were petroleum gasses, according to the Observatory of Economic Complexity, a renowned data visualization platform for international trade statistics.

“There was an agreement to develop cooperation between the two countries in various fields, especially in energy, agriculture, investment and trade, particularly enhancing the flow of all Qatari investment to Egypt, which serves the common interests of the two brotherly countries,” Rady detailed in the presidential press release.

“During the meeting, [Al-Thani] highlighted the successful economic policies Qatar has put in place to support the private sector and pointed out the incentives, legislations, and promising opportunities aimed at encouraging [Egypt’s] investors, businessmen, and business owners to invest in Qatar,” the Ministry’s press release said.

Maait and Ali Al-Kuwari, Qatar’s Finance Minister, signed a memorandum of understanding on 24 June 2022 to facilitate trade and financial cooperation between the two states.

Despite reviving relations between the two countries, there is no denying that Qatar and Egypt experienced a tense period during the previous years – a fact both countries openly acknowledge. Yet the potential for enhanced economic opportunities, through trades and investments, as well as the chance for diplomatic rapprochement, indicates both states are looking to put the past behind them.