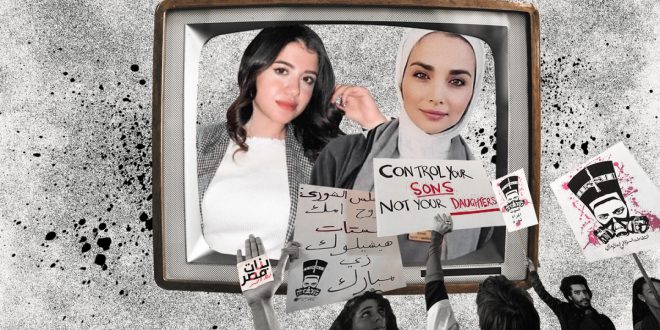 This article is part of The New Arab’s States of Journalism series, a sustained exploration of freedom, repression, and accountability in MENA and global media landscapes. Read more of the series’ articles here.

Recent gender-based violent crimes in the Middle East and North Africa region have provoked mass fury in Arab societies and via social media.

But the brutal murders last month of Naira Ashraf, from Egypt, and Iman Rasheed from Jordan have also brought attention to sensationalist Arabic media coverage of violence against women.

While Women make up 49.7% of MENA’s 345.5 million population, they still struggle to gain equal representation and be heard on all fronts.

From sensationalism to victim blaming, Arab media outlets and media personalities often opt to cover gender-based violence (GBV) in a manner that is disrespectful to victims and their families, and one that defies global journalistic ethical standards.

The media often perpetuate victim blaming in various ways. This can be carried out in subtle and indirect forms, by highlighting specific details while reporting on GBV or focusing on the victim’s attire, for example, her head covering, or her type of clothing.

Other details might include references to the victim’s ‘way of life’, or ‘manners’. When referring to Naira Ashraf, for example, one reporter is heard asking a neighbour, “we heard she was as innocent as a little blind kitten.” The reporter here compares the victim, a fully grown 21-year-old woman, to a voiceless, baby animal.

Sensationalist headlines and personal images of victims, most likely pulled from their personal social media accounts without permission, are other infractions that some Arabic media commit.

Insinuating that victims were in relationships with their perpetrators or that the way they acted or dressed is to blame for their fate is something that often also creeps into news stories.

In such coverage, the focus is on the victim’s appearance, looks, and manners, which should not have anything to do with the crime that was committed and the fate of the victim.

Another ethical violation often committed by media outlets is the posting of brutal video clips. In the recent murder cases of Naira Ashraf and Iman Rasheed, media outlets posted videos of the murders as they unfolded, ignoring how this violates journalistic ethical standards and the impact these violent clips have on victims’ families and loved ones.

Justifying a perpetrator’s crime is another clear infringement that is often noticeable in Arab media coverage of gender-based violence. Stories on spousal murders or spousal abuse will often start with a headline that justifies the ‘why’ of the murder or the attack.

He killed her because he suspected she was cheating on him, or he was a jealous husband who was afraid she was going to leave him.

Glorifying or romanticising the murderer is also a common theme, which is especially manifest in media reports on honour crimes.

Although there have been efforts by MENA governments to end honour killings, which are crimes committed against a family member who is suspected of acting in a way that has brought shame onto the family’s honour, the practice is still fairly common.

According to Statista, as of 2019, 27% of Algerians, 25% of Moroccans, and 21% of Jordanians believed the practice was acceptable. The region’s media often confirm this view in how they cover honour killings.

Headlines that justify the killings or explain the killer’s reasoning are extremely common. When the term ‘honour killing’ is used in a headline, this confirms that the practice is accepted.

These examples demonstrate the bleak reality that MENA women face when dealing with media coverage, especially on issues of GBV. What exacerbates the issue is the lack of equal representation of female reporters in newsrooms across MENA.

In the Gulf region, for example, even though men and women study and graduate from the same media universities, social norms impose glass ceilings that prevent female reporters from acquiring journalism jobs or advancing their media careers.

These same social norms prevent female reporters in the region from covering a variety of media topics, compared to their male counterparts.

Yet, with the high number of gender-based violence recorded in the region more female reporters are sorely needed. The MENA region ranks the second highest in the world in terms of GBV, where at least 35 percent of women and girls have experienced violence in some form by an intimate partner.

According to Amnesty International, “despite some limited reforms, [MENA] women continue to face entrenched discrimination and daily violence amid the abject failure of governments to stamp out arbitrary arrests, abductions, assassinations, so-called ‘honour’ killings and other forms of gender-based violence”.

Hence, in a region where GBV is so common, it is imperative that media outlets and prominent media personalities exercise more sensitivity when covering such crimes.

The media’s role is to inform audiences and correct dominant stereotypes about GBV while protecting victims and their families and not displaying their personal lives in public.

Yet often such coverage, if not sensationalist, is lacking and offers no information, statistics or quotes from advocates or experts on GBV. In other examples, especially if the victim leads a life that does not fit the conservative traditions of the region, coverage often points to the victim as the guilty party, instead of blaming the perpetrator who took her life.

These harmful discourses are problematic for many reasons, as accurate reporting is crucial in enabling women and girls to have any chance at receiving justice.

According to Equality Now, stereotypical reporting by media outlets on “violence against women has both an immediate and a cumulative effect. It says to individual perpetrators that there is some justification for assaults on women”.

This inaccurate coverage also impacts society, as it affects how communities perceive certain gender-based violent crimes and whether or not they believe justice can be attained.

In other words, the media can either offer fair and balanced reporting that educates the public and raises awareness of gender-based violence, or they can continue to spread sensationalist and stereotypical coverage of women that does more harm than good.

Current media coverage in the Middle East seems to exacerbate the gender-based violence and oppression that women experience daily, rather than contributing to understanding and ending it.

Gender and SecurityICT and Media Governance
All
2022-07-29
asaeid
Previous Mideast nations wake up to damage from climate change
Next Less Muslim Brotherhood, More Cooperation: The Future of Egypt-Qatar Relations