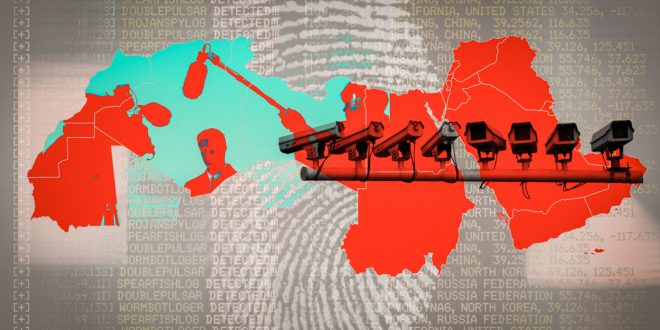 The surveillance threat to MENA’s journalists

President Biden has just wrapped up his first visit to Israel since taking office, and while he has followed in the footsteps of previous US leaders by refusing to hold Israel accountable for human rights abuses, one thing that he should be commended for recently is applying the necessary pressure to end talks by a US defence firm to purchase Israeli spyware company NSO.

As Biden works to uphold his ambitious effort to curb the trade of spyware globally, another issue that human rights organisations and activists were hoping he would add to his agenda on his Middle East tour was the lack of protections for journalists against surveillance in an increasingly hostile press environment across the region.

In addition to admitting the threats that are posed to US national counterintelligence operations by these spywares, there are also global implications for press freedoms that the targeting and surveillance of journalists pose.

Exactly one year ago, the Pegasus Project investigation revealed that NSO Group’s Pegasus software has already been detected in at least 45 countries, targeting at least 180 journalists worldwide, posing an existential threat to the privacy that’s necessary for press freedom to flourish.

Just a week before president Biden’s trip to the Middle East, the Israeli Minister of Defence announced a $3 billion arms sale. It is still unclear how much of this will include military-grade surveillance technologies that will be used to silence journalists and dissidents inside and outside the region.

Questions over what the Biden administration is prepared to do to ensure journalists are protected from state surveillance and abuse, even as it extends its support to this new defence pact in the region, still remain unanswered.

In his op-ed laying out his reasons to go to the region, and his public statements during the trip, president Biden fell short on specifics and vision when it came to press freedoms, despite activists calling on him to put pressure on Saudi Arabia and Israel for the killings of Jamal Khashoggi and Shireen Abu Akleh respectively.

In November, the Biden administration’s move to blacklist the Israeli spyware company NSO Group for developing and supplying spyware known as Pegasus, which foreign governments used to target journalists, was welcomed by organisations working for press freedoms and the protection of journalists. The administration also announced that it would lead a global coalition to address the proliferation of spyware.

However, less than one year later it seems that the priorities for the US administration have shifted away from press freedoms, digital authoritarianism, and wider human rights abuses in the region to focus on security and energy. One look at the leaders Biden met with during his Middle East trip confirms that these meetings brought together some of the most severe abusers of surveillance technologies in the region.

Saudi Arabia, United Arab Emirates, and Egypt, three of Biden’s closest regional allies, worked collectively — using NSO’s Pegasus software — to surveil and silence Saudi journalist Jamal Khashoggi, along with 10 of his associates and family members inside and outside the region, both before and after he was brutally murdered by the Saudi regime.

The use of surveillance technologies has expanded across the world and has been well documented in the region for decades. More than ten years ago, the Egyptian government hacked into journalists’ personal and professional communications, including those of this author, using software from the London-based company called Gamma Group.

With tens of journalists behind bars, today Egypt is considered the world’s third worst jailer of media workers, and surveillance technology enables this.

What started as a desperate response from Middle East dictators to the Arab Spring uprising has become a worldwide threat to journalists, dissidents, and even policymakers. Recent research from the Committee to Protect Journalists and investigations by Citizen Lab, Amnesty International, and the Pegasus project show how the Middle East has become the world’s epicentre for spyware trade and digital authoritarianism.

Recent research from Freedom House also found that at least 17 countries engaged in physical, transnational repression using spyware. For example, former Wall Street Journal reporter Bradley Hope was based in London and reporting on Saudi Arabia and UAE when was potentially selected for surveillance by these Gulf states.

Reports also show how NSO played a key role in Israel’s Gulf diplomacy strategy. CPJ’s research shows that authorities in the region have redoubled their efforts to monitor the activities of journalists and others who criticised their policies.

Governments imported surveillance experts from the US and other allies to develop their own monitoring infrastructures, and collaborated with allies to buy and sell surveillance technologies.

In addition to buying surveillance software, authoritarian regimes across the region also invest significantly in these technologies. The UAE has become a regional leader in surveillance and digital authoritarianism.

Abu Dhabi hired former US government staff members, as CPJ documented in December 2020 and January 2019 respectively, to help develop a new surveillance tool called Karma, which was then used to hack into the phones of activists, political leaders, and dissidents. Like Pegasus, Karma is a zero-click malware, meaning that it does not require targets to click on a link in order to infiltrate their device.

The trend also extends to other US allies in the region like Jordan and Bahrain, who have used spyware to target journalists and dissidents. Morocco is one of the region’s worst offenders. Le Desk reporter Omar Radi was targeted with Israeli technology to hack his phone in the year prior to his arrest in 2020, Amnesty International reported.

Press freedom advocate and journalist Maati Monjib was arrested several times and continues to face legal threats, and the Moroccan government tried to install spyware on his phone, he told CPJ in an interview.

As the cyber security race continues between regional powers, research and advocacy by human rights groups and activists to influence policymakers and promote digital safety for journalists, and legal challenges against spyware use, have managed to gain traction.

In addition to Biden’s decision to blacklist NSO last year, the United Nations called for a moratorium on the sale of surveillance software like Pegasus. The European Union also has separately agreed on export control regulations for surveillance technology which, once enacted, will promote transparency.

Activists in the region, therefore, hope that president Biden will join this global momentum and clearly assert what, if any, real actions his administration will take against governments that abuse surveillance technologies, instead of acquiescing on this important issue for the veneer of diplomacy.

Among the actions they wish to see are actively calling out the region’s and the world’s worst abusers of spyware; sanctioning both state and private actors who have spied or facilitated spying on journalists through the sale or use of spyware; reporting on the use of spyware against journalists and news organisations in its annual human rights reports, and creating an annual list of companies to sanction and blacklist, like NSO.

President Biden had an opportunity during his Middle East trip to reclaim the mantle of champion for press freedom around the globe. Instead, it seems he has backtracked on one of the core tenets of his foreign policy agenda.

The repercussions of this unchecked proliferation of surveillance and spyware in the region will reverberate well into the future.

ICT and Media Governance
All
2022-07-22
asaeid
Previous Sisi’s Military Incursion: A general has been placed in Egypt’s Supreme Constitutional Court, perhaps subjugating the institution.
Next Family of French citizen missing in Egypt after meeting a police officer demand answers