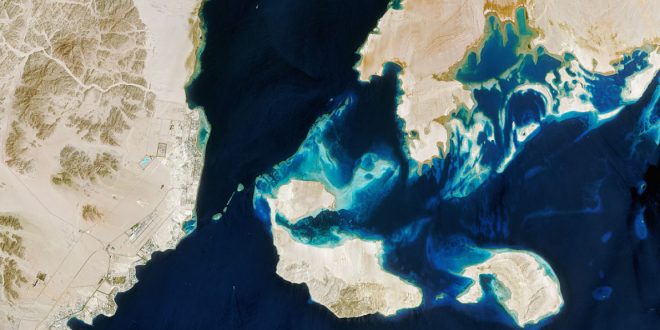 Remote-controlled cameras will take over responsibility from US-led peacekeepers for ensuring international shipping retains freedom of access to the Gulf of Aqaba, whose coastline is shared by Israel and three Arab nations, officials said on Thursday.

The uninhabited Tiran and Sanafir islands lie between Egypt and Saudi Arabia. The islands were ceded to Saudi Arabia from Egypt in 2016.

The Gulf of Aqaba is Israel’s only sea route to its southern port of Eilat and is vital to its trade connections to Southeast Asia.

During a visit to Israel and Saudi Arabia last week, United States President Joe Biden announced that the tiny Multinational Force and Observers (MFO) contingent on Tiran would depart.

The MFO monitors a 1979 US-brokered peace accord between Egypt and Israel, which deployed peacekeepers across the demilitarised Sinai and – to ensure free movement in and out of the Gulf of Aqaba – atop Tiran.

Any MFO redeployment from the island requires Egyptian, US and Israeli agreement. None of those countries, nor the MFO, has publicly discussed when the contingent will leave nor what might follow.

But an official from one of the countries told Reuters news agency: “The peacekeepers will be replaced by a camera-based system.”

Two officials from another of the countries said cameras already in place at an MFO base in the Egyptian resort of Sharm el-Sheikh, 4km (2.5 miles) across the Straits of Tiran from the now Saudi-held islands, would be upgraded for the task.

A diplomatic source who has visited Tiran said the MFO had cameras there as well. Should such cameras be kept and operated, it could entail security coordination between Israel and Saudi Arabia, which have no formal ties.

A person in Washington familiar with the matter said the agreement called for cameras to be placed at the contingent’s existing facilities, leaving open the possibility of both Sharm el-Sheikh and Tiran as placement sites.

“It was important to Israel that as part of this process there be no compromising the commitment Israel got from Egypt, back with the peace deal, most importantly regarding freedom of shipping,” said Michael Herzog, Israeli ambassador to the US.

“This matter has been addressed,” he told Tel Aviv radio station 102 FM.

International Relations and Cooperation
All
2022-07-21
asaeid
Previous Serbia, Egypt agree to boost cooperation amid war in Ukraine
Next When Biden met Sisi: The US soft spot for Egypt’s dictator