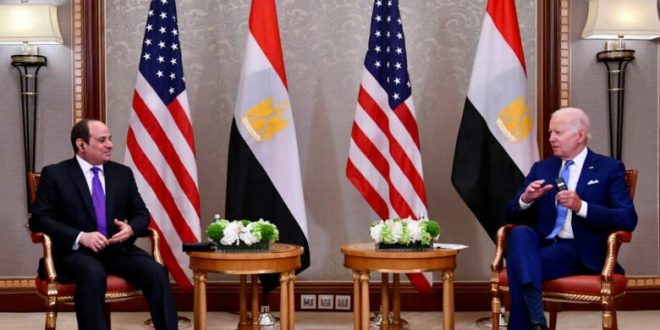 Egypt has reportedly released an unspecified number of detained dissident politicians and journalists in the wake of President Abdel Fatah al-Sisi’s meeting with US President Joe Biden during the Jeddah Security and Development Summit on Saturday.

President Biden is believed to have raised the issue of human rights with Sisi, as well as other Arab leaders during his first Middle East trip, which concluded on Saturday.

Lawyer and House of Representatives member, Tariq el-Khouly, stated that “a group of detainees are being released from custody, as well as many more soon,” on his Facebook page.
Tarek el-Khouly announcing the release of dissidents following Sisi and Biden’s meeting in Jeddah.

Earlier this year, the Biden administration withheld $130 million in of military aid to Egypt over its human rights records, with the State Department saying that the country had not met the conditions to receive the millions of dollars worth of military financing that had been on hold since September 2021.

Rights groups, such as Amnesty International, have repeatedly criticised Cairo’s record on human rights under Sisi’s governance, with calls for investigations into the country’s arbitrary detention of thousands of political prisoners.

In recent years, there have been numerous high profile cases of imprisoned dissidents in Egypt, such as that of Alaa Abdel-Fattah, with protesters and rights groups rallying for their release and pressing the international community to take more action.

Dozens of British and US lawmakers urged him to discuss Egypt’s “extensive architecture of repression” in talks with his Egyptian counterpart, reported AFP.

Rights groups estimate that there are 60,000 imprisoned activists in Egypt, many of whom are faced with overcrowded cells and harsh conditions, as well as being held without trial.

Biden is also said to have confronted Crown Prince Mohammed bin Salman over Saudi Arabia’s crackdown on dissidents, particularly the murder of critic and Washington Post columnist Jamal Khashoggi in 2018.

US Intelligence services concluded that the de facto Saudi leader directly approved of Khashoggi’s murder, however, bin Salman has denied having any role in the incident.