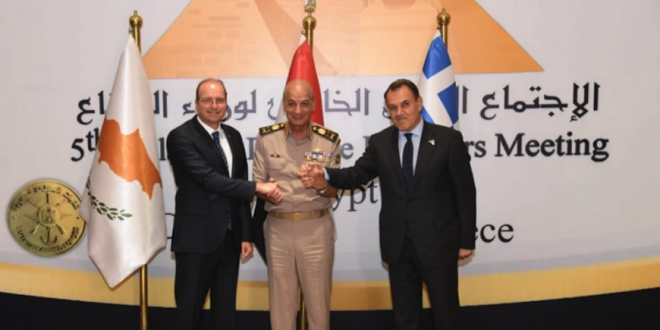 The defense ministers of Egypt, Cyprus and Greece held a meeting in Cairo on June 20 during which they discussed military cooperation to overcome joint security challenges and threats, especially those related to their interests in the Eastern Mediterranean, which is rich in oil and gas resources.

Egyptian Minister of Defense Mohamed Zaki stressed during the meeting the importance of supporting means of cooperation and partnership with Cyprus and Greece, which he said would help bring about security and stability in the Middle East and Eastern Mediterranean.

Zaki also praised the fruitful cooperation between Egypt, Cyprus and Greece over the past years and the joint coordination on all issues affecting the three countries’ interests.

On the sidelines of the tripartite meeting, Zaki discussed with Greek Defense Minister Nikolaos Panagiotopoulos the latest developments on the regional and international scenes and their repercussions on security and stability in the Middle East and Eastern Mediterranean and ways to enhance cooperation and relations between the two countries’ armed forces.

During their separate meetings with Zaki, Panagiotopoulos and Petrides expressed appreciation for Egypt’s role in bringing about security and stability in the Middle East and Eastern Mediterranean.

In this context, Hussein Haridi, a former Egyptian assistant foreign minister, told Al-Monitor that military coordination between Egypt, Cyprus, and Greece underscores the strength of their relations and their interests in the Eastern Mediterranean.

Haridi added that the recent defense ministers’ meeting “carries a message to deter any threat to the three countries’ interests in the Eastern Mediterranean.”

Egypt’s relations with Cyprus and Greece have developed in recent years since Egyptian President Abdel Fattah al-Sisi took office in 2014. During this period, the three countries have held several tripartite summits on energy, gas exploration, counterterrorism and border demarcation, and the three have repeatedly criticized Turkey’s policies in the Eastern Mediterranean.

Egypt, whose rivalry with Turkey turned into a wider regional struggle over Islamism, has shown support to Cyprus and Greece in their long disputes with Ankara.

Turkey is the only country that recognizes the northern part of Cyprus as a sovereign country and has no diplomatic relations with the internationally recognized government of Cyprus in Nicosia, which joined the European Union (EU) in 2004. All UN-backed efforts to reunify the island have failed.

Meanwhile, relations between Turkey and Greece, both longtime NATO members, are strained over several issues, including maritime border, their continental shelf, airspace, migrant issues and the ethnically divided island of Cyprus.

The Turkish-Greek talks to peacefully resolve their disputes resumed last year after a five-year hiatus, but no progress has been made.

In August 2020, Egypt and Greece signed an agreement to demarcate their maritime borders that effectively nullified an agreement that Turkey had signed with the Libyan Government of National Accord in Tripoli in November 2019. Back then, Egypt, Cyprus and Greece decried the Turkish-Libyan deal as illegal, considering it a violation of international law. Greece, for its part, described the deal as an infringement on its continental shelf.

Egypt, Cyprus and Greece, in addition to Israel, Italy, Jordan and the Palestinian Authority, formed the Cairo-based Eastern Mediterranean Gas Forum (EMGF) in January 2019 as a governmental organization with commercial and political goals against Turkey as well. This step has increased the Turkish feeling of isolation in the Eastern Mediterranean.

The forum was established in response to Turkey claiming rights to Cyprus’ exclusive economic zone (EEZ), followed by Turkish onshore drilling operations for oil and gas in internationally recognized Cypriot waters. Ankara claims that its drilling activities are taking place within its continental shelf and it does not violate international law.

Erol Kaymak, a professor of political science and international relations at the Eastern Mediterranean University in Northern Cyprus, told Al-Monitor that he is not sure this military cooperation between the three countries (Egypt, Greece and Cyprus) will effectively deter Turkey. “Ankara will continue to pursue its interests. This means that the Cypriot EEZ will be contested. And there is now a crisis in the Aegean. Egypt is not going to provide deterrence per se,” he added.

Kaymak noted that military cooperation between the three countries reflects common concerns regarding hydrocarbons in the Eastern Mediterranean.

Kaymak added, “Given that hydrocarbon resources exploitation is now not likely to entail pipelines but rather liquefied natural gas (LNG) with an Egyptian hub, Turkey is left on the outside. The Ukrainian crisis makes this more urgent and expedites the process,” he pointed out.

In mid-June, Egypt, Israel and the EU signed a gas export deal under the umbrella of the EMGF. The move came amid EU efforts to phase out Europe’s dependence on Russian fossil fuels as the Russia-Ukraine war continues.

Egypt aspires to increase its exports to Europe through the two natural gas liquefaction stations in Idku and Damietta on its northern coast, with an export production capacity of 1.6 billion cubic feet per day.

The function of the two stations is to convert natural gas from its gaseous state to a liquid so that it can be loaded onto ships and exported rather than pumping it into pipelines.

Since 2021, Turkey has sought to adopt a more flexible approach in its regional alliances by seeking to mend ties with Egypt, Saudi Arabia, the UAE and Israel, as part of its efforts to build cooperation bridges with the US allies in the region. These efforts came after years of political competition and military interference, which helped Turkey boost its influence in the region at the expense of its relations with Arab countries.

Ankara has succeeded in restoring relations with Riyadh, Abu Dhabi and Tel Aviv. But it is still working to normalize relations with Cairo. Achieving this would be an important geopolitical achievement for Ankara that would boost its interests in the Eastern Mediterranean.

Kaymak said, “Since Turkey has been trying to make amends with various regional actors, including Israel, Egypt has been holding out. Presumably, the LNG approach means that Egypt has less incentive than it might otherwise to pursue normalization,” he noted.

Ankara has sought to move forward toward normalizing relations with Cairo. The two countries held several exploratory diplomatic meetings in 2021 aimed at settling their differences. Yet these talks have stopped and the monthslong diplomatic moves did not end the strained relations between the two competing powers in the region.

Ankara was for years seen as the regional hub for the Muslim Brotherhood.

Since then, Cairo and Ankara have engaged in a protracted conflict. Cairo, meanwhile, believes Ankara is not yet serious about mending ties.

Haridi said that talks between the two countries did not lead to a normalization of relations because some differences have not been resolved, in addition to the fact that Turkey has not changed its approach in some Arab countries, including in Libya and Syria.

Cairo has been demanding the withdrawal of hundreds of Turkish forces from Libya, in addition to the thousands of Syrian mercenaries that Turkey has brought to the North African country. Egypt also called on Turkey to hand over Islamists wanted on terrorism charges that are residing in its territories. These two files have not yet been resolved.

Turkey made efforts to secure a maritime border demarcation agreement with Egypt in the Eastern Mediterranean, but Cairo believes that any potential deal must involve Cyprus and Greece and must not violate their continental shelf.

However, Kaymak said, “Should normalization occur, Greece and the Greek Cypriots would be more exposed in the Eastern Mediterranean.”