Home / Normal / After the coup: Egypt’s media landscape in crisis 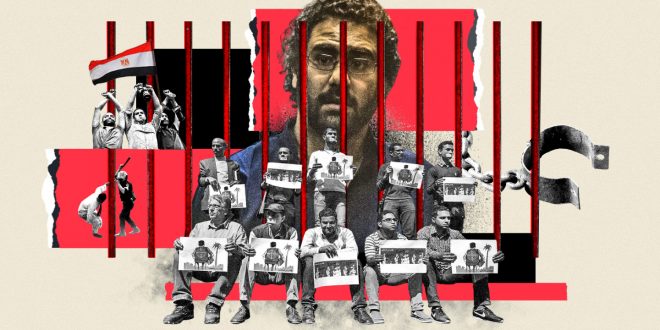 After the coup: Egypt’s media landscape in crisis

This article is part of The New Arab’s States of Journalism series, a sustained exploration of freedom, repression, and accountability in MENA and global media landscapes. Read more of the series’ articles here.

In the not-so-distant past, there existed media outlets in Egypt that paved the way towards seizing at least a margin of freedom in a country run for almost seven decades by successive military regimes.

Several privately-owned, independent, or partisan online newspapers and magazines, together with privately-owned TV channels, operated during the last decade of long-time dictator Hosni Mubarak’s rule that for the first time criticised the government.

Yet little did Egyptians know at the time that what seemed like a promising phase would soon come to an abrupt end, specifically after the military coup in 2013.

One year later, after Sisi was officially elected president, there was an unprecedented crackdown on freedom of expression as he governed the country with an iron fist.

Following the events leading to the protests against Morsi’s rule on 30 June and his ouster on 3 July, Egyptian media narratives, even of independent and privately-owned outlets, aligned behind the state, becoming mouthpieces of the government.

This often involved direct state censorship and control over what journalists and editors could say, whether they agreed or not.

“The narratives of every outlet and TV station in the country are first approved by a state security officer assigned to the place before being released to the public,” a senior journalist, who works for both a state-run magazine and a private TV channel, told The New Arab, on condition of anonymity.

“This has become the reality of Egyptian media, only God knows when or how it can change,” he said despondently.

Before 30 June, some outlets would freely criticise both the Supreme Council of the Armed Forces (SCAF), that took over the country after the downfall of long-time dictator Hosni Mubarak in 2011, and the Muslim Brotherhood group to which Morsi belonged.

“What we have been seeing since 2013 is closing up much of the relatively-free media that evolved before and during the 25 January revolution, either because of direct government control or indirect control through censorship. This has led to fewer media freedoms than the past nine years,” award-winning journalist Lina Attalah told The New Arab.

“During the Mubarak era, there was an economic liberalisation that came with a free media margin,” Attalah, also the editor-in-chief of the independent Mada Masr online newspaper, said.

“The vision of the [current regime] doesn’t seem to realise why there should be independent voices, opposition [forces] or political players. The regime seems to see the media as a tool to serve its interests. It’s a question of vision,” she added.

Described by the Committee to Protect Journalists (CPJ) in 2021 as the “world’s third-worst jailer of journalists,” Egypt has in recent years witnessed some of the most severe global restrictions on the media.

Around 60 journalists are currently behind bars and over 600 websites of both international organisations and media outlets are blocked, including that of The New Arab.

Journalists who violate the unannounced manifesto imposed by the security apparatus usually face terrorism-related charges, sometimes even for just expressing their opinion on social media.

Recently several journalists, including Safaa Al-Korbigi, appeared before the courts days after being subjected to enforced disappearances or terrorised by state security police.

Not only that, journalists have also been explicitly banned from discussing multiple topics.

In 2020, the Supreme Council for Media Regulation (SCMR), loyal to the regime, banned journalists and social media users from reporting on sensitive political and economic issues. Other restrictions were imposed over the following years on reporting about subjects such as army data or religion.

“Eventually, journalists found themselves in a position where they just copy or present to the public the government’s statements or social media posts,” the unnamed senior journalist told TNA.

Nevertheless, there is still a dim light at the end of the tunnel, with some voices fighting to be heard. Attalah is among the few remaining journalists who have been attempting to swim against the authoritarian current.

In 2020, Attalah was named by the US-based Time magazine as among the most 100 influential people in the world.

In the same year, she also received the ICFJ Knight International Journalism Award. Blocked in Egypt since 2017, Attalah’s Mada Masr online news outlet has been offering its readers quality journalism including news, analysis, features, and investigative reports in both Arabic and English, among them an article about Sisi’s son, senior intelligence agency officer Mahmoud El-Sisi.

Since then, the feud between the authorities and Mada Masr has escalated. In the same month the report was published, plain-clothed security forces raided the Mada Masr office and held three senior journalists inside the premises, including Attalah, after confiscating their laptops and mobile phones, for several hours.

Almost one year later, Attalah was subjected to an act of intimidation when she was detained while interviewing mathematics professor Laila Soueif, the mother of jailed prominent activist Alaa Abdel-Fattah, outside Tora maximum-security prison in Cairo.

After being held in custody for about 24 hours, during which local and international rights groups strongly denounced her detention, Attalah was released and the case against her was withheld.

“I can’t deny that sometimes I feel afraid,” Attalah says.