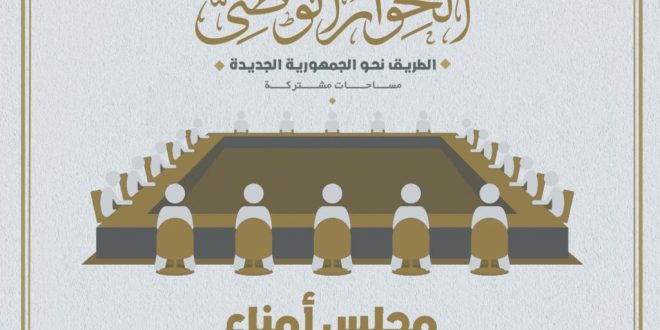 National dialogue gains definition with announcement of board to determine agenda, attendees, but crucial leading role still matter of debate

The formation of a 19-member board of trustees that will determine the shape of the upcoming national dialogue was announced on Sunday in a statement by the sessions’ managing body.

The 19 trustees were chosen after the dialogue’s general coordinator Diaa Rashwan, who also heads the State Information Services and Journalists Syndicate, consulted over the past 20 days with political forces, trade unions and other prospective participants, according to the announcement.

The board is scheduled to hold its first session in the first week of July, before the Eid al-Adha holiday, in order to determine the invitees to the dialogue, its agenda, duration and priorities, according to MP and 25-30 parliamentary bloc member Ahmed al-Sharqawy, who was selected as a trustee.

“Nothing stands between us and the start of the dialogue except for the authorities to reach an agreement with the opposition on one name to become secretary general or chair of the board of trustees, or several names to work as dialogue coordinators alongside Rashwan. This is expected to happen before the end of July,” Sharqawy explained.

For his part, former presidential candidate and leading member of the Civil Democratic Movement Hamdeen Sabbahi considered the announcement of the board to be a positive step, saying in a Facebook post that its composition is diverse and includes figures capable of conducting a serious and fruitful dialogue.

Sabbahi added that he hopes the coming days will witness a consensus on the name of a secretary general or a number of coordinators, as well as the beginning of the agreed-upon release of larger groups of political prisoners, which he sees as a necessary prelude to launching the national dialogue.

A Civil Democratic Movement member, who spoke to Mada Masr on condition of anonymity, interpreted Sabbahi’s statements to mean that the opposition has no explicit objections to the names chosen for the board. The member explained that the movement proposed five names, of which only two were chosen: journalist Abdel Azeem Hammad and businessman Kamal Zayed.

“We cannot object to those who were chosen, but we would have liked others with clearer political positions to have been picked,” the source added.

Regarding the ongoing consultations between the authorities and opposition on the organization of the dialogue, the movement member noted that Rashwan opposes having someone appointed in a position above his role as general coordinator. Rather, he wants more coordinators appointed alongside him — a proposal the authorities support. The opposition, on the other hand, demands the appointment of a secretary general or chair of the board of trustees and has proposed doctor and activist Mohamed Ghoneim among others to take this position.

Such appointments appear to be vital for the consultations on the agenda of the dialogue and its priorities to move forward.

Sharqawy said the role of the National Training Academy — an organization directly overseen by the president — as the dialogue’s managing body has come to an end with the announcement of the board, which will now handle determining the rules for the dialogue, its priority files, dates and agenda, as well as managing its affairs and articulating its outputs.

The first task, he noted, is inviting the participants to the dialogue. The names, however, are yet to be determined, according to Sharqawy, who explained that the training academy has asked several figures and institutions to submit their proposed invitees.

Regarding Rashwan’s comments about figures affiliated with the Muslim Brotherhood wishing to participate, Sharqawy said that anyone who holds Egyptian citizenship and has not been convicted or prosecuted for violent crimes is welcome to the dialogue. However, the one thing the authorities and opposition have settled on so far regarding the participants is that all topics on the agenda are to be discussed before representatives of the whole spectrum, and that unilateral decisions will not be made by the state’s representatives, he said.

As for the expected outcomes of the dialogue, the 25-30 bloc MP said the dialogue is expected to be followed by a change of government, legislative amendments and direct reforms that Egyptians will feel directly. “What is the point of it otherwise?” he said, adding that the dialogue is set to continue for an extended period of time to cover various files and issues.

President Abdel Fattah al-Sisi called for a political dialogue at the end of April that would include “all” political forces. On May 10, the training academy announced that it would take over managing the forum. Rashwan was then chosen as the general coordinator of the dialogue on June 8, and a July 1 date was set for the sessions to launch.