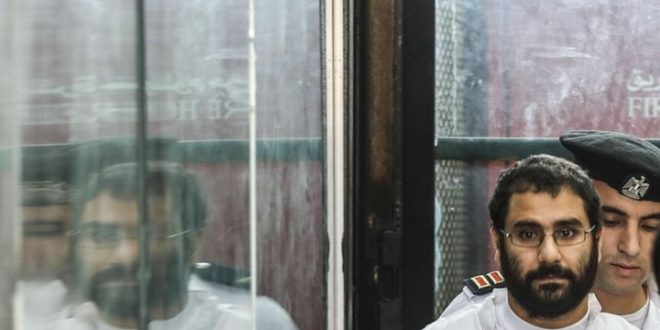 Egyptian lawyer Khaled Ali on Thursday said prison authorities have denied him access to Egyptian-British political prisoner Alaa Abd el-Fattah, who has not been allowed lawyer visits since 2020, despite having acquired an official permit, the first in over a year.

Abd el-Fattah, who was an icon of the 2011 Egyptian revolution, has been on hunger strike since 2 April in protest against the Egyptian authorities’ refusal to allow UK officials to meet with him after he became a British citizen.

He is currently held in Wadi el-Natrun prison, after his transfer from the notorious Tora prison last month.

Ali said it was the first time that he had been refused access to a client after acquiring permission, making him concerned about Abd el-Fattah’s condition and the reasons behind the rejection of his visit.

“Alaa has been on hunger strike for 69 days. I am alarmed. Refusing me entry despite a permit from the prosecution has no justification other than coming between Alaa and his defence team, and preventing us, without any legal basis, from examining his state and his conditions inside the prison,” Ali wrote on Facebook.

Egyptian prison authorities have not yet admitted Abd el-Fattah’s hunger strike, either publicly or in prison records.

On Thursday, the interior ministry said in a statement that it has handed over to the public prosecution’s office video clips from inside Ab el-Fattah’s cell proving that reports of his hunger strike are false.

Abd el-Fattah’s family has maintained that his hunger strike is ongoing and denied prison reports that it has been providing him with food on a weekly basis.

Ali said on Thursday that Abd el-Fattah’s legal team has submitted three notices to the prosecution to prove the hunger strike and to seek evaluation of his health condition.

On Monday, a delegation from the government-appointed National Council for Human Rights (NCHR) visited Wadi el-Natrun prison and said the activist’s medical file indicated that he was in good health and not on hunger strike.

Abd el-Fattah’s family denounced NCHR’s report for repeating the prison administration’s false allegations and for not attempting to visit him and check his condition.

The activist’s mother Laila Soueif told Egyptian news outlet Darb on Monday that as far as she knows, her son has not been medically examined since 18 May.

Abd el-Fattah was granted UK citizenship in April through his mother, who is also a British citizen.

His family, which has been lobbying London to intervene in his case, said last month that Abd el-Fattah is willing to revoke his Egyptian citizenship if that would lead to his release.

In recent years, a handful of dual nationals among the estimated 65,000 political prisoners in Egypt have been freed by President Abdel Fatteh el-Sisi’s government after relinquishing their Egyptian citizenship.