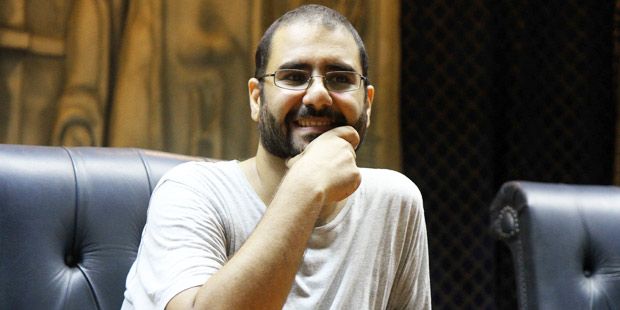 The aunt of imprisoned Egyptian activist Alaa Abdel-Fattah has accused Egyptian authorities of intending to let him to “die”, in a series of tweets posted onto social media on Tuesday.

Ahdaf Soueif, a critically-acclaimed novelist, also said that Egypt is blocking UK consular access to Abdel-Fattah, despite being a dual British citizen. She also added that Egypt’s National Council for Human Rights (NCHR) NGO was prohibited from seeing him.

IMPORTANT
We are starting to think that it’s the intention of Egypt Gov to let Alaa die in prison.
They continue to block UK Consular access to him.Yesterday they did not allow their own “National Council for Human Rights” to see him. #FreeAlaa #FreeThemAll pic.twitter.com/4tXUiQjHGA
— Ahdaf Soueif (@asoueif) June 7, 2022

Soueif, who alongside Abdel-Fattah’s mother and sisters have tirelessly campaigned for his release, explained that Abdel-Fattah’s continuous isolation means that the only people who get to see him are his three prison cell mates, and one family member who is allowed to visit once a month.

She also accused authorities for fabricating claims that Abdel-Fattah is not on a hunger strike, and is receiving “three meals a day”, despite official reports stating that he has been on hunger strike for almost 70 days, starting on 2 April.

We have already pointed out that Alaa is not able to reject delivery of the (actually) 2 meals a day because they are slid through a hatch in the door and then the hatch closes. He is content for his cell-mates to eat his rations.
— Ahdaf Soueif (@asoueif) June 7, 2022

Soueif also raised alarms concerning Abdel-Fattah’s health, whose vital signs were reported as “normal” by the NHCR. She expressed that journalist and family friend Hassan El-Banna Taher, who was previously jailed, pointed out that four previously-jailed people had died despite prisons insisting that their “vital signs were normal”, including Shady Habash.

Habash was jailed, without trial, in March 2018 after making a music video for the exiled Egyptian rock musician Ramy Essam, which mocked the Egyptian president, Abdel Fattah Al-Sisi. Authorities claimed he died of alcohol poisoning after more than two years in pretrial detention.

Abdel-Fattah is a key figure in Egypt’s 2011 revolution that led to the toppling of then President Hosni Mubarak. He has been detained and sentenced by Egyptian authorities on multiple occasions over the past decade. He was mostly recently arrested in September 2019, and subsequently sentenced to five years in prison in December last year and ordered to spend his jail time in the country’s infamous high-security Tora prison complex.

Last month, he was transferred to the Wadi Al-Natroun prison, where he was given permission to sleep on a mattress for the first time in years.

His family has continuously stated that he has been constantly denied access to books, exercise time outside his cell, regular visits, and adequate medical care.