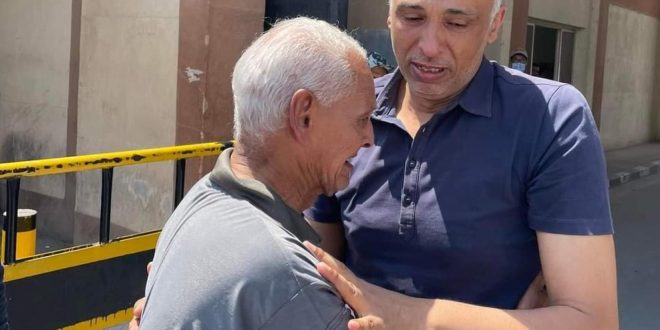 Mohieldin’s release comes a day after the Egyptian authorities released Yahya Hussein, the coordinator of the Civil Movement who is known for his campaigns against corruption.

All the released detainees were arrested almost three years ago on charges of “spreading false news”, a common accusation against government opponents.

Laywer Muhammad Ahmed wrote on Thursday that the Supreme State Security Prosecution, which handles charges of terrorism and threats to national security, had released nine Egyptians, including three women, from three separate cases launched between 2021 and 2022.

President Abdel Fattah el-Sisi has repeatedly denied that his country holds any political prisoners, but his administration has recently launched an initiative to pardon prisoners detained in connection with political cases.

More than half of all prisoners in Egypt are political, according to the Arabic Network for Human Rights Information.

The Presidential Pardon Committee, tasked with facilitating prisoners’ release, was launched on 26 April during Ramadan, the month when presidential pardons have traditionally been handed out.

Translation: A short while ago, the translator Kholoud Saeed, Engineer Mohamed Mohieldin, and Hussein Khamis, were released, Thursday, from prison pending various cases. On Monday, the Public Prosecution decided to release Kholoud Saeed and others, pending various political cases.

Sisi rose to power after ousting Egypt’s first democratically elected president, Mohamed Morsi, a leading figure in the Muslim Brotherhood, in a 2013 military coup. Since then, his government has targeted members and supporters of Morsi’s administration in a widespread crackdown. More recently, Sisi has also targeted the secular opposition.

Tariq Al-Awadi, a member of the presidential pardon committee, said on Monday that the number of prisoners included in the amnesty lists is 1,074. Only 21 of these have been released since April.

Amnesty International on Tuesday called on the Egyptian authorities to exclude security agencies from the process of reviewing decisions on whether to grant pardons to political prisoners.

“We welcome the long-overdue release of those detained solely for exercising their human rights – and the promise to free more,” said Amna Guellali, Amnesty’s deputy director for the Middle East and North Africa.

“Yet thousands of opponents and critics continue to languish in Egyptian jails, while fresh arrests and prosecutions continue unabated,” she said, calling on the authorities to “immediately and unconditionally release anyone detained solely for exercising their human rights”.

The prisoners’ release comes after an Egyptian court on Sunday sentenced former presidential candidate Abdel Moneim Aboul-Fotouh to 15 years in prison for “spreading false news” and “incitement against state institutions”.

Ahmed Taha, a journalist and news presenter working with Al Jazeera Media Network since 2011, was sentenced in the same case to 15 years in absentia for interviewing Aboul-Fotouh in 2018 to discuss the presidential elections.

Aboul-Fotouh, 71, was arrested in 2018 after he joined a call to boycott that year’s presidential election, which Sisi won in a landslide after all candidates – except one, who was his ally – were either arrested or excluded.