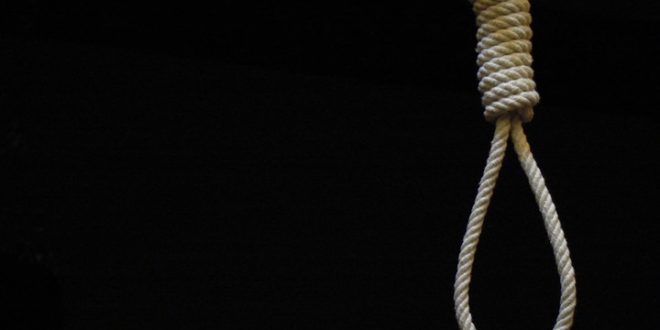 Iran, Egypt and Saudi Arabia accounted for 80 percent of all known state-sanctioned executions worldwide in 2021, according to a bombshell report by Amnesty International.

The Middle East and North Africa, home to the world’s top executioners, saw a 19 percent rise in state killings in 2021 compared to 2020, according to the human rights group’s 66-page document, ‘Death Sentencing and Executions 2021’.

Iran accounted for 60 percent of state killings in the region, with 314 documented deaths.

Egyptian authorities are known to have executed 83 people, and Saudi Arabia 65. 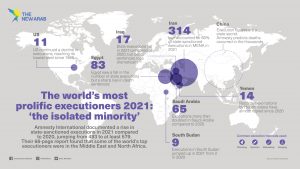 Globally, documented state-sanctioned execution rose in 2021 from 2020, largely due to Iran, from 483 to 579. However, levels worldwide were still at their second-lowest since 2010, indicating that the death penalty continues to be used by an “isolated minority” said Amnesty.

“Globally it’s a positive trend, the world is moving, albeit slowly, towards the full abolition of the death penalty. The Middle East somewhat bucks this trend and China, Vietnam and North Korea are worrying, but it is only a matter of time before the death penalty is abolished,” Oluwatosin Popoola, a legal adviser to Amnesty International and one of the report’s authors, told The New Arab.

Amnesty acknowledged that figures were likely to be much higher in reality given deliberate obfuscation by authorities over state executions.

No specific data was provided on China, for example, where authorities have orchestrated a systematic campaign, labelled as a “genocide” by a UK-based tribunal, to suppress Uyghur and other Turkic Muslim minorities in Xinjiang province. The rights group estimated that state executions have taken place in the thousands in China. However, it has not released figures on the People’s Republic since 2009 due to “misrepresentation” of Amnesty data.

Data on North Korea and Vietnam are also omitted due to state secrecy and the difficulties of independently verifying reports.

The lawyer added that when worldwide campaigns calling for the abolition of the death penalty first started in 1977 only 16 countries had outlawed capital punishment. Today it’s 108 countries.

Nevertheless, despite these gains, Amnesty’s report offers a sober warning: “[it is] not yet time to let off pressure”.

“It is a cruel and inhumane punishment,” said Popoola. “Taking a life is not the solution.”

At least 579 executions were known to have been carried out across 18 countries last year. That’s 579 executions too many. It’s time to abolish the death penalty!https://t.co/Wmbakm8Od2
— Amnesty International (@amnesty) May 24, 2022

Around 314 people were executed in Iran in 2021, a 28 percent increase from the previous year, according to Amnesty’s report.

Noticeably, there was a spike in executions in September, at least 48, the month after hardliner Ebrahim Raisi came to power.

“We can’t say whether there is a link between Raisi and the increasing deaths,” said Popoola. “Iran has been a top executioner for years, it’s routine. [It is likely] the executions would have been carried out anyway.”

Over 50 percent of state executions in the Islamic Republic were linked to murder charges.

132 people, however, were killed due to drug-related crimes, a five-fold increase from the previous year.

Iranian law allows the death penalty to be used as punishment in circumstances that do not “meet the threshold under international law,” explained Popoola. For example, he added, they don’t examine whether a killing was intentional.

When asked about the rise in drug-related executions, he said: “[Drug crime] is not unique to Iran. However, there will be a high number of deaths if you consider it a capital offence.”

Official sources reported none of the drug-related executions, according to Norway-based Iran Human Rights (IHR). The rights group has continued to document several killings linked to narcotic crimes, including three on May 18 this year alone, indicating that this trend shows no sign of slowing down.

In their report, Amnesty accused Iranian authorities of conducting grossly unfair trials, in which suspects were often denied access to a lawyer and verdicts were based on “confessions” obtained under torture. Families of the convicted, they said, were unable to say their last goodbyes as executions take place in secret.

One individual named in the report was Sajad Sanjari, who was one of three people in Iran executed in 2021 for crimes committed as a minor. He was 15 at the time of his alleged offence. He was hanged in secret. His charge: murdering a man who was trying to rape him.

The number of state-sanctioned executions more than doubled in Saudi Arabia from 27 in 2020 to 65 in 2021, according to Amnesty.

The majority were for murder charges, while over a dozen were connected to terrorism-related offences.

18 of those killed were foreigners.

Amnesty accused the kingdom of conducting trials that “did not meet international standards,” and, like Iran, of obtaining “confessions” under torture.

“Saudi Arabia still has a long way to go” when it comes to the death penalty, said Popoola.

The lawyer added that the kingdom’s move to stop the execution of children was “recommendable,” but added: the fact Saudi Arabia killed 81 people on one day in 2021 means there is still far to go.

Amnesty’s report drew particular attention to the executions of dissents in Saudi Arabia. This includes the killing of Mustafa al-Darwish, a young Saudi man from the Shia minority who was convicted of charges related to his alleged participation in violent anti-government protests.

Egypt, unlike Iran or Saudi Arabia, recorded a dramatic decrease in the number of state-sanctioned killings, dropping by 22 percent in 2021 compared to 2020, reported the rights group.

However, Amnesty maintained that the North African country was “one of the world’s main executioners”.

“The fall should not be taken as a sign of progress,” said the lawyer. “Egypt is still a prolific executioner.”

Namely, the number of death sentences handed out by Egyptian authorities skyrocketed, with at least 356 people sentenced to death in 2021, a 34 percent rise on the previous year.

Mass trials continued to be commonplace, which are “unfair by their very nature,” said Amnesty as individuals aren’t given a fair ruling or adequate time to appeal allegations.

On 26 April, during the holy month of Ramadan, the Egyptian authorities executed nine people, including an 82-year-old man. Their court case was condemned as defendants were denied access to their lawyers and coerced to “confess,” said Amnesty.

Justice
All
2022-05-24
asaeid
Previous National Security Agency intervenes to block candidates from running in labor elections
Next US ‘negotiating deal between Saudi Arabia, Israel and Egypt’