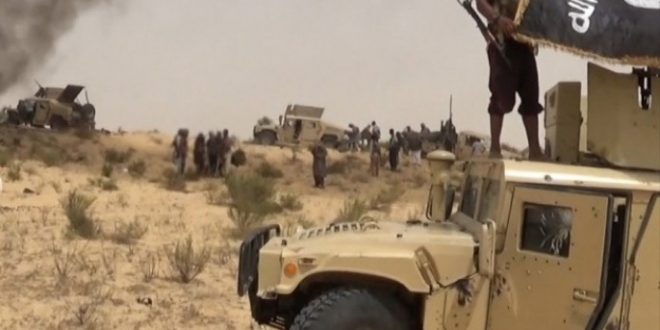 Province of Sinai, the Islamic State affiliate in Egypt, claimed responsibility on Sunday night for killing 17 military personnel in a Saturday attack on a water pumping station in an area east of the Suez Canal.

While local media reports — some of which have been removed — named 17 military personnel it said were killed in the militant operation, an Armed Forces statement on Saturday said that 11 soldiers were killed in the attack and five others were wounded.

The military spokesperson’s statement was later edited to describe the location of the attack as being in “western Sinai,” as opposed to “east of the Suez Canal.”

Local sources in the Jafajfa area in central North Sinai, near the site of the attack, told Mada Masr that the militants had targeted the Aram 2 water pumping station, less than 30 kilometers east of the canal, in an area of the peninsula that falls within Ismailia Governorate.

The attack, the deadliest to take place over the last two years, is the latest in a series of militant operations that have targeted sites in Bir al-Abd and its surrounding areas in western North Sinai over recent months, far from the militant group’s former stronghold on the eastern edge of the peninsula.

“Light and medium weapons were used for the attack,” said Province of Sinai, which claimed on Sunday that the operation was conducted “to avenge the captured Muslim women in Rafah.”

According to sources involved in the state-allied Union of Sinai Tribes’ activities on the ground who spoke to Mada Masr on condition of anonymity in April, eleven women and several children turned themselves in to authorities that month after union fighters supported by the Armed Forces killed five militants, including a prominent leader, during a campaign on Muqata village in Sheikh Zuwayed.

Statements regarding the militant group’s activity shared via the Telegram messaging application at the time of the campaign claimed that the women were attempting to move to a safer area but were intercepted by members of the tribal union and handed over to authorities.

According to coverage published by local news outlets on Saturday, 17 military personnel killed in Saturday’s attack were buried on Sunday in their home governorates.

Funerals for conscripts from the governorates of Port Said, Gharbiya, Kafr al-Sheikh and Daqahlia were held on the same day.

The names in the news reports matched 17 names shown in a photo that began to circulate on social media on Saturday afternoon, purported to be of a list of the casualties of the attack.

Two small news outlets advised their reporters not to send any coverage of the Sunday funerals of any attack victims, a contributing reporter with those outlets told Mada Masr on condition of anonymity. Other outlets removed online coverage of funerals that they had already published.

Province of Sinai has intensified attacks on villages to the south of Bir al-Abd and in western North Sinai over the past two months.

After the group was forced westward from Rafah and Sheikh Zuwayed by a major military operation launched by the Armed Forces in 2019, it began to refocus its militant activity against military personnel and civilians in areas that include central Sinai and Bir al-Abd. The group has stormed several villages and carried out kidnappings and executions, reaching sites east of the Suez Canal that fall within Port Said and Ismailia governorates, such as the villages of Jalbana and Sahl al-Tina.

At the end of April, the group published footage showing the execution of a civilian farm worker from Jalbana, claiming he was collaborating with the Armed Forces. Footage of militants killing two young men from the al-Dawagrah tribe, one of the largest tribes in Bir al-Abd, was also recently circulated online. In mid-March, footage was published of the execution of a civilian from Assiut Governorate who was working on a farm on Aram Road, the site of Saturday’s attack, and who militants likewise accused of collaborating with the military.

The Aram station attack comes about a week after President Abdel Fattah al-Sisi stated that the danger in Sinai is now limited to the explosive devices left behind by militants in Arish, Rafah and Sheikh Zuwayed, and that, once these are removed, “we can announce Sinai is free of terrorism.”

Following the attack, Sisi presided over a meeting of the Supreme Council of the Armed Forces on Sunday, where he reiterated his instructions to continue all efforts to eradicate terrorism in Sinai.