Documents leaked to the London-based Arabi21 news site reveal that Sisi issued a decree to pardon police officers to mark National Police Day on 25 January, which is also the anniversary of Egypt’s 2011 revolution.

The documents, leaked by a prominent Egyptian security source, state the names of police officers who were convicted in three cases for torturing Egyptian citizens to death in various police stations.

“By using his power in presidential pardon, Sisi intends to protect the army and police from accountability,” Ahmed Mefreh, director the Gevena-based Committee for Justice (CFJ), told Middle East Eye.

In the few cases in which civil society pressure and the gravity of crimes committed has led to charges against police officers reaching court, Sisi has “covered their backs by pardoning them”, Mefreh said.

“The regime exploits the media coverage of presidential pardons as propaganda to cover the crimes of the army and policemen convicted by courts,” he said.

Five police officers convicted by a court in 2020 for torturing to death Magdy Makeen, a 53-year-old fish vendor, were included in Sisi’s pardon.

They were working at a police station in al-Amireyah in Cairo in November 2016 when Makeen was taken in, later dying in custody. The following month, ten policemen were charged with torturing him to death.

Egypt’s public prosecution charged them with assaulting Makeen so badly that he died inside the police station, and forging the official documents of the incident to mislead the investigation.

Makeen was beaten while in custody, according to a forensic report. Police officers stood on his back, causing damage to his spinal cord and nervous system, but it was a clot he developed in his lungs that killed him.

The officers were named in Sisi’s pardon decree as Sameh Qassem, Yasir al-Hassanein, Saad Khalil, Mohammed Ali and Aymen al-Deeb. The five other police officers convicted for torturing Makeen were not pardoned.

There are 65,000 political prisoners and 26,000 people in pre-trial detention in Egypt, according to the Arab Network for Human Rights Information. 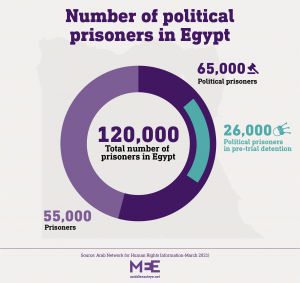 “The basis for Sisi’s use of the presidential pardon is to protect murderers and criminals from the army and the regime’s men,” he told MEE.

He added that even in cases where the Egyptian government released journalists and human rights activists from jail, it was “due to the intense pressure exerted from the international community or as an attempt by the regime to reduce the internal tension triggered by the economic problems in the country”.

On Wednesday, the Egyptian government pardoned Hossam Moniss, a prominent leftist organiser and journalist, who was sentenced to four years imprisonment in November over “spreading false news”.

Torture in Sohag and Cairo

The presidential decree pardoned Egyptian police officers convicted in torture cases in 2016 and 2018.

The 2018 case took place in the Hadaeq El Qobba police station in Cairo. Five officers were pardoned, including Saber Farraj, a major and chief of detectives in the station, who was sentenced to eight years in prison. They were accused of arresting Ahmed Ajami, an Egyptian civilian, without a warrant and torturing him to confess to a theft.

Ajami died in the station, and the public prosecution found that the officers had beaten him with a stick, cuffed his hands behind his back, and used an electric taser on various parts of his body.

In 2016, three Egyptian police officers were accused and later convicted of killing and torturing Mohammed Saleh Ahmed in the city of Sohag, south of Cairo. All of them were pardoned in the presidential decree.

It is not uncommon for presidential pardons to be handed out before public or religious holidays in Egypt.

Rights groups have long called for the release of the tens of thousands of political prisoners held in the country’s jails since Sisi came to power in a coup in 2013.

This week, four social media comedians were arrested on charges of terrorism and spreading false news after posting a song online that satirised the authorities’ failure to rein in rampant inflation.