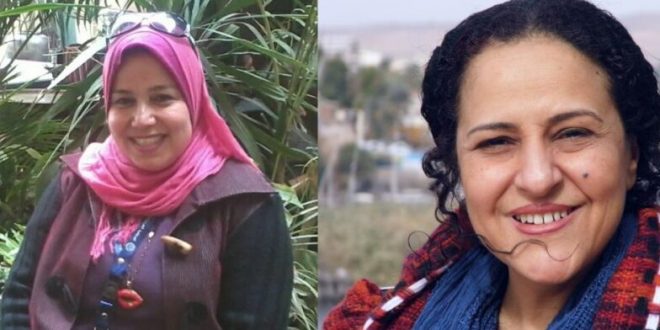 TV presenter Hala Fahmy and journalist Safaa al-Korbagy, two outspoken critics of senior management at the National Broadcasting Authority, appeared before the Supreme State Security Prosecution in recent days, according to their lawyers.

Korbagy and Fahmy both participated in state media worker protests that began in January and shared videos of their support for the strikes on their social media accounts, in which they also voiced criticism of working conditions in state media, and, in Fahmy’s case, of the president.

Korbagy was arrested on Thursday from her Moqattam home where she lives with her mother, and she remained forcibly disappeared for three days before being presented before the prosecution, her lawyer Ali Ayoub told Mada Masr.

“Security forces came to Korbagy’s house at around 3 am on Thursday and broke into the apartment. They searched it, cut the internet wires, confiscated a laptop and tablet, and scattered the contents of the apartment. My client was allowed to change her clothes and prepare a bag before she was taken to an unknown location,” he explained.

Authorities denied that Korbagy was being held in State Security Prosecution custody when Ayoub made enquiries on Thursday, he said. Yet, on Sunday, he was informed that she had been in their custody since the day of her arrest.

During her disappearance, Korbagy was questioned by the prosecution without a lawyer present, said Ayoub, “a violation of the Constitution and the law governing the legal profession.”

Journalists Syndicate head Diaa Rashwan was informed of Korbagy’s disappearance so that he could take steps to follow up on her case with the relevant authorities, syndicate member Mahmoud Kamel told Mada Masr.

Korbagy published videos on her Facebook account that showed her participating in protests that began in January against the National Broadcasting Authority over poor working conditions and overdue payments alongside thousands of state media workers.

She was fired from her job at Radio and Television magazine early in 2022. Ayoub said that Korbagy’s firing, which coincided with her taking sick leave, constituted an arbitrary dismissal, adding that he lodged an appeal against the decision.

On the same day of Korbagy’s arrest, TV presenter Hala Fahmy became unreachable. On Sunday, Fahmy was arrested and questioned by the prosecution without being granted access to legal representation, said lawyer Khaled Ali, who is now acting in Fahmy’s defense.

Ali only learned of her detention as the prosecution was set to resume her questioning on Tuesday, when Fahmy told other lawyers who were present to contact him on her behalf, he said. She was handed 15 days in remand detention.

Fahmy’s last appearance in public took place a week before her arrest, when she posted two videos on her personal Facebook account. In the videos, she claimed she was facing espionage charges for sharing a post campaigning for confidence to be withdrawn from the president.

She also said that she and her friend had been followed by strangers for days. She noted that she sought help from the Nozha police department in Cairo, but that they refused to lend her any assistance.

Fahmy was also among the state media workers who took part in the January protests. She called for the demonstrations to be escalated into a sit-in at the headquarters of the Egyptian Radio and Television Union in videos she posted on Facebook.