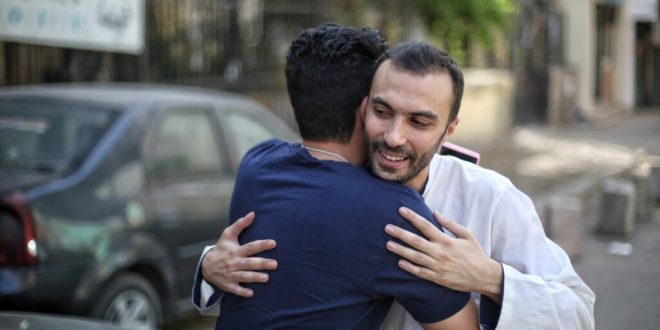 At least six political detainees, who were held for years in detention without trial or investigation, were released on Sunday by order of the State Security Prosecution, lawyers told Mada Masr.

All were facing charges of joining a terrorist group and spreading false news on social media.

More releases could be forthcoming, according to National Council for Human Rights member Mohamed Anwar al-Sadat. In a Sunday statement, Sadat said releases have been secured over the coming days for a total of 41 people, all of whom have “political backgrounds” and have been in prison facilities pending investigation into political cases, said the statement.

Sadat is also the head of the Reform and Development Party and of a lobby group that acts as a broker with security agencies to secure the release of political prisoners.

While Sadat did not name the 41 detainees, MP Tarek El Khouly of the Coordination of Party Youth and Politicians published 11 names on social media he said were likely to be released. In addition to four of those released on Sunday, Khouly listed “Amr Imam, Abdo Fayed, Ahmed Allam, Abdel Aleem Ammar, Radwa Mohamed Halloul, Abdel Rahman Bassiouni and Hamed Mohamedin.”

Genady confirmed to Mada Masr that procedures are underway for release orders to be implemented for Halloul and Imam.

The National Security Agency headquarters in Abbasseya carried out the six releases on Sunday, said a lawyer who witnessed some of the releases and spoke to Mada Masr on condition of anonymity.

Rumors of the imminent release orders prompted defense lawyers to gather at the Abbasseya site on Sunday morning in an attempt to confirm whether their clients would be released. While the six detainees were released, security forces did not provide any further information regarding potential further releases, said the lawyer.

Addressing the broader implications of the decisions, Khouly said that they come “as a preliminary step to the restitution of the presidential committee for pardoning prisoners.” The MP said he expected the committee’s role to expand to include amnesty for imprisoned debtors and political prisoners.

Sadat likewise said that over the coming period, legal and humanitarian reforms will lead to the release of more of those held behind bars who meet the conditions for full or conditional presidential pardons.

“It has become clear that there is a real political will to improve and develop” the human rights situation, said NCHR chair Moushira Khattab in a Sunday statement, noting that the council welcomed the release of the detainees and was optimistic about the future.

There has been increased scrutiny on Egypt’s human rights situation in recent weeks, with the high profile death of Ayman Hadhoud, 48, an economic researcher and a member of the political party headed by Sadat, as well as hunger strikes by a number of political prisoners.

Hadhoud was forcibly disappeared in February and taken by authorities to hospital premises where he died and was left in the site’s mortuary facilities for weeks before his family was informed.

Amnesty International called in April for authorities to release investigation documents relating to the death of Hadhoud, citing evidence it procured that it said “strongly suggests” that Hadhoud was tortured or otherwise ill-treated before his death.

The US administration has consistently conditioned a small portion of its annual $1.3 billion defense allocation to Egypt on improvements to human rights conditions in the country. In September 2021, the US withheld around $130 million, conditioning the funds on Cairo ending a protracted legal investigation of civil society organizations and dropping charges against or releasing 16 individuals the United States has identified and raised with Cairo since June, officials told the Washington Post at the time. The US government nevertheless approved a $2.5 bn arms sale to Egypt at the beginning of this year.