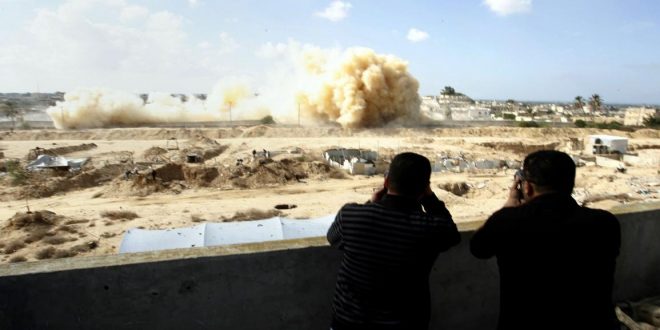 After years of fighting the Islamic State branch in the Sinai Peninsula, the Egyptian military, backed by tribal fighters, is making progress in clearing out the area of militants and calling on citizens to return to villages they were forced to leave.

Army troops have recently retaken the last two IS strongholds in North Sinai, allowing their residents to return.

Hundreds of families from the North Sinai villages of Motla and Huseinat, located east of the town of Sheikh Zuweid, fled their homes a few years ago when IS overran the areas and was expanding in different parts of the province, dealing heavy blows to the military and police.

Thousands of Sinai villagers were also forced out of their hometowns since 2013 by the Egyptian military’s policy of demolishing homes in the province in the name of counter-terrorism.

The army’s campaign has succeeded in regaining control of the two villages after enlisting help from tribal fighters. Together they have managed to tighten control over IS supply routes and chase its members out of most of the territory.

“The terrorists are escaping already after the army succeeded in tightening the noose around them,” retired army general Nasr Salem told Middle East Eye. “The army has been working to do this for a long time now.”

However, the declared victories of the Egyptian army against the group come amid a series of militant attacks against army affiliates in different parts of North Sinai, including the kidnapping of some tribal leaders.

Early in April, IS militants killed two Bedouins after accusing them of collaborating with the army, raising fears that such attacks may constitute a revival of the group’s activity even after its presence has noticeably shrunk in the area.

In March 2017, Egyptian President Abdel Fattah el-Sisi said his government had moved 41 battalions, around 25,000 troops according to military experts, into Sinai to fight IS.

In 2018, the government launched Operation Sinai, an all-out campaign against the militants that includes the involvement of ground troops, the air force and the navy.

“The army invested a lot of human and material resources to eradicate terrorism in Sinai,” Salem said.

“This terrorism used to threaten people and investments in this part of Egypt, which made it necessary for the army to intervene.”

However, the campaign has been criticised as a way for the army to impose its control in the restive region through brutal force and harsh measures that have had devastating consequences on the local population.

Cairo has not released official statistics but Human Rights Watch (HRW) believes that over 100,000 of North Sinai’s 450,000 residents have been displaced or left the region since 2013.

HRW reported last year that between late 2013 and July 2020, the army demolished at least 12,350 buildings and destroyed and closed off 6,000 hectares of farmland, mostly since mid-2016, in the province.

Cairo has justified the demolitions and evictions as necessary in its fight against IS, which has carried out attacks against both civilians and military targets.

When the anti-IS military operations started in late 2013, Egypt was keen to sideline Sinai tribes from the fight for several reasons, including a longstanding distrust between Cairo and the Bedouins.

Over the years, however, Sinai’s tribes, some of whom have been living in the region for hundreds of years, have found themselves unintentionally drawn into the fight, especially when IS started killing their leaders and officials.

The army command took this opportunity to integrate the tribes in its campaign against IS, arming and training their members.

The Sinai Tribes Association, a union of Sinai tribes involved in the war against IS, has been operating against the militant group for several years now.

Association fighters participate in raids with army troops and policemen on IS hideouts and strongholds. They were also involved in recapturing Motla and Huseinat and clearing the villages’ buildings of mines.

On 19 April, the association said its fighters participated in army raids on several North Sinai villages, during which they seized huge amounts of arms and missiles.

The association has also launched a campaign to encourage IS leaders and elements to surrender to avoid death or imprisonment.

The campaign has so far succeeded in convincing some IS leaders and operatives to turn themselves over to the association and the army.

“IS is collapsing rapidly in Sinai, thanks to operations by the army and tribal fighters,” Ibrahim Abu Elian, a Sinai tribal chief, told MEE.

“This is why the leaders and the elements of the group are surrendering to the army and the tribes one by one.”

Egypt’s ability to curb IS presence in most of Sinai has led to reconstruction efforts in areas devastated by the military’s campaign to drive militants out, allowing families who fled or were forced out of their homes to return to their villages.

The Egyptian government is also encouraging Egyptians living in the Nile Valley and Delta to settle in Sinai, offering them incentives including homes and farmland at reduced rates.

Egypt hopes it can raise the province’s population of around 600,000 to three million in the coming years.

However, fears remain that the current calm will not be sustainable, considering that IS has been capable more than once to regroup and re-emerge following a series of defeats.

“This terrorist group will continue to exist so long as it receives financing and has branches in different parts of the world, especially in Africa,” retired army general Rida Yacoub told MEE.