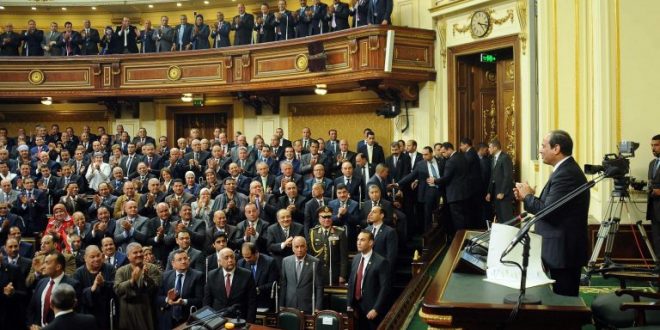 A Quick Guide to How Laws Are Made in Egypt

A potential proposal to add an article criminalizing suicide attempts in Egypt’s penal code ignited controversy on 8 January 2022, with citizens scrutinizing the possibility of Parliament passing it as a law.

Proposed laws may stir up support or outrage, but in reality, few Egyptians understand the steps it takes for a draft law to become official.

If you ever wondered how laws are created, this is your guide – taken step by step.
Step Zero: Introducing the Stakeholders

Before jumping into the steps, it is paramount to understand what the legal bodies are.

Egypt’s Parliament is a bicameral body, meaning it is divided into two chambers: the House of Representatives and the Senate.

The House of Representatives serves as the primary legislative body. The Senate assumes a role of consultation.

The Parliament works in parallel with the Cabinet of government ministries, judicial bodies such as the State Council, and the President in drafting laws.

Step One: Everything Starts at the House

“The President of the Republic, the Cabinet, and every member of the House of Representatives has the right to propose laws,” reads Article 122 of the Egyptian Constitution,

Once such a proposal is made, the Speaker of the House presents the draft law to the House. It can be read out loud or made available in documents to each of the 596 Members of Parliament (MP).

From there, either the House or Speaker directly sends the draft law to a relevant legal committee. For example, a draft law mandating psychiatric rehabilitation post-suicide attempts would be referred to a committee specialized in mental health.

MP’s can submit potential amendments to the draft to the Speaker up to 24 hours before the session during which the draft law would be discussed. In turn, the committee must submit a report on the amendments, to ensure it does not conflict with other articles of law.

Once approved by the relevant committee and the House Speaker, the draft law is directed to the Constitutional and Legislative Affairs Committee to finalize the wording.

The House then proceeds to discuss and vote on the articles of law involved in the draft, reading each article out loud in the process. Furthermore, the Cabinet, Committee Chairman, or a group of 20 Parliamentarians can request a second review session on any articles.

If all is reviewed and approved, the House holds a preliminary vote on the draft law.
Prime Minister Mostafa Madbouly addressing the House of Representatives

Part Two: A Pitstop at the State Council

The State Council, which is an administrative judicial body that oversees potential laws, must first review the wording and suitability of the articles.

If the State Council recommends changes in the draft, the House must repeat the process of sending the draft to both the relevant committee and the Constitutional and Legislative Affairs Committee.

If a review is no longer needed, the House holds a final vote on the draft, in which it will either be sent to the President or rejected.

The suggested law must have at least a two-thirds majority vote to be passed.

Any proposed law rejected by the House may not be presented again during the same legislative term.

Part Three: Does the Senate Have a Say?

The short answer is no.

Since its inauguration on 18 October 2020, the Senate serves as the other half of Egypt’s bicameral Parliament. However, it serves primarily as an advisory body to the House and President.

Article 248 of the constitution states that “The Senate is concerned with studying and proposing what it sees as a tool to consolidate democracy, support national unity, social peace, the basic values of society, supreme values, rights, freedoms, and public duties, and deepen and expand the democratic system.”

In that case, who provides the final approval for the House’s draft?

The President of the Republic acts as the last legal hurdle for a law to come into force. Article 123 of the Constitution grants the President the right to both ratify or veto proposed laws.

Constitutionally speaking, the veto power comes with its own limitations. According to the same article, if the draft law is once more voted by two-thirds of the House then it is automatically issued as law and cannot be vetoed again.

Once ratified, the law is now put into force.

Based on the purpose of the law, it is often either legislated in the Egyptian Civil Code or Penal Code. An addition or amendment to the Egyptian Constitution is rare and typically requires a referendum, as per Article 157.

Legislation
All
2022-04-03
asaeid
Previous When helping people in need is a crime: The case of Marwa Arafa
Next Egypt parliament discusses bill to combat food waste