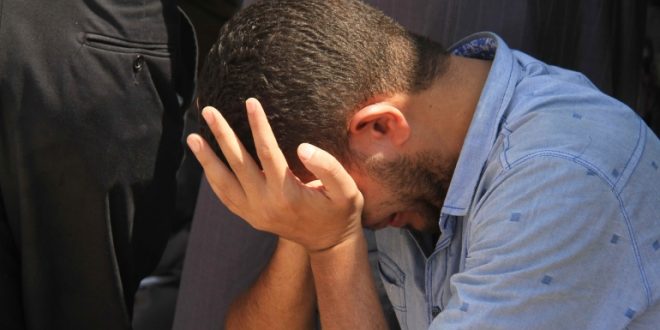 Sara and her family fled Syria for Egypt in 2012 after the civil war broke out. They have lived ever since in Cairo, where she is studying to become a doctor.

As a 23-year-old Arab woman with atypical bipolar disorder and attention deficit hyperactivity disorder (ADHD), mental health issues have troubled her for many years. However, seeking support for her problems has not been easy.

“There’s a lot of stigma and the public health services in Egypt are bureaucratic. There’s so much paperwork and the waiting times are very long. Fortunately, my family could afford for me to go private. But it was hard to convince my mum that I had a problem in the beginning. She didn’t believe me until things got really bad,” she told Al Jazeera over the phone.

Sara, whose name was changed at her request to protect her identity, is just one of many people in Egypt suffering from mental health problems. Between 30 and 35 people took their own lives each month last year, according to the Arab Foundation for Human Rights.

Suicide has been a cause for concern in the North African country for several years. In 2016, the World Health Organization reported nearly 3,800 people tried to take their own lives, which was the highest figure in the Arab world.

A report in 2018 by the Ministry of Health and Population found one-quarter of Egyptians were experiencing mental health issues.

Sara said she believes part of the problem stems from the way people with mental illnesses are treated and viewed. As a medical student, she has shadowed doctors at some of Egypt’s public mental health hospitals and said patients need to be better cared for.

“It’s very depressing and inhumane. Some of the staff are very understanding and know how to help their patients, but others don’t. They treat them as if they’re violent and have no rights. It’s like they don’t understand mentally ill people.”

‘Stepping back in time’

As a result of the high suicide rate, a member of parliament, Ahmed Mahana, has proposed the act be criminalised. If that happens, those who try to take their own lives could be punished with up to three years in a rehabilitation clinic and face a fine of up to $3,200.

Kate Ellis is a clinical psychologist and assistant professor at the American University in Cairo. She told Al Jazeera by email that criminalising suicide would be counterproductive.

“The outdated and ill-advised proposal of criminalising suicide in Egypt completely ignores the root of the problem and will only serve to increase the deep-rooted stigma in society surrounding the issue of mental health. This proposal, if successful, will see Egypt stepping back in time rather than growing as a country which protects the mental health of its people.”

Like Sara, Ellis said she believes the government needs to raise awareness of the issues at stake and should focus on challenging the causes of the problem, while improving services.

“Tackling the societal problems that often contribute to depression and suicidality should be the focus of the Egyptian government, in a society where bullying, sexual harassment and victim-shaming are prominent social problems, especially amongst younger generations.

“The government needs to focus on national awareness campaigns regarding mental health and suicide. The access to mental health services needs to be drastically improved and services need to be increased in primary healthcare facilities, rather than standalone psychiatric hospitals, which unfortunately are also the subject of great stigma. In recent years, the government has been increasing the presence of such services, but there is a long way to go.”

Talking therapies are one of the most popular forms of treatment for mental health conditions, including depression and anxiety. Psychotherapy, cognitive behaviour therapy and other contemporary techniques, however, originated in the West.

As a result, many people in the Middle East and North Africa face difficulties with this type of treatment because of social and cultural barriers. The strategies used are based upon Western scientific research and ways of thinking, and have not been produced with the Arab world or other regions and cultures in mind.

Online therapy platform Shezlong was launched in 2015 by Mohamed Alaa and Ahmed Abu Elhaz in an attempt to help clients overcome those social and cultural barriers. It matches patients with therapists and primarily serves Arabic speakers. It is the first platform of its kind in the MENA region and more than 100,000 appointments have been booked through it.

Alaa told Al Jazeera by email that conversations about mental health in Arab countries are improving, but says more needs to be done.

“There’s been a huge improvement in the awareness of the benefits of therapy in our region. Also, celebrities now talk publicly about their mental health, as well as actors. But I believe governments need to start working on national projects, including awareness campaigns that make people more familiar with the benefits of seeking help when needed.”

Egypt is not the only Arab country experiencing a decline in mental health, with Iraq and Kuwait both seeing an increase in suicides, according to reports. Academics say the MENA region would benefit by funding more mental health research, with many people enduring psychological and physical trauma because of war and sectarian violence.

A study published in 2020 by researchers from the American University of Beirut suggested that doing so could help people return to normal life.

He also encouraged trainee doctors to choose mental health as their specialty and said the government plans to develop and improve mental healthcare services.

Al Jazeera contacted the Ministry of Health and Population for comment, but did not receive a reply.

Health Situation
All
2022-03-18
asaeid
Previous Egypt’s and Sudan’s chiefs of staff discuss military cooperation in Cairo
Next Egypt: Bahira Elshawi dies after ‘courageous fight’ to release her husband and son from jail