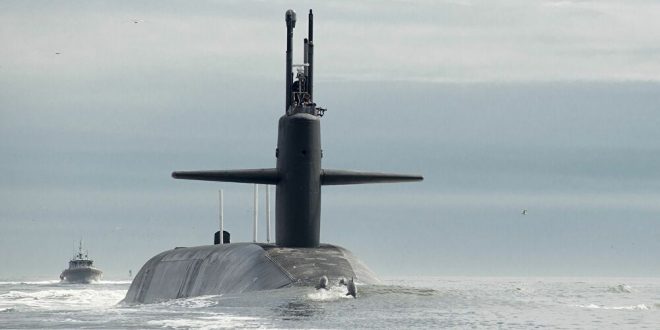 Between 2013 and 2020, EU countries (including the United Kingdom) exported or licensed at least $12.4bn worth of arms to Egypt, according to Campaign Against Arms Trade (CAAT).

Over the same period, EU countries – excluding the UK – exported at least $4.6bn worth of arms to Egypt, according to the Stockholm International Peace Research Institute (Sipri).

In the days following the state-sponsored mass killings of anti-coup protesters in Cairo’s Rabaa and al-Nahda squares in August 2013, the EU Foreign Affairs Council announced that EU member states had agreed to suspend export licences for any weapons that may be used for repression.

The partial arms embargo was not legally binding, however, and many EU member states have subsequently continued to supply the Sisi government with arms. 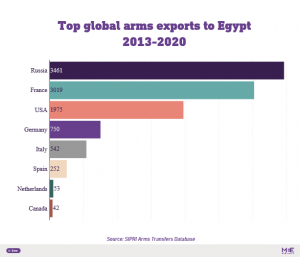 The EU parliament in 2016 called for the suspension of security cooperation with Cairo, and condemned arms deals between Egypt and France, Germany and the UK.

The parliament called on EU member states to put an end to their “short-sighted and delusive approach to Egypt’s security forces as a guarantor of stability and a partner to fight violent extremism and terrorism in the region”.

According to Sipri, between 2013 and 2020 France was the top EU exporter of arms to Egypt and the second globally after Russia, surpassing the United States. The volume of arms exports from France has increased dramatically in comparison to the years preceding Sisi’s rule.

In December 2020, French President Emmanuel Macron declared he would not make arms sales to Egypt conditional on human rights, because he did not want to weaken Cairo’s ability to combat militancy in the region.

German weapons sales to Egypt have also surged, by 205 percent between 2013-2017, according to analysis by the Tahrir Institute for Middle East Policy, while Italy is reportedly in talks with Egypt over a potential arms deal worth €10bn ($11.3bn). 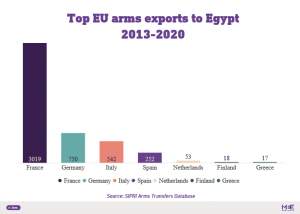 In February, nearly 200 frontline European politicians signed a letter calling on the United Nations Human Rights Council (UNHRC) to establish a monitoring and reporting mechanism on Egypt to address the country’s “human rights crisis”. The letter urged the UNHRC to take “resolute action” ahead of the council’s upcoming session in March. 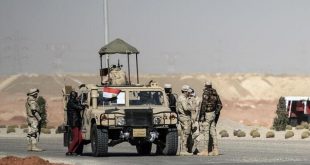