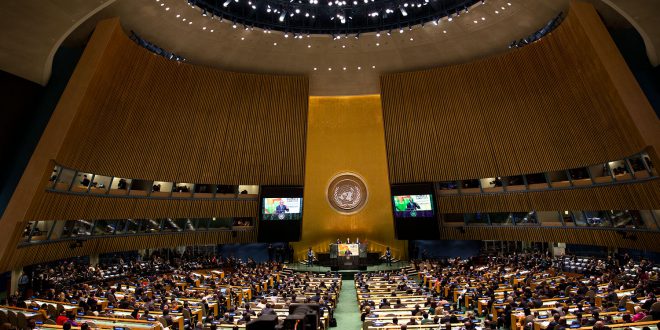 President Barack Obama delivers remarks at the UNGA Climate Summit 2014 in the General Assembly Hall at the United Nations in New York, N.Y., Sept. 23, 2014. (Official White House Photo by Lawrence Jackson) This official White House photograph is being made available only for publication by news organizations and/or for personal use printing by the subject(s) of the photograph. The photograph may not be manipulated in any way and may not be used in commercial or political materials, advertisements, emails, products, promotions that in any way suggests approval or endorsement of the President, the First Family, or the White House.

The United Nations has voted overwhelmingly in an emergency session of the UNs general assembly on Wednesday March 2, 2022 for a resolution deploring Russias invasion of Ukraine and called for the immediate withdrawal of its forces, in a global expression of outrage that highlighted Russias increasing isolation. 141 of the 193 member states voted for the resolution, 35 abstained, and five voted against.

The only countries to vote no in support of Moscow were Belarus, North Korea, Eritrea and Syria. Longstanding allies Cuba and Venezuela joined China in abstaining.

Egypt, Saudi Arabia and the United Arab Emirates joined 138 other nations on Wednesday to vote in favor of a United Nations General Assembly resolution demanding Russia halt its invasion of Ukraine and withdraw all troops.

The move by the three regional power brokers came just two days after they signed onto an Arab League statement that did not condemn Russia and instead called for diplomacy, an avoidance of escalation and consideration of the humanitarian situation.

The UN General Assembly vote was also an about-face for the UAE, which abstained from a UN Security Council resolution last week demanding Russia cease its invasion of Ukraine. The UAE, a non-permanent member and the current president of the security council, joined China in abstaining while the resolution was vetoed by Russia. At the time, senior Emirati diplomatic adviser Anwar Gargash justified the decision by saying that the UAE “believes that taking sides would only lead to more violence.”

Wednesday’s vote came after the 193-member assembly convened its first emergency session since 1997. The resolution deplored Russia’s “aggression” against Ukraine “in the strongest terms” and demanded an immediate halt to Moscow’s use of force and the immediate, complete and unconditional withdrawal of all Russian forces from Ukraine’s internationally recognized borders.

The resolution passed by a 141 to 5 vote, with 35 abstentions. The five countries to vote against the resolution were Russia, Syria, Belarus, North Korea and Eritrea. Algeria and Iraq, which have strategic ties to Russia, abstained. Iran and Sudan also abstained in what a Western diplomatic source in Cairo told Mada Masr was a clear message to the West from the two countries.

Meanwhile, China, which announced large energy and commodity deals with Russia shortly before the invasion, voted for the resolution after abstaining in the security council vote last week.

Egypt explained its vote in a statement on Wednesday by the country’s permanent representative to the UN, Osama Abdel Khaleq, saying the resolution should not lead to turning a blind eye to the root causes of the crisis and that the main goal should be a rapid political solution.

Earlier on Wednesday, the head of the Suez Canal Authority denied rumors that the United States had asked Egypt to close the canal to Russian ships due to the invasion.

Egypt has been under pressure from all sides to make public statements declaring support for either side. While the Russian embassy in Cairo has actively been advocating for Egypt to take a pro-Moscow stance, G7 ambassadors in Cairo issued a joint statement on Monday demanding greater public support from Egypt at the UN General Assembly vote.

Amid this mounting pressure, Egypt formed an operations room to coordinate its management of the crisis. Government sources told Mada Masr earlier this week that Egypt has grown increasingly worried that the ratcheting up of isolationary measures by the West may harm its bilateral relations with Russia, which includes military and energy cooperation, as well as significant two-way trade in food commodities.

An Egyptian government source, speaking briefly after the vote, told Mada Masr that Cairo provided a full explanation to “Russian friends” about the reasons for its vote, linking Egypt’s position to what they said were “disturbing developments in the humanitarian crisis.” Though Cairo added that they “did not overlook the reasons for Russia’s concerns,” the source added.

According to a source in the Arab League, the countries will use a meeting of the league’s foreign ministers scheduled for this week to explain their position and will also call for a quick solution to the humanitarian crisis and stresses the importance of taking into account the causes of the political crisis.

Among the 35 countries that abstained from the General Assembly vote were a large number of states in West Africa and the Sahel region where Russia and France have been vying for influence and where forces from Russia’s Wagner Group have also been deployed. These countries included Senegal, the current president of the African Union, and Mali, which recently witnessed large demonstrations against France amid the withdrawal of French forces under a 2014 UN mandate.

A sweeping wave of economic sanctions by the European Union and the US targeting Russia has plummeted the ruble to record lows and sent Moscow’s stock exchange into a free fall.

Envoys from Ukraine and Russia are expected to meet on Thursday in Belarus for a second round of talks aimed at ending the fighting. However, Russian forces continued their offensive on Wednesday, bombarding Kharkiv, Ukraine’s second-largest city and moving a large military convoy closer to the capital, Kyiv. A week into the fighting, more than 870,000 people have fled Ukraine, according to the United Nations.