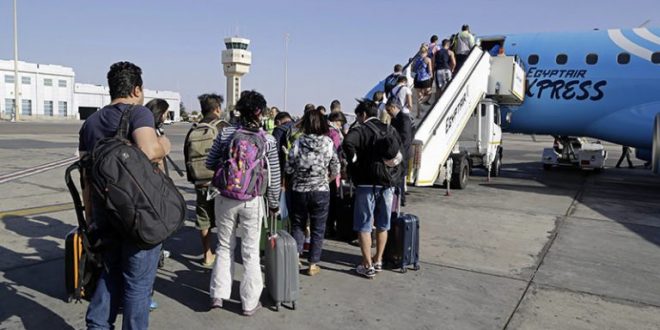 Egyptian authorities are refusing Eritrean refugees asylum and deported 24 of them last month after holding them in appalling conditions, according to a Human Rights Watch (HRW) report released on Thursday.

The 24 December deportations follow 15 other Eritreans who complained of being “tortured” and “held in extremely punitive conditions” after being deported from Egypt in October and November.

“Egypt should stop forcing Eritreans to return to a country where they face serious risks of arbitrary detention and torture and allow them full access to asylum procedures,” said Joe Stork, HRW’s deputy Middle East and North Africa director.

“The Egyptian authorities should also immediately halt the immigration detention of children.”

In November 2021, Egypt hosted a little over 20,000 Eritrean asylum seekers and refugees, according to UNHCR, the UN refugee agency.

But the number of undocumented Eritreans is probably much higher, as the 24 people deported in December were not registered with UNHCR.

The deportation of asylum seekers without giving them the right apply for refuge is against international law, which protects the right of people coming from a country where their safety is at risk to try and claim asylum.

HRW documented the detention of nine Eritrean asylum seekers – three women, two men, two unaccompanied minors and two unaccompanied children of ages three and seven – five of whom were among the 24 people deported in late December. The others are still in detention, according to HRW.

None of the nine Eritreans were allowed to access the official asylum procedures and authorities attempted to deport them by tricking them into signing “voluntary” return agreements.

Authorities arrested the nine asylum seekers between May and October 2021 on their way to Cairo, where they wanted to register with UNHCR.

A cousin of one of the detained children, who has dental problems, told HRW that “the police station allows half of [the child’s medications] only and confiscates the other half for no reason”.

The detainees weren’t told whether they had been charged with a criminal offence and did not update their families on their current state.

Seven of the nine asylum seekers monitored by HRW fled Eritrea because of mandatory military service.

According to the Refugees’ Platform, an Egyptian organisation supporting migrants and asylum seekers, dozens of Eritreans are detained in Aswan, a city in the south of Egypt and a main entry point for asylum seekers entering the country from Sudan.

Based on interviews with Eritrean community leaders, HRW has noticed an increase in arrests of Eritrean asylum seekers at the border since the initial arrest of the 24 deported at the end of December. The Refugees’ Platform said it documented over 50 cases of detention in 2021.

An international aid worker interviewed by HRW said that as of 14 December, there were 44 Eritrean children detained in Aswan.

President Abdel Fattah el-Sisi said on 11 January that Egypt has been welcoming to six million refugees fleeing insecurity in their home countries, adding that authorities haven’t prevented them from entering or forced them into camps.

Egypt is signatory to three international and regional conventions which prohibit the removal of asylum seekers without being given the opportunity to claim asylum, but also torture and degrading treatment.

Asylum seekers should not be detained on their immigration status, this being especially the case for children.

“By arbitrarily detaining people in need of protection and preventing them from seeking asylum, the Egyptian government is violating its international legal obligations,” said HRW’s Stork in a statement.

“Egypt should protect asylum seekers rather than forcibly deporting them to risk of grave harm.”