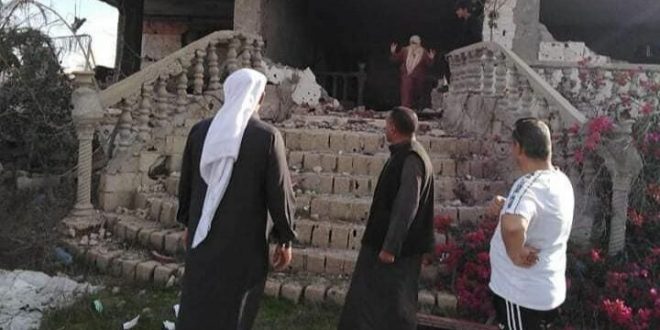 Displaced for 7 years due to fighting, North Sinai residents return home to rubble

Residents of eastern North Sinai returned to the area at the beginning of this week to inspect homes they were displaced from seven years ago and found their houses and farms reduced to rubble, some of the returnees told Mada Masr.

Now, they await news from the government which has promised compensation for damages and to redevelop the area ravaged by years of fighting.

Residents of the villages of Kharuba, Gharaa, Shallaq and Qabr Umayr were forced to move away from Sheikh Zuwayed amid the state’s campaign against militants in the peninsula, but were permitted to return this week with the permission and under the supervision of the Armed Forces.

Before the return was announced officially, tribal leaders began to inform members of their tribes from the area that they would be allowed to return and collected the identification cards of those who wished to do so to coordinate entry dates with the military.

The displaced residents raised the Egyptian flag from electricity poles affixed to severed cables and performed prayers in the remains of mosques. Some set up temporary shelters next to buildings razed to the ground and used wood gathered from now-barren farms to light fires, make tea and bake bread, before all left the area again at dusk, retrieving their cards from a checkpoint at the outskirts of Kharuba on the way.

Scrap dealers also entered alongside the returnees and took everything that could be sold, including iron extracted from the rubble of houses, copper from dilapidated electric transformers, and even the damaged water pumps in the wells, according to some of the returnees, who spoke to Mada Masr on condition of anonymity.

Members of the Sawarka tribe discussed their return for around a month in advance with a Sawarka leader, who told them to gather at the sports hall in the governorate’s capital, Arish, on January 16, a member of the tribe told Mada Masr. But the source believes the gathering was merely a photo op for social media.

Tribal leaders known for their ties to the security services posted images on social media this week showing the returnees in front of banners of President Abdel Fattah al-Sisi, or bearing slogans thanking him and the Armed Forces for allowing the people to return to their lands.

The Sawarka member told Mada Masr that when they returned there was “no house. The trees are all dry, either uprooted or burned. Even the water pumps were stolen.”

Another returnee told Mada Masr that they toured about eight kilometers within Kharouba and the surrounding areas of Aradat, Kuza and Hawaniya, all the way to Karam al-Qawadis.

The farmland had been rendered non-arable and most of the village was completely destroyed, with the exception of its center, Amayer al-Kharouba, some of which is still habitable, said the returnee, adding that it likely escaped destruction since it is close to the main Armed Forces outpost in the village.

Residents are waiting for the government to assess the damages and determine what will be paid in compensation for the homes and farms that residents hope they will be able to repair in order to start their lives over in the villages.

Yet, some fear that the villages will not be rehabilitated sufficiently, as is the case in the villages of Abul Arag and Dahir to Sheikh Zuweyed’s south, where people have been allowed to return since the end of 2021.

While the governor visited the villages south of Sheikh Zuwayed over a month ago, promising to install transformers, repair electricity networks and connect water, nothing has been done on the ground so far.

A few days before the return event this week, the North Sinai governorate announced that a committee would be formed to discuss the villages’ needs. The committee was to include representatives from the local directorates of the education, health and electricity ministries, along with representatives from water companies and Telecom Egypt.

After inspecting the villages, North Sinai Governor Mohamed Abdel Fadil Shousha met with the committee and asked them to resume work in government agencies, link buildings to electricity, and provide fresh water trucks.

On Monday, Shousha announced in a televised interview that the state has spent around LE4 billion in compensation on homes and farms for former residents of the eastern regions of Rafah and Sheikh Zuwayed. The governor said he was sure the value of the compensation wasn’t sufficient and said that the state would work in the coming period on building residential units and Bedouin homes in the vacant villages to house the returnees.