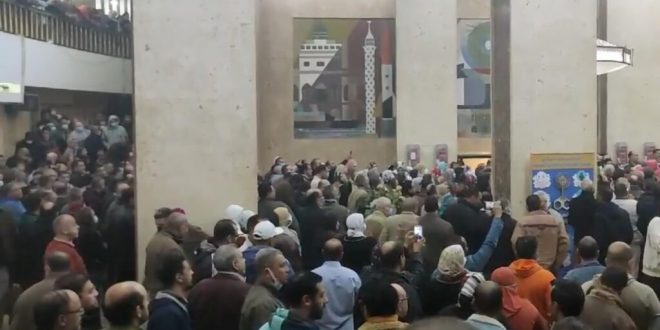 Thousands of state media workers joined a third consecutive day of demonstrations on Tuesday at the Maspero building, the headquarters of the Egyptian Radio and Television Union, to protest working conditions, low wages and years of overdue bonus payments.

Employees who spoke to Mada Masr on condition of anonymity said the workers were first angered when National Broadcasting Authority chair Hussein Zein introduced a new full-time, fixed working schedule that they say will impact their ability to take on second jobs.

For years, employees said, workers for the union have had to take on extra jobs to supplement wages that are often extremely low, and have relied on the flexible shifts at Maspero to allow them to do so.

Crowds of workers who have gathered in the afternoon on three consecutive days are now demanding that Zein step down from his position, and that years of overdue payments be released if they are to agree to the fixed-hours schedule.

“The old working hours meant we didn’t need to come to work for more than two days a week, for two or three hours depending on the tasks at hand, and it has been in place ever since we joined Maspero,” Salma* one of the demonstrators, told Mada Masr on Monday.

“Zein’s recent decision to set working hours at seven hours a day, five days a week are the reason for all this anger erupting now. How can we afford to cover costs for ourselves and our families with just the crumbs we get from Maspero and without working additional jobs?”

Salma said she thought the decision was intended to push as large a number of union workers as possible to quit, noting that people began to resign or take unpaid leave in September, when they first received unofficial verbal instructions to the same effect as the recent decision.

Workers were told on Tuesday that negotiations to secure funds for their payments are ongoing between Zein and Finance Ministry officials, according to a protester who spoke to Mada Masr on condition of anonymity. A Monday statement from the authority also said that it was negotiating with the Finance Ministry and other state institutions to secure funds for the payouts.

Yet, senior management also appear to be considering ways to negotiate with workers to drop their demands, according to a source who attended a Tuesday meeting of the union’s department heads and who said that television department chair Naila Farouk told the meeting’s attendees that senior management is willing to withdraw the newly introduced biometric system to monitor employee attendance if protesting workers drop some of their financial demands.

On Sunday, downtown Cairo’s Maspero building became overcrowded at 2 pm, the new end-of-shift time, when employees spontaneously erupted into a demonstration against the decision, Salma said.

The National Broadcasting Authority issued a statement on Sunday saying that the workers were only concentrated at the exit during a trial run of the new biometric device for tracking attendance, without mentioning the demonstration.

“[Monday]’s demonstration started around 2 pm and was not as spontaneous as [Sunday]’s demonstration. A number of workers called for it by word of mouth, via text messages and phone calls, starting at 1 pm, and the rest of the workers quickly responded to the call due to their anger,” Salma said.

An increased number of security personnel were posted outside the Maspero building on Monday, another eyewitness told Mada Masr on condition of anonymity, adding that a member of the security personnel in civilian clothes attempted to arrest one of the demonstrators leading the chants but was prevented from doing so by other demonstrators.

Turnout for Tuesday’s demonstrations outside the Maspero building grew to the thousands, with colleagues from the second shift joining those who finish at 2 pm, as well as workers from other sectors of the union that are not located in Maspero.

Demonstrators arriving early on Tuesday found the main lobby of the building covered in large quantities of soapy water, in what they described as an attempt by the building administrators to prevent the demonstration from happening, leading them to chant, “we’re not leaving, not for water nor mud.”

In an attempt to calm the demonstrators, MP Doria Sharaf Eddin, the chair of the Information and Culture Committee in the House of Representatives, also attended the protests on Monday.

However, the first demonstrator said that they rejected her attempt to intervene and expelled her from the building, explaining that Maspero staff are resentful of Sharaf Eddin, whose tenure as information minister from 2013 to 2014 saw a deterioration of their living conditions.

Khaled*, another participant in the demonstrations, said that economic conditions for union workers began to deteriorate after the January revolution, beginning with the reduction in value of the part of employees’ wages based on how many times they participate in TV programs. The union then stopped paying yearly bonuses in 2014, the same year in which Sharaf Eddin decided that workers would no longer receive Eid bonuses, Khaled explained.

Another worker who has spent the past 30 years in the union’s administrative department said that they earn even less. Abdel Aziz*, who has also attended the demonstrations, told Mada Masr, “my total wage does not exceed LE3,700 ($235), after 30 years of service.”

Retirement bonuses are also overdue. A former employee at Maspero who retired in 2019 told Mada Masr on condition of anonymity that they had not received end-of-service benefits, which should be worth the equivalent of 150 months of basic wage, and that no official reason had been given for withholding the due payment.