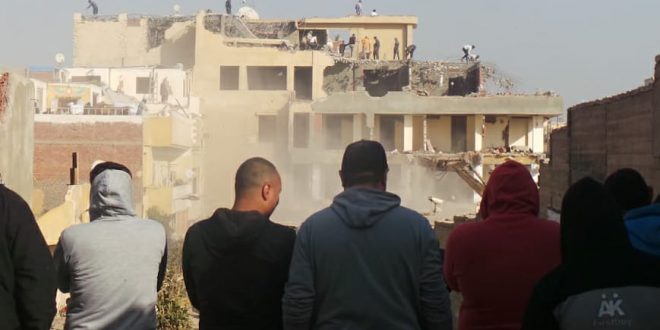 Forty-one residents of Nazlet al-Semman, a neighborhood adjacent to the Giza pyramids complex, are trying to take the government to court for ordering the expropriation of their houses, lawyer Mohamed Abu Saleeb told Mada Masr.

The residents filed a lawsuit on Sunday before the State Council against the expropriation decision that came out in mid-December, which some locals believe has been long developed by officials who conceived and implemented the plans without consulting local residents.

Nazlet al-Semman was identified as a key site for development as early as 2008. Since then, the government has barred new building licenses in the area, while residents have faced demolitions and evictions and have been denied access to utilities since 2019, all without being included in consultations toward plans that will see as many as 4,800 of its families relocated, according to an official who spoke previously to Mada Masr.

Plans to transform Nazlet al-Semman into a tourist attraction only crystallized in the public domain in early 2021, when the government’s intention to move out the majority of the neighborhood’s residents in order to transform the area into “an open-air museum” made their way into the press.

A cursory public consultation was later held with a fraction of the neighborhood’s residents in mid-December this year. Attendees were not warned about the upcoming decision, which was to stipulate the seizure of the whole area as part of a project to develop tourist attractions and facilities around the new US$795 million Grand Egyptian Museum.

The residents of Nazlet al-Semman, the majority of whom are tourism workers with family ties connecting them to this part of Giza, aim to overturn the seizure decision in their new lawsuit against the prime minister, the housing minister, the head of the New Urban Communities Authority and the neighborhood chief of Haram.

One resident, Omar*, told Mada Masr that a tourist project could be developed in the area without evicting locals.

Saad*, a resident of the area who has joined the new lawsuit, likewise said that many of the residents reject eviction for the sake of development plans that were decided “without community dialogue.” He said officials were insincere in their attempts to come to a solution with the area’s residents, and have continually failed to consider their requests.

Ten residents met with the governor of Giza, Major General Ahmed Rashed, on December 15, at his request, when the seizure decision was made but not yet announced, Saad told Mada Masr. Rashed did not inform them of the new decision, only saying that he would discuss their requests “with the people above” and assuring them that compensation for their property would be awarded in a timely fashion. “He did it just for show,” Saad said.

The new lawsuit demands an urgent halt to the prime minister’s decision, to stop the evacuations and removals until the case is settled, and to eventually cancel it, said Abu Saleeb. Abu Saleeb also noted several errors in the published decision: some of the houses listed for seizure are described as having a smaller area than they do in actuality, while ownership is incorrectly attributed in other cases and the majority of the owners are not named at all.

“As soon as they [the residents] learned of the last decision, I received dozens of calls from the families asking to join the lawsuits against it,” said the lawyer. More than a thousand residents of Nazlet al-Semman currently plan to join either the new lawsuit or an earlier one that was begun by residents whose homes were demolished in August.

Nazlet al-Semman was identified as a development area in the Cairo 2050 strategy, which was conceived under the government of ousted former President Hosni Mubarak, and also involved various development projects in Maspero, and the Nile islands.

Demolitions were carried out without warning in Nazlet al-Semman in 2019 and in August this year, and justified as targeting the removal of informal, “unsafe” and unlicensed houses, with residents arrested for resisting the unexpected raids in both times. The August eviction campaign targeted the Sin al-Agouz neighborhood, where some residents returned home from work only to find their homes destroyed without warning, and were later informed that they would be relocated to new housing units in the October Gardens area.

Some residents began legal action against the August actions, filing a suit with the State Council to protest the fact that officials neglected to warn them that their houses would be demolished. They are now trying to alter their lawsuit to argue that those demolitions were also based on the seizure decision that would come out four months after, said Abu Saleeb.