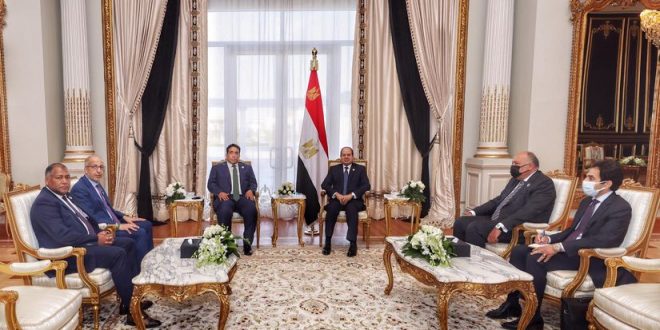 Egyptian President Abdel Fattah El-Sisi reaffirmed the need for an end to all foreign interference in Libya, the preservation of its territorial integrity, and the restoration of its security and stability.

During his meeting with Mohamed Menfi, president of the Libyan Presidential Council, in Egypt’s new administrative capital, El-Sisi reiterated Cairo’s full support for a political solution to the Libyan crisis.

During the meeting, he reviewed his recent participation in the Paris International Conference for Libya, and stressed the need to hold national elections on time next month.

Menfi expressed his appreciation for Egypt’s attempts to restore peace and stability in Libya in light of the close ties between the two countries.

He indicated his keenness to continue intensive consultations with Egypt in order to hold elections on time.

International Relations and Cooperation
All
2021-11-24
asaeid
Previous Rights watchdog demands probe into France’s role in airstrikes on civilians in Egypt
Next Decision to remove lawyers from syndicate rolls for inclusion on terrorism list could set precedent, lawyers say