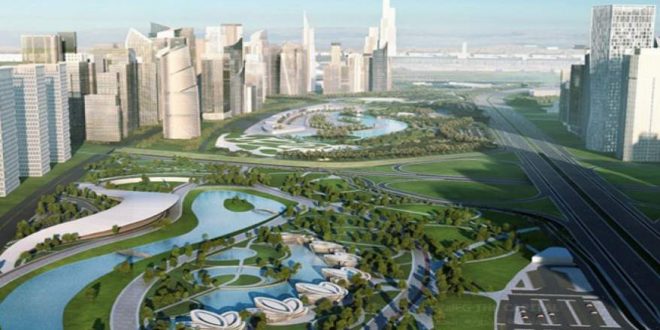 President Abdel Fattah al-Sisi has directed the government to start relocating to the new administrative capital in December.

The new administrative capital, east of Cairo, is located in the area between Cairo-Suez Road and Cairo-Ain Sokhna Road. The site is about 60 km from both the cities of Suez and Ain Sokhna, and the heart of Cairo.

In the wake of his statements, Deputy Minister of Housing for National Projects Khaled Abbas told journalist Ahmed Moussa on the Sada Al-Balad channel on Nov. 3 that the transfer of employees to the administrative capital will take place over six months starting in December.

Abbas said that 50,000 employees will move, starting with 10 percent in December, with about 200 to 300 employees from each ministry. He stressed that all services would be available and that the new buildings have been completed.

According to the government, the new administrative capital has a total cost of $60 billion, a total area of ​​170,000 acres, and a population of 6.5 million people, in a step aimed at easing congestion in Cairo. The first phase, covering ​​40,000 acres, includes the government district, the business district, and the diplomatic district.

Pro-regime media outlets rushed to celebrate the start of work in the new capital. Journalist Akram al-Qassas, chairman and editor-in-chief of Youm7 newspaper, said Nov. 4 that the new administrative capital symbolizes the new republic. He said that the relocation reflects the importance and effectiveness of the steps taken by the state agencies.

On Nov. 3, Nashaat al-Daihi, host of the Bil-Warqa wa Al-Qalam program, said that the new capital should serve as a “national shrine” and an embodiment of dreams, ambitions, achievements, and creativity.

However, despite the unprecedented praise from Egyptian media outlets and satellite channels that are using the slogan “#The_New_Republic” during all broadcasts, observers believe that the relocation faces some obstacles that the government has yet to overcome.

On July 11, Khaled al-Husseini, the official spokesman for the Administrative Capital Company, said that the construction work of 50 embassies in the diplomatic district is scheduled to be completed in mid-2022.

But on Oct. 13, a diplomatic source told Al-Araby Al-Jadeed newspaper that the Ministry of Foreign Affairs contacted the countries whose embassies are based in Cairo to ask them to confirm their relocation and pay between 20 and 25 percent of the total price of the property they would be receiving.

According to the source, however, the Ministry of Foreign Affairs failed to sign contracts with more than ten countries, while only 40 countries agreed to submit requests to relocate their embassies to the administrative capital, and only five embassies are actually relocating.

The source said that some major countries find it futile to relocate from Cairo and pay exorbitant prices and that some embassies question the capital’s viability in light of the difficulty of convincing citizens to reside there and the expected daily travel back and forth.

During the launch of the project in 2015, the Ministry of Transport announced its intention to build a monorail and express electric train, among other internal projects such as environmentally friendly buses, in order to facilitate employees’ and citizens’ commute to work. On Nov. 3, the Administrative Capital Company announced the installation of the first monorail with four cars and set an official date for the relocation.

Diaa el-Din Daoud, a member of the Parliament’s Legislative Committee, told Al-Monitor that turning the administrative capital into the capital of Egypt is unconstitutional, especially the relocation of state agencies, such as the parliament and the Constitutional Court.

The solution, Daoud said, is to expand the geographical scope of the Cairo governorate by a cabinet decision to be submitted to the House of Representatives. Such a move is necessary and possible given the government’s vision of a new capital and its harnessing of all possibilities for the success of the project.

On March 9, Sisi said during his speech at the activities of the 33rd educational symposium on the Day of the Martyr and the Old Warrior that the new administrative capital represents the birth of a new state and a new republic.

“We are seeking to improve the reality of Egyptians,” he said.