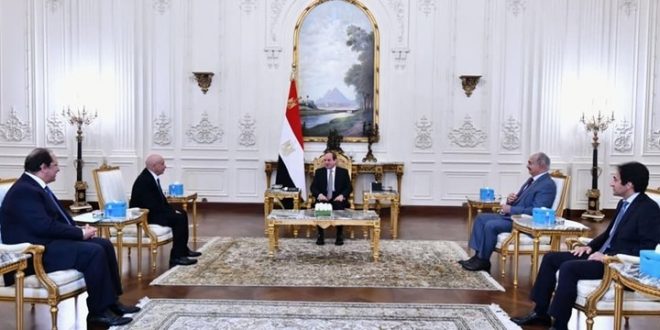 Egyptian President Abdel Fattah el-Sisi hosted Libya’s eastern commander Khalifa Haftar and parliament speaker Aguila Saleh in Cairo on Tuesday, and stressed the need to hold national elections on time in December, according to a statement by the Egyptian presidency.

“Egypt will continue to coordinate its efforts with all our Libyan brothers to help ensure the unity and cohesion of the Libyan public institutions to ensure the success of the parliamentary and presidential elections,” Sisi was quoted as saying.

Haftar, backed by Egypt and the United Arab Emirates, controls most of the eastern part of the country, and between April 2019 and June 2020, his Libyan National Army (LNA) staged a brutal assault on Tripoli in an attempt to seize the capital from the UN-recognised government.

The offensive faltered amid fierce resistance from the government and its allies, including Turkey.

UN-sponsored peace talks brought about a ceasefire last October and installed an interim government that is expected to lead the country into December’s elections.

The elections have faced setbacks in recent months as delegates for the Forum for Libya’s Political Dialogue (LPDF) were recently unable to agree on the legal framework needed to organise the vote.

Although Haftar has not declared his candidency, he is expected to run in the vote and has hired Washington DC based lobbyists to boast his democratic credentials.

During Tuesday’s meeting, Sisi reiterated his call for all foreign forces to leave the country.

According to the UN, there are more than 20,000 foreign fighters in the country and their presence is seen as a major obstacle to staging the elections.

In an interview with Reuters in July, Prime Minister Abdulhamid Dbeibah said it would be “very difficult” to unify the country’s military, but there was an ongoing dialogue with Haftar.

“Of course, communicating with Haftar, he is a difficult military person, but we communicate with him. But things are not easy,” Dbeibah said.