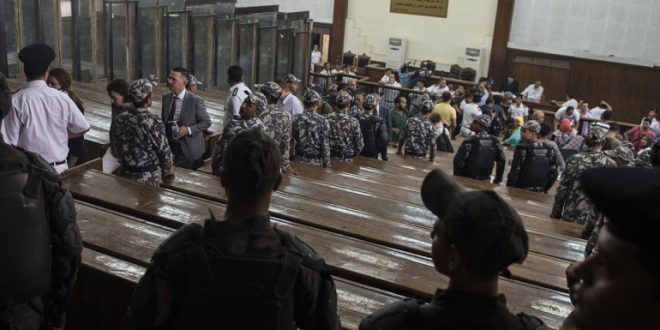 Ten local and international rights groups have expressed their “full solidarity” with members of an Egyptian organisation ahead of a Saturday court hearing.

Egyptian authorities accused 31 Egyptian Commission for Rights and Freedoms (ECRF) members – 14 of them already in custody – of being affiliated to the Muslim Brotherhood, legally designated a terrorist group in Egypt. They are also accused of misusing social media tools and disseminating false news.

They will appear before an emergency state security criminal court over what the joint rights groups’ Thursday statement described as “charges relating…to their peaceful work in defence of victims of torture, arbitrary detention and forced disappearances.”

The groups also condemned the ongoing state of emergency imposed by the government since 2017 in violation of the constitution and how it is being misused to refer civilians to emergency state courts.

“These exceptional courts fall far short of minimum fair trial guarantees as their verdicts are not subject to appeal but instead require the final approval of the President of the Republic, who might abolish or reduce the sentence or order a retrial, in clear violation of judicial independence,” according to the statement.

Group director Ezzat Ghoneim was arrested on similar charges back in 2018. A decision was issued later for his release on probation, but it was dismissed by the authorities.

Ghoneim’s arrest was followed by the detention of other members. Some have suffered difficult conditions in detention, according to the Committee for Justice, a Geneva-based human rights group.

“The ECRF detainees… were subjected to many violations, including solitary confinement for 23 hours a day…only allowed out of their cells for approximately 30 minutes twice a day…to use the toilet and shower,” the CIJ said in December 2020.

The detainees were also deprived of visits, while some who suffer from “rare diseases” were not allowed to take medicine needed to manage their illnesses.