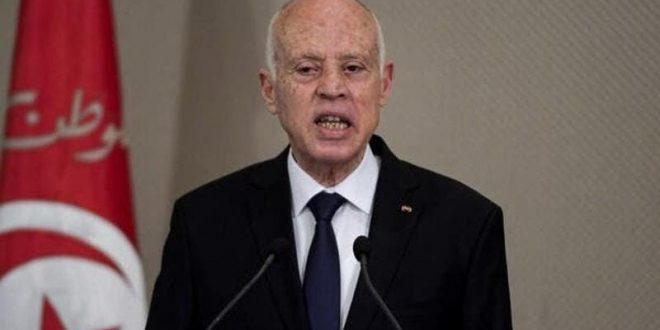 After Egyptian President Abdel Fattah al-Sisi met with Algerian Minister of Foreign Affairs Ramtane Lamamra in Cairo, the Egyptian presidency said in an Aug. 1 statement that the two officials “agreed to fully support the Tunisian president and everything that would maintain stability in Tunisia and make the will and choices of the Tunisian people come true, so as to preserve their capabilities and security of their country.”

“We affirm Egypt’s full support for stability in Tunisia and the measures taken by President Saied to bring about stability, security and the will of the Tunisian people,” Shoukry said Aug. 3 after meeting with Saied in Tunisia in a video posted by the Tunisian presidency on Facebook.

Shoukry said that Tunisia is going through a historic moment led by Saied, who attaches the utmost importance to the values ​​of democracy, and Tunisia’s constitution and institutions.

On July 24, Saied fired Prime Minister Hisham Mechichi, suspended the parliament and seized the executive power in a move that his Islamist opponents consider a coup. Saied’s actions seem to have popular support.

Saied’s moves, which he insists are constitutional, came following sweeping protests across Tunisia and violent clashes between protesters and security forces. The protesters have demanded the resignation of the government and the dissolution of parliament amid growing anger against the regime over the spread of COVID-19 and economic and political deterioration.

Tunisian’s political crisis has cast a shadow on the future of the democratic system in the country.

The Tunisian revolution of 2011 is often considered the only success of the Arab Spring revolutions across the region. But even there it has not led to economic or political stability. A decade later, many residents have said that they have not seen any improvements in their living conditions and feel frustrated by Tunisia’s prolonged political stalemate and elite infighting.

Many Egyptian media outlets described the Tunisian president’s measures as part of the battle against the Muslim Brotherhood group, a reference to Ennahda, which is viewed as the Brotherhood’s arm in Tunisia.

Alessia Melcangi, a professor at the Sapienza University of Rome and nonresident senior fellow at the Atlantic Council’s Middle East programs, told Al-Monitor that Egypt has vested interests in supporting another Arab state where the role of the president has taken on expanded power over other state institutions. Cairo may welcome a strong presidential system with little room for opposition, she added.

Melcangi said, “But this is only one side of the coin. There is in fact another fundamental common element: the shared hostility against Islamist organizations such as the Muslim Brotherhood in Egypt and Ennahda in Tunisia, both of which have historically played a fundamental role in both countries.”

Commenting on Cairo’s motives in supporting Saied, Melcangi said that building a sort of Arab alliance that is “strongly adverse to political Islam could help Egypt to enforce its position in the Middle East” as well as support its geopolitical and geoeconomic projects in the Mediterranean.

Saied visited Egypt and met with Sisi in April. As defense minister, Sisi overthrew the Muslim Brotherhood regime led by Mohammed Morsi, following mass demonstrations in 2012-2013. Morsi’s ouster came one year after the group came to power as a result of the first elections that followed the January 25 Revolution in 2011.

Since then, Sisi, who is viewed as very hostile to political Islam, has led a crackdown on the opposition, particularly the Brotherhood leaders.

Egypt has called the Brotherhood a terrorist organization since late 2013, banned its activities and confiscated its assets as well as those of a number of its members. Egypt blames the Brotherhood for many armed attacks against the military, the police and civilians in Egypt.

“Cairo is genuinely happy because Tunisia — although it is small in terms of GDP and military — matters in terms of the image and politics of all North Africa,” Jalel Harchaoui, a senior fellow at the Geneva-based Global Initiative against Transnational Organized Crime, told Al-Monitor. Harchaoui went on, “What has happened in Tunisia is a rhetorical, ideological and narrative triumph for Cairo.”

Melcangi said that Saied had been able to highlight the fragilities of Ennahda and marginalize its leader Ghannouchi, riding the anger of Tunisians against the corruption of the party system and against the ineffective economic and political program of Ennahda, in power since 2011.

She added that the marginalization of the main Tunisian political Islamist party is an indirect achievement for Sisi, who has always stressed the inability of the Muslim Brotherhood to realize the revolutionary ideals of the Arab Spring and offer a credible response to the people’s needs.

From the Egyptian perspective, the decline of Ennahda is another failure for the Muslim Botherhood’s regional agenda in the Arab world. Therefore, it is extremely likely that Sisi will support Saied’s future moves, Melcangi said.

Commenting on Cairo’s political gains from what is happening in Tunisia, Melcangi said, “Despite the different interests and threats, Egypt and Tunisia will probably agree on a common policy vis-a-vis the Libyan domestic political process, trying to marginalize the Libyan Muslim Brotherhood wing.”

She went on, “A possible future structural entente between the two countries might also create geopolitical convergences on specific topics, such as the Libyan file and the question of the Grand Ethiopian Renaissance Dam, although Tunisia has a relative geopolitical grip in the region.”

In the UN Security Council corridors in July, Tunisia expressed support for the positions of Egypt and Sudan in the dispute over the dam Addis Ababa built on the Blue Nile, the main tributary of the Nile River, amid fear for the two countries’ shares of the Nile water.

Tunisia submitted a draft resolution calling on Addis Ababa to stop filling the dam’s reservoir and to resume tripartite negotiations on binding agreement on the filling and operation of the dam. The Security Council has not made any recommendations regarding the Tunisian proposal.

However Harchaoui downplayed Tunisia’s ability to support Egypt. “Tunisia is too small and too weak to have any noticeable effect on Libya or Ethiopia. Of course, Tunis will likely be more supportive in forums like the UN and the African Union, but that aspect is not a game-changer.”