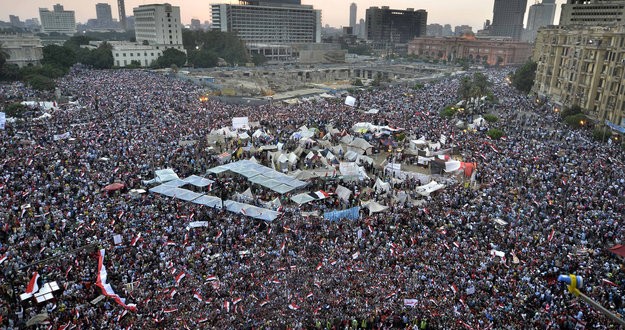 Generation Tahrir: The catharsis of narrating a broken dream

A particular form of political activism was born during the Arab uprisings that believed in the power of mass protest movements to create political change. So entrenched had the ruling sclerotic holdovers from the decolonisation age become that they could not imagine the peasants had it in them to revolt – nor could their long roster of external backers.

There has been much debate over the motivations behind the uprisings that began in Tunisia, then quickly spread to Egypt, Bahrain, Libya, Yemen, and Syria. Was there American encouragement for democracy activists in the years preceding, or Arab media propagation to revolt after former President Zine El Abidine Ben Ali fled Tunisia? None of these theories fits the phenomenon across the board.

Western governments were clearly blindsided by the events in Egypt, Tunisia, and Bahrain. Western powers pushed former President Hosni Mubarak to resign in Egypt only in the face of the persistence of street activists. Pro-uprising Arab media played down events in Bahrain for sectarian reasons.

Driving the movement there was an unprecedented wave of mobilisations, which stemmed first and foremost from popular sentiment and agency. Fear of the power of the masses has haunted ruling elites the world over since the French Revolution.

Modern political systems, whatever their colour, are designed to mitigate the dangers stemming from popular movements, and to ensure elections are won by the right people who won’t subject the existing order to radical change, from sectarian Lebanon to the US electoral college. French sociologist Gustave Le Bon called it the psychology of crowds, a classist theory of ordinary people as an unthinking mob whose real intent is simply to maintain the status quo.

In the Middle East, regimes have sometimes been able to harness mass mobilisation to great effect – former Egyptian President Gamal Abdel Nasser’s mastery of popular politics was legendary – but the Arab Spring was the mother of all meltdowns in systems of control.

Governments with global reputations for their skills in the art of repression – with full political and technological support from the West – were quickly overwhelmed. What collapsed, too, was the Orientalist trope of Arabs who expect to be ruled with an iron fist and, to quote a recent Foreign Policy headline, never really wanted democracy anyway.

The lesson of the uprisings, however, is not that the people can revolt after all. It is that they need to know with what purpose, to answer the question: what next? In Syria, a range of regional and international players transformed a popular revolt into an ugly proxy war that fuelled the rise and fall of the Islamic State and the predictable survival of the regime, which found its own external backers. Syrian protesters were only briefly sovereign over their own uprising.

In Libya, a similar pattern of western and Gulf intervention took out former leader Muammar Gaddafi, but was incapable of establishing a stable new order.

The consequences of lack of direction and leadership are most painfully demonstrated in the Egyptian example. The military manipulated popular belief in it as a good-faith actor, despite early examples to the contrary, such as the abuse of women at the Egyptian Museum, then played nice with the Islamist movement while crushing the leftist and apolitical youth groups who called themselves simply – and perhaps naively – “the revolutionaries”.

Successful revolutions identify the centres of reactionary power and go after them relentlessly. Failure to heed this principle has put at risk the gains made in Tunisia, often cited as the one success story of the Arab Spring. In the post-Ben Ali order, various interests – business, landed, security, foreign – were able to maintain their centres of power, leading to the clash over prerogatives among president, government, and parliament that Kais Saied is currently winning.

Caught off guard once, it has become more difficult than ever for popular action to topple governments. Middle East states have become some of the most surveilled territories in the world, as regimes criminalise all forms of dissent online or on the streets. Israeli technology perfected in oppressing Palestinians has been deployed to sinister effect against domestic dissidents, with the UAE and Saudi Arabia acquiring phone-hacking technology from the Israeli NSO Group.

With the ancien regime locked in place, Israel can continue to deprive Palestinians under military occupation and blockade of the basic civic rights of statehood, work, and freedom of movement, to international approval.

For now, both western geopolitical interests in the region and the power play among Gulf leaderships with enormous financial resources to dispense on games without frontiers put in question the possibility of any change from below. Any popular movements that survive the first stage of domestic repression will then face the second hurdle of working out what the West and the Gulf think of them. US imperial decline, China’s rising regional interest, and the waning petrodollar power of the Gulf – all longterm trends that could influence the success of domestic mobilisation – could take many years before having an impact.

In this situation, the diasporas will only grow. There are more than 3.5 million Syrian refugees in Turkey, a million in Lebanon, and more than half a million in Jordan. But there are also unknown numbers of Egyptians, Bahrainis, Saudis, Yemenis, and Libyans, who have taken up residence in Europe and North America because of the political violence and repression associated with the uprisings and their aftermath.

Events such as the Tahrir protests become a sacred memory, the place where “the generation that decided to revolt” can focus their thoughts through the catharsis of narrating a broken dream. Every uprising had its Tahrir – but times change, and so has Tahrir. Not only physically: the most significant strike the government could make against its symbolic value was to create the new capital outside Cairo. Downtown Cairo is no longer invested with the political and economic prestige it had a decade ago. Whatever social struggle there is to come will bear a different name and address.