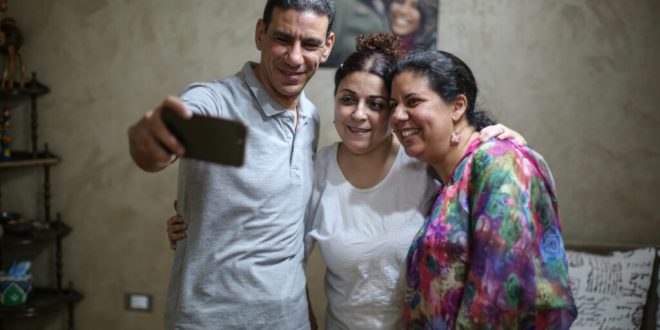 Over the last 24 hours, Egyptian authorities have released six high-profile political prisoners who were being held in remand detention, some of them for over two years.

Most of those freed were arrested in the fall of 2019, amid the largest arrest sweep of President Abdel Fattah al-Sisi’s time in office following small-scale protests against his rule.

Rights lawyer Mahienour al-Massry, as well as journalists Mostafa al-Asar and Moataz Wadnan, returned to their homes on Sunday afternoon, according to Mohamed Anwar al-Sadat, head of the Reform and Development Party and of the International Dialogue Group, a body which lobbies for the release of political prisoners.

Activist and journalist Esraa Abdel Fattah, journalist Gamal al-Gammal and Abdel Nasser Ismail, the deputy head of the Socialist People’s Alliance Party, were also released and returned to their homes on Saturday.

All six former detainees walked free from the National Security Agency headquarters in Abbasseya, lawyer Ahmed Ragheb told Mada Masr, adding that this eased procedures because there was no need for security services to return them to their respective local police departments to process their release.

Sadat told Mada Masr that Saturday and Sunday’s releases are the result of an ongoing “consultation mechanism with the Public Prosecutor’s office,” hoping that more releases follow. Sadat has said previously that the International Dialogue Group, a body comprising members of both parliamentary chambers, approaches the head of the Senate, security departments within the Interior Ministry, and the Public Prosecutor’s office to request they review cases of detainees held in remand, or of convicted and sentenced detainees who are eligible for pardon or release. The group also lobbies for easing travel restrictions that courts can place on defendants during investigations.

Lawyer and member of the National Council for Human Rights, Nasser Amin, who was representing Gammal, also hoped that more high-profile detainees held in remand detention would soon be released, telling Mada Masr that the step could signal an end to the widespread use of remand detention to incarcerate people for their political views.

Journalist Moataz Wadnan was arrested in February 2018 shortly after holding an interview with former head of the Central Auditing Organization, Hisham Genena, following Genena’s claim that administrative corruption had caused losses in excess of LE600 billion in 2015. Asar, a journalist with the privately owned Al-Shorouk newspaper, was also imprisoned in February 2018 facing charges of “joining a group established in violation of the law” and “spreading false news.”

Massry was arrested in September 2019 from outside the State Security Prosecution headquarters as she was trying to represent detainees arrested in a sweeping security campaign that saw thousands of people held in remand after a small but widespread outbreak of anti-government protests. Massry was held on terrorism and false news charges, similar to those cited when Abdel Nasser Ismail of the Popular Alliance Party was arrested in the same month.

Abdel Fattah, meanwhile, was arrested in October 2019 from her car by plainclothes security forces who blindfolded and bound her, then took her to an unknown location where she was beaten on her back, arms and face for hours to force her to unlock her phone. She was transported in a car to another unknown location, where she was beaten again and strangled several times using the sleeves of the jacket she was wearing until she lost consciousness. She was ordered held in remand on charges of joining a terrorist organization, spreading false news and statements and misusing social media.

Earlier this year, Abdel Fattah, Massry and journalist Solafa Magdy, who was released in April, complained of harsh treatment in Qanater prison, describing their subjection to multiple incidents of abuse and intimidation by National Security Agency officers, noting that many prisoners were forbidden from receiving visits without justification. Abd El Fattah and Massry also described being stripped of their personal belongings, including their blankets and warm clothes, adding that many of their fellow detainees had been subjected to the same treatment.

Columnist Gamal al-Gammal, who was forcibly disappeared for a month upon arrival to Egypt in February, was also facing terrorism charges. Gammal, known for his political commentary and criticism of Abdel Fattah al-Sisi, used to have a regular column in the privately owned Al-Masry Al-Youm until it was discontinued in 2015, after which he moved to Turkey and began to write for the Arabi21 news outlet.