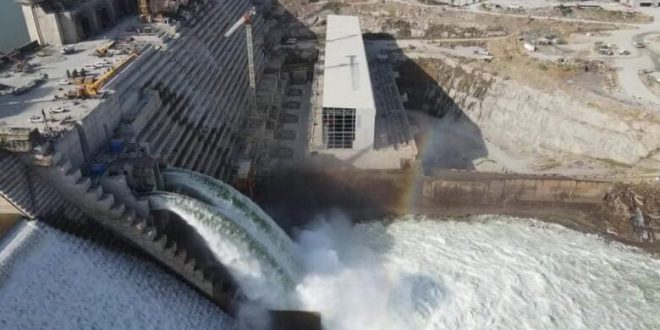 Shoukry started his preparations in New York by meeting Ambassador Tarek Ladeb, the permanent representative of Tunisia to the United Nations, at the headquarters of the Egyptian mission.

This was followed by a meeting with the Arab Committee concerned with following up the developments of GERD issue and coordinating with the Security Council, consisting of Jordan, Saudi Arabia, Iraq, Morocco and the Arab League.

Shoukry also met with the group of African countries in the Security Council, which includes Niger and Kenya, to explain Egypt’s position towards the Renaissance Dam.

This came after the Egyptian Minister of Irrigation and Water Resources, Mohamed Abdel-Ati, issued a statement Monday n which he said that he had received an official letter from his Ethiopian counterpart stating that Ethiopia has started the process of filling for the second year of the GERD reservoir.

Abdel-Ati addressed an official letter to the Ethiopian minister to inform him of Egypt’s flat refusal of this unilateral measure, which is a clear and dangerous breach of the Declaration of Principles Agreement.

He stressed that this is a violation of international laws and norms that govern projects built on the common basins of international rivers, including the Nile River, and the exploitation of its resources is regulated by agreements and charters that oblige Ethiopia to respect Egypt’s rights and water interests and prevent harm to it.

The Egyptian Foreign Ministry also sent the letter addressed by the Minister of Irrigation and Water Resources to the Ethiopian Minister to the President of the UN Security Council to inform the Council – which will hold a session on GERD issue on Thursday – of this dangerous development.

The Egyptian statement said that this development once again reveals Ethiopia’s bad faith and insistence on taking unilateral measures to impose a de facto situation and fill and operate GERD without an agreement that takes into account the interests of the three countries and limits the damages of this dam to the downstream countries, which will increase the state of crisis and tension in the region.

It will create a situation that threatens peace and security at regional and international levels, the statement said.

International Relations and Cooperation
All
2021-07-06
asaeid
Previous Egypt angry as it says Ethiopia has resumed filling GERD
Next Egypt is one of world’s worst 10 countries for workers, ITUC says