Home / Normal / Egypt executions: What you need to know 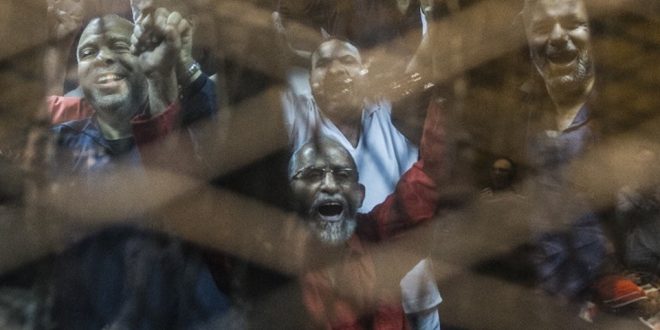 Egypt executions: What you need to know

Since the rise to power of President Abdel Fattah el-Sisi in Egypt following the overthrow of his predecessor Mohamed Morsi in 2013, the country has seen a wave of repression against political dissidents, sparking outrage from human rights organisations.

The widespread use of the death penalty has become a major focus for concern, as hundreds of people have been sentenced to death since 2013. So far, at least 51 men and women have been executed in 2021 alone.

According to the Geneva-based Committee for Justice rights group, at least 92 opponents of Sisi have been executed since 2013

In 2020, the number of executions in Egypt tripled from the year before, making the country the third-most prolific executioner after China and Iran, according to Amnesty International.

Many of those executed have been described by rights groups as “prisoners of conscience” detained due to their political opposition to the Sisi government.

On 14 June, Egypt’s highest appeals court upheld the death sentences issued against 12 members of the opposition, paving the way for their potential imminent execution.

The court’s decision put an end to a mass trial that began in December 2015, involving 739 defendants who were charged with involvement in the 2013 Rabaa Square sit-in protest against the overthow of Morsi – Egypt’s first democratically elected president, who hailed from the Muslim Brotherhood.

According to the Geneva-based Committee for Justice rights group, at least 92 opponents of Sisi have been executed since 2013, and final death sentences have been issued for 64 others who may be executed at any moment.

However, if the death penalty against the 12 Brotherhood leaders is carried out, it would be the first time under Sisi’s rule that well-known opposition figures are executed.

With another round of executions set to be carried out in the country, Middle East Eye takes a look at Egypt’s use of the death penalty.

What is the process?

When a court sentences a defendant to death, they are first given a preliminary sentence before their case is referred to the grand mufti, who issues an opinion. Though non-binding, these opinions can be influential, and the trial judge will take them into consideration before confirming the sentence.

Cases can be appealed before the Court of Cassation, Egypt’s highest court. If this fails, the president of the country then has 14 days to approve or commute the sentence.

Executions are carried out by hanging for civilians, and firing squad for military personnel.

How many executions are carried out?

Egypt has one of the highest execution rates in the world. In 2020, it was third only to Iran and China in the number of recorded executions, after a more than threefold rise in the span of a year – from 32 in 2019 to 107 in 2020.

According to rights group Reprieve, there have been at least 53 mass trials in Egypt since 2011, in which 2,182 people were sentenced to death.

At least 17 children have received preliminary death sentences during the same time period.
What do rights groups say?

Human rights groups have repeatedly criticised the process by which death penalties are handed to defendants.

Torture is commonplace in Egyptian prisons, and many confessions extracted under torture end up used as the main basis for prosecution.

Amnesty International described the death sentences handed down to the 12 defendants following a mass trial of 739 people as “deeply unfair”, and criticised the decision made by the Court of Cassation in mid-June to uphold the sentencing as “ruthless”.

Human Rights Watch (HRW) said the trial, which was adjourned several times due to the number of defendants being so large that no courtroom could accommodate them, has been marred by abuses from the outset.

HRW said that the mass trial, by nature, failed to establish individual criminal responsibility and was based on unsubstantiated testimonies by security officers. The circumstances of detention, barring the defendants from contact with their families and lawyers, also undermined the right to defence, the group said.

Who are the main targets?

Since 1982, Egypt has been a signatory to the International Covenant on Civil and Political Rights, which states that “in countries which have not abolished the death penalty, sentences may be imposed only for the most serious crimes”. Such crimes, the covenant says, must be committed intentionally and with “lethal or extremely grave consequences.”

According to Reprieve, Egypt has executed at least 241 people since 2018 – 153 of them for non-political criminal charges.

The rest have come from a range of backgrounds, largely supporters or alleged supporters of the Muslim Brotherhood and other Islamist groups. 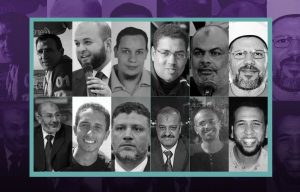 So who are the 12 men currently facing the threat of imminent execution?

The former general secretary of the Muslim Brotherhood, Mohamed el-Beltagy was a physician and lecturer at Cairo University’s medical school. He was elected as a member of parliament in 2005 and 2012. He is a 58-year-old father of five.

His daughter, 17-year-old Asmaa el-Beltagy, was among the hundreds of protesters killed in the violent dispersal of the Rabaa square sit-in on 14 August 2013. His son Anas el-Beltagy has been held in pre-trial detention in solitary confinement for seven years.

Beltagy was arrested on 29 August 2013. He has repeatedly complained of medical negligence while in prison, including when he suffered a stroke two years ago and was not granted the follow-up care recommended by the prison physician.

Beltagy was arguably the most outspoken Brotherhood member during the reign of longtime autocrat Hosni Mubarak. Under Mubarak’s rule, he was elected twice as a member of parliament for the Shubra el-Kheima constituency.

Even though the Brotherhood was accused of not taking part in the early days of the 2011 anti-Mubarak protests, Beltagy was among those who were present from day one. On 25 January 2011, he took part in a protest against police brutality in front of the High Judicial Council in Cairo’s Ramsis street, alongside fellow members of the Kefaya movement.

He was also a pro-Palestine activist, and was among those on board the MV Mavi Marmara during the 2010 Gaza flotilla raid.

Osama Yassin, 56, is a physician and served as minister for youth in ousted president Mohamed Morsi’s government.

During the 2011 uprising, Yassin was the Brotherhood’s protest coordinator, playing a central role in the mobilisation that culminated in Mubarak’s removal from power. He was detained on 26 August 2013 in the wake of the crackdown on the Rabaa sit-in.

In a speech before the court in May 2016, Yassin said that the reason for his prosecution was his role in the revolution. “My offence is taking part in the 25 January revolution as one of its leading figures,” he said.

“The objective of these trials is to turn those who had a leading role in the revolution into examples for others to deter the people from another revolution,” he told the judge. “The victims of Rabaa are the ones standing trial, while the real culprits in spilling blood are at large.”
Ahmed Aref

Born in Kuwait on 25 December 1981, Aref is a dentist by training, and the former media spokesman of the Muslim Brotherhood.

He is a graduate of Ain Shams University’s dental school, and was a leader within Egypt’s union of dentists.

Aref was arrested in his home on 22 August 2013, one week after the dispersal at Rabaa. He has been under trial in two cases linked to the sit-in. He was sentenced to five years in prison in the first case, dubbed “the Rabaa operations room”. He was simultaneously added to the second Rabaa case, in which he was handed a death sentence.

“This sentence, like hundreds issued since the coup, is politically motivated and unjust. The trials aim at one thing: retaliation for those who participated in the 25 January revolution,” his father said.

Aref’s family have said that they have been barred from visiting him in prison for more than three years.

Abdelrahman el-Barr, 58, is a professor of Islamic Studies at Al-Azhar University and served as a member of the Guidance Bureau of the Muslim Brotherhood.

His brother said that the family, including his five children, has been barred from visiting him in prison for the past three years.

“We know nothing about him or his health condition,” he said. “We don’t even know where or in what conditions he is held.”

Attia is a 46-year-old physician. He was arrested on 24 July 2013, when security forces raided his workplace in Cairo to arrest the company’s director, Mohamed al-Zanati. When Attia asked the plainclothes officers on what basis they were arresting Zanati, they arrested him as well, with a police officer reportedly saying: “Let’s take him too, this case requires another accused.”

Attia said he was subjected to numerous forms of torture in detention, including electric shocks, beatings, being dragged on the ground and suspended in the air.

Mohamed Mahmoud Ali al-Zanati is a 61-year-old physician. He was detained on 24 July 2013.

Ehab Wagdy, 37, is a software engineer. He was arrested on 14 August 2013 in the vicinity of Rabaa Square.

Safwat Hegazy, 56, is a Salafi television host and preacher. He was arrested on 21 August 2013. Even though he was not affiliated with the Brotherhood, he was among the most prominent opponents of the coup against Morsi.

The 37-year-old lawyer was arrested on 15 July 2013 in what became known as “the finger case”. Mohamad was accused of torturing a person and cutting off his finger – a claim the victim later admitted was false.

Mohamad was sentenced to three years in prison – but while serving the sentence, he was added to the Rabaa mass trial, despite having already been in prison prior to the sit-in’s dispersal.

El-Araby, 36, is a civil engineer. He was arrested on 15 July 2013 when he tried to help a wounded protester while driving on Cairo’s ring road. He is the father of a 10-year-old boy and an 8-year-old girl.

Mohamed el-Faramawy is one of two siblings arrested on 15 July 2013 in connection with the “finger case”. The 40-year-old teacher was arrested while trying to assist a wounded protester. He is the father of an eight-year-old boy.

Mostafa el-Faramawy was arrested alongside his brother on 15 July 2013. He is 30-years old and worked as a computer engineer prior to his detention.