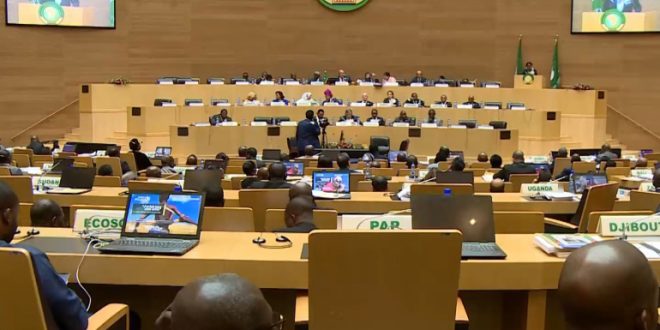 This came during a meeting held between Faki and Sudanese Prime Minister Abdalla Hamdok in Khartoum, according to a Sudanese government statement.

“It has been agreed with Sudan to provide additional information regarding the file of the Renaissance Dam negotiations to the African Union Commission,” Faki said.

In turn, Hamdok briefed the AUC president on the developments in the negotiations of the Renaissance Dam; stressing that his country’s position can be summarised in the need to reach a binding legal agreement on filling and operating the dam.

The Sudanese PM highlighted the need for reaching this agreement “so that Sudan can set its development projects and avoid any damage that could result from the lack of detailed information on filling and operating processes.”

Faki arrived in Khartoum on Saturday on a two-day official visit, during which he met with the President of the Sudanese Sovereignty Council, Abdel Fattah Al-Burhan, and his deputy Mohamed Hamdan Daglo, along with PM Hamdok.

Ethiopia has insisted that it plans to begin the second phase of filling the dam during this year’s rainy season in July even if no agreement is reached with downstream countries Sudan and Egypt.

Ethiopia is building a $5 billion dam near the border with Sudan it says will provide the country with much-needed electricity and economic regeneration. Egypt believes it will restrict its access to Nile waters.

Egypt is almost entirely dependent on Nile water, receiving around 55.5 million cubic metres a year from the river, and believes that filling the dam will affect the water it needs for drinking, agriculture, and electricity.

Cairo wants Ethiopia to guarantee Egypt will receive 40 billion cubic metres or more of water from the Nile. Ethiopian Irrigation Minister Seleshi Bekele said Egypt has abandoned this demand, but Egypt insists it hasn’t and issued a statement to this effect.