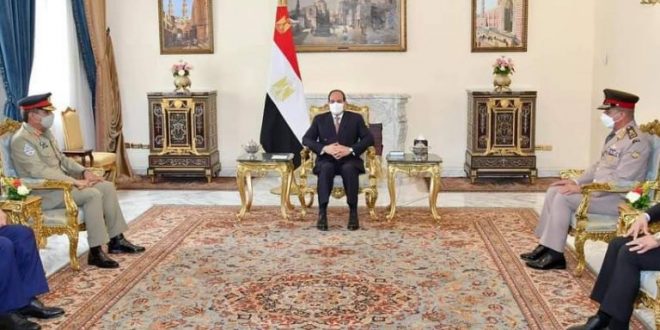 This came during a meeting held between the two officials in the capital, Cairo, in the presence of Egyptian Minister of Defence Lieutenant-General Mohamed Zaki, according to a statement issued by the Egyptian presidency.

During the meeting, Al-Sisi and Raza discussed “means of enhancing bilateral cooperation between the two countries in a number of fields, especially at the security and military levels, in addition to defence and military industries.”

The two sides also reviewed the latest developments in the Middle East and the Muslim world, stressing the importance of continuing intensive coordination between Egypt and Pakistan to maintain regional peace and security and combat terrorism.

During the meeting, Al-Sisi expressed his country’s aspiration to “develop cooperation with Pakistan and exchange experiences in various fields, and keenness to enhance coordination and consultation on various regional issues,” the statement said.

Chairman of the Joint Chiefs of Staff Committee of the Pakistani armed forces arrived in Cairo yesterday on an official visit to discuss ways of enhancing bilateral cooperation.

On 26 May, Egyptian and Pakistani air defence forces conducted joint military training in Egypt for the first time.

On 17 February, the two countries agreed to step up cooperation to combat terrorism, during a joint press conference held by the Egyptian Foreign Minister Sameh Shoukry with his Pakistani counterpart Shah Mahmood Qureshi in Cairo.