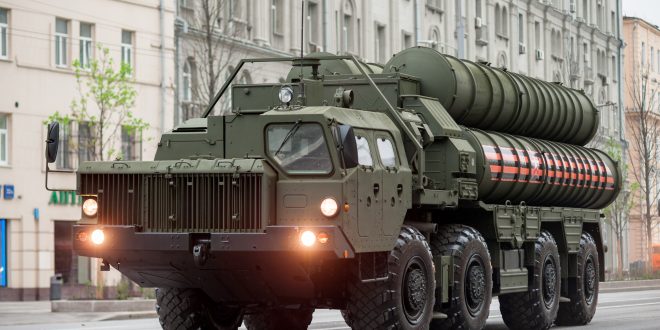 The United States has reiterated its willingness to impose sanctions on allied nations if they buy Russian weapons systems, a move that could have significant implications for countries in the Middle East.

“It’s very important going forward that Turkey, and for that matter all US allies and partners, avoid future purchases of Russian weaponry, including additional S-400s,” Blinken said last month.

“Any significant transactions with Russian defence entities, again, could be subject to the law, to CAATSA, and that’s separate from and in addition to the sanctions that have already been imposed,” he added.

The Countering America’s Adversaries Through Sanctions Act, or CAATSA, is a US federal law introduced in 2017 that obliges the US to impose sanctions on any person that makes a “significant transaction” with Russia’s defence sector. For purchasing, taking delivery of, and testing the S-400, in the face of US warnings, Turkey had CAATSA sanctions slapped on its Presidency of Defence Industries (SSB) agency in December 2020.

Blinken’s warning served as a reminder that Ankara, a US ally and fellow Nato alliance member, could face additional sanctions if it acquires more S-400s. It was also a statement aimed at reminding Middle East allies that Washington would not remain silent if they turn towards Moscow for arms.

“Turkey is now under US CAATSA sanctions for purchasing Russian S-400s, and there is a possibility that such sanctions will be applied to other Middle Eastern states,” Mark Katz, a nonresident Senior Fellow at the Atlantic Council and professor at the Schar School of Policy and Government at George Mason University, told Middle East Eye.

“Moscow, of course, would be very happy to see the US do so, for that would mean more deteriorating relations between the US and its traditional Middle Eastern allies for Russia to take advantage of,” he added.

Despite similar warnings about the prospect of triggering CAATSA sanctions, Egypt recently pushed ahead with a $2bn deal for 24 advanced Su-35 Flanker-E fighter jets from Russia. It has already taken delivery of at least five of them.

Over the past decade, Cairo also bought several high-end Russian weapons systems, the largest procurement of arms it has made from Moscow since the 1970s.

Nicholas Heras, programme head for State Resilience and Fragility at the Newlines Institute for Strategy and Policy, believes this is because of the specific capabilities of the S-400.

“The United States is mostly concerned over the S-400s because that anti-air system has capabilities that could compromise US-made, next-generation fighter aircraft, especially the F-35s,” Heras told Middle East Eye.

Turkey was suspended from the fifth-generation F-35 Joint Strike Fighter programme and had its order for a fleet of the stealth jets cancelled the moment it began taking delivery of its first S-400 components in July 2019.

One reason the US opposed Ankara’s S-400 purchase, aside from inter-operability issues, was over concerns that the system could allow Russia to gather sensitive data about F-35 jets.

Heras pointed out that these air defences “often come with a backdoor for Russian technicians to assess data taken from S-400 systems; that could be an intelligence bonanza for the Russians on advanced US systems”.

On the other hand, Russian military hardware such as fighter jets and tanks are “less worrisome” for the US, even though Washington would prefer its allies and partners buy American or European hardware rather than Russian or Chinese.

“The S-400 is a red line for the United States, and all its genuine partners know that,” Heras said.

In the “specific case” of Egypt, the US is giving Cairo more leeway because of its peace deal with Israel.

“Egypt is too big for the Biden team to bully out of buying Russian arms,” Heras said.

“In fact, it is best to think of it as exactly that, a collection of tools that the US administration is able to use – or not – at its own discretion,” Tack told MEE.

While the US did impose CAATSA sanctions on Turkey, Tack sees no reason to expect the US administration to impose sanctions on every country that maintains any military relations with Russia.

“There is a level of pragmatism that is required in applying a sanctions tool of this nature, lest it remove the initiative of the US administration to shape its strategic relations across the globe,” he said.

In many cases where CAATSA sanctions could well be applicable – such as Egypt, Iraq, the UAE, Saudi Arabia, as well as India – the US is less likely to apply them “to avoid damaging diplomatic and military relations that it itself maintains with those nations”.

“The United States depends on its alliances with these countries to manage security across the Middle East and Asia, and even though the administration may want to take a tough stance on Russia, use of CAATSA would likely mean sacrificing those relationships,” Tack added.

The Turkish case was “mildly different” since those sanctions, imposed by a reluctant Trump administration in its final days, came amid the broader backdrop of deteriorating US-Turkey diplomatic relations following the failed July 2016 coup attempt in Turkey.

“With less to lose at that point, CAATSA provided a useful tool not only to try and thwart Russian military sales to Turkey but also to increase the pressure on Turkey itself,” Tack said.

Katz believes that CAATSA is fundamentally flawed, given the differing threat perceptions US allies around the world have today – compared with the days of the Cold War.

“The basic problem as I see it is that, while during the Cold War the Soviet Union was regarded as an adversary by the US and all its allies throughout the world, nowadays allies in different parts of the world prioritise their main adversary differently,” he said.

Consequently, while most US allies in Europe view Russia as their main threat, that’s not the case with American partners in Asia, which primarily fear China, or US allies in the Middle East, which regard Iran and threats posed by militant groups as far more significant problems than Russia.

“The choice for Washington, then, is does it realise that its insistence on sanctions observance by allies everywhere is counterproductive, or does it insist that they comply and risk deteriorating alliance relationships?”

International Relations and CooperationSecurity Forces
All
2021-05-27
asaeid
Previous Has Egypt turned the page on discord with Hamas?
Next Russia in the Mediterranean: Here to Stay