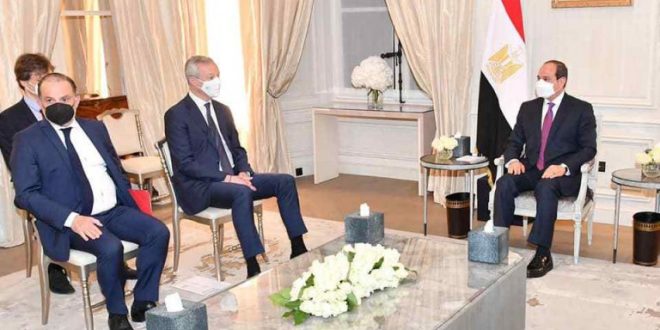 Egyptian President comments during his meeting with his Senegalese counterpart Macky Sall in Paris.

Egypt’s President Abdel Fattah Al-Sisi reiterated, on Wednesday, the Egyptian firm position on the need to reach a binding and comprehensive legal agreement to fill and operate the Grand Ethiopian Renaissance Dam (GERD).

Al-Sisi’s comments during his meeting with his Senegalese counterpart Macky Sall in the French capital, Paris.

The two leaders agreed that bilateral coordination would continue in the coming period regarding a resolution to the issue. This would help avoid its negative impact on the security and stability of the entire region.

Al-Sisi expressed Egypt’s readiness to strengthen bilateral cooperation with the Senegalese side in various fields, especially trade exchange, investment, infrastructure development, providing technical support, and capacity building. This comes in connection with the results of the Egyptian President’s successful bilateral visit to Dakar in April 2019.

Egyptian Presidency Spokesperson Bassam Rady said that Sall praised the continual development in the course of bilateral relations between the two countries.

He expressed his great appreciation to Egypt, its people, and its leadership, whilst also applauding the vital Egyptian role in efforts to achieve comprehensive development, and maintain peace and security, in the African.

The meeting between the Egyptian and Senegalese leaders follows news reports which mentioned that Ethiopia is soon to have completed construction on 80% of the dam.

Also on Wednesday, Al-Sisi applauded the French Government’s efforts to boost economic cooperation between the two countries. At a meeting with France’s Minister of Economy and Finance, Bruno Le Maire, Al-Sisi added that there are many investment opportunities for French investors in Egypt, especially in transport, energy, water, and health.

Le Maire underlined that France is keen on boosting joint cooperation with Egypt, whilst offering modern technology in all fields, Rady pointed out.

On Tuesday evening, Al-Sisi called on the international community to provide the necessary support that African countries need in the face of the novel coronavirus (COVID-19) pandemic. The president’s call highlighted that the world will not be able to overcome the pandemic without all countries having access to the necessary vaccinations to restart their respective economies.

Al-Sisi’s remarks on the matter came during his speech, on Tuesday, in the “External Finance and Debt” session. The event was held as part of the Summit on Financing African Economies in Paris, and saw the participation of leaders and heads of government from about 30 countries.

He praised the initiative set up by French President Emmanuel Macron to hold the Summit on Financing African Economies, which represents an important opportunity for consultations on ways to direct support to African economies.

This is especially given the economic slowdown resulting from the global health crisis that the world is currently experiencing, and which affects the efforts of African countries to achieve development. The slowdown also affects the implementation of the goals defined as part of the continent’s 2030 Agenda, and the African Union’s (AU) Agenda 2063.

President Al-Sisi added that, in the pre-pandemic period, Africa witnessed an unprecedented acceleration in economic growth rates, which made it a destination for the movement of cross-border investments. He stressed that the evidence confirms that the volume of support directed to the continent is much less than its actual need.

“The current period is seeing weak access for citizens of African countries to coronavirus vaccines, in a way that contributes to exacerbating the economic and social problems resulting from the pandemic,” Al-Sisi added.

The president indicated that Africa’s achievements in terms of economic development is witnessing a tangible decline in the current period, due to the negative repercussions of the pandemic.

This has clearly reduced the sources of foreign exchange (FX) income for the continent, which has also caused great pressure on the amount of liquidity available.