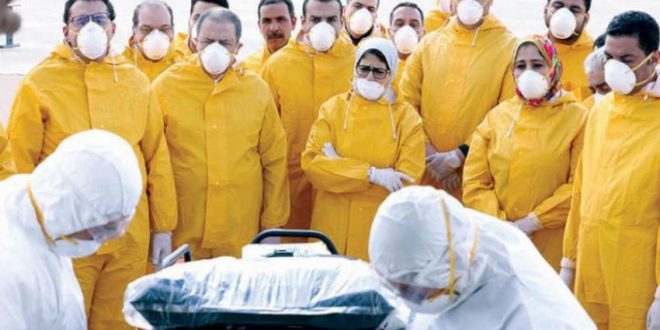 Sixty-one doctors have died from coronavirus since the start of April, the Egyptian Medical Syndicate announced this week.

Egypt has recorded the world’s highest fatality rate among medical personnel amid the Covid-19 pandemic, according to syndicate figures analysed by social media campaigners.

Sixty-one doctors have died from coronavirus since the start of April, the Egyptian Medical Syndicate announced this week.

“The number of doctors who died since the start of the coronavirus crisis has so far reached nearly 500,” the syndicate said, adding that the figure of 115 compiled by the Health Ministry only included medical personnel working in hospital reserved for Covid-19 patients.

In a press conference held on April 24, Health Minister Hala Zayed had said the other doctors had contracted the virus through social interactions, rather than on the workplace, according to Egyptian media.

The syndicate claims it sent five letters to the ministry in March, demanding vaccinations for all medical personnel, but received no response.

Zayed blamed inoculation rates on low turnout rates among medical personnel. According to the Minister, only 60 percent of doctors had registered to receive the vaccine, but only half have showed up for the jab.

The campaign group “Empty Egyptian Prisons”, which opposes the rule of President Abdel Fattah al-Sisi, launched a call on Twitter to “save doctors.”

“According to the figures announced by the syndicate, Egypt has the highest global number of deaths among medical operators over the total number coronavirus-related deaths,” the campaign said in a Tweet.