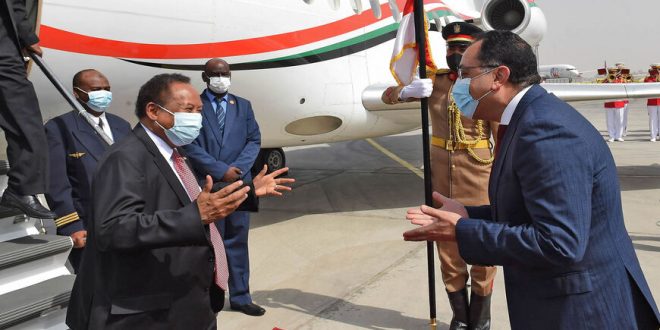 Egypt and Sudan are trying to intensify their efforts to pressure the Italian contracting giant Salini Impregilo (currently Webuild) that had won a contract to build the Grand Ethiopian Renaissance Dam (GERD) in Ethiopia.

Sudan recently declared its intention to sue the Italian company should Addis Ababa proceed with the second filling stage of the dam’s reservoir.

Sudan’s Irrigation Minister Yasser Abbas said in an April 23 statement, “In the event the second stage of filling the GERD was completed without reaching a legally binding agreement, our legal teams, with the help of international law firms, will file a lawsuit against the Italian company that executed the dam’s project and against the Ethiopian government.”

He explained, “The lawsuit against the company would be based on the fact that environmental and social impacts resulting from the dam’s construction were not considered.”

Egypt also joined the effort to pressure the Italian contractor. On April 24, the Egyptian community in Italy organized a protest in Rome against Salini Impregilo, which was awarded back in March 2011 a $4.8 billion contract to build the GERD.

The Italian company has been operating in Ethiopia since 1957, according to statements by its CEO Pietro Salini in October 2019 during his meeting with Ethiopian Deputy Prime Minister Demeke Mekonnen in Rome.

Salini confirmed during the 2019 meeting that his company is committed to the responsibility entrusted to it by the Ethiopian government and people, which “is the completion of the project according to the schedule and with the required quality.”

In 2019, Egypt officially informed Italy of its dissatisfaction with Salini Impregilo’s ongoing work in the GERD. The Egyptian Deputy Foreign Minister for African Affairs, Hamdi Sanad Loza, held a meeting on Oct. 13, 2019, with the Italian ambassador to Egypt. Loza had stressed that his “country is discontent with the company’s ongoing work in the dam despite the lack of studies on the dam’s economic, social and environmental impact on Egypt. The company also knew about the faltering negotiations as a result of Ethiopia’s intransigence.”

Loza added during the meeting with the Italian ambassador, “The failure to conduct studies to this effect and to reach an agreement on filling and operating the GERD represents a violation of Ethiopia’s obligations under the Declaration of Principles and the rules of international law.”

Cairo, however, was keen not to accuse Rome of participating in the construction of the GERD. Egypt’s ambassador to Italy, Amr Helmy, said back in February 2014, “Italy understands Egypt’s position and supports dialogue in order to resolve the dispute between Egypt and Ethiopia regarding the dam.”

He added, “The dam does not receive official support or funding from the Italian government. The Salini Impregilo company is a private company that operates with a business logic and has long experience in building dams in Africa.”

Mario also praised Salini Impregilo’s capabilities in building the dam, stressing that “the Ethiopian government is familiar with the contractor’s competences given the latter’s other development projects in Ethiopia. This is why the Italian company will work hard to complete the Ethiopian [GERD] project.”

In a report dated June 2020, the Egyptian daily Youm7 said that the Italian Corriere della Sera newspaper accused Salini Impregilo of having failed from the outset to assess all the economic and technical risks and negative impact of the dam on Ethiopia itself.

In statements to Corriere della Sera in June 2020, an Italian anthropologist at Oxford University criticized the Italian company for participating in the construction of the GERD. “The company is taking part in a dangerous project, under the pretext that is working for the benefit of Africa, which is not true. The dam will cause a great deal of damage to this African country [in reference to Ethiopia],” he said.

He added, “The GERD violates the rights of the people who live on the banks of the river, including farmers who grow crops along the Nile River bank, and will cause the migration of fish, which risks a significant decrease in the fish wealth in Ethiopia.”

Amani al-Tawil, director of the African Program at Al-Ahram Center for Political and Strategic Studies, told Al-Monitor, “The escalatory steps by Egypt and Sudan against the Italian Salini company will greatly affect the GERD crisis.”

“The Egyptian-Sudanese campaign against the Italian contractor will affect its reputation and investments in Africa and threaten its projects,” she said.

Tawil explained that “Egypt and Sudan accuse the Italian contractor of brushing aside the dam’s safety and storage capacity. There have been official statements from both countries that the dam has chances to collapse.”

She added, “In a bid for a rapprochement with Salini Impregilo, Egypt could try to conclude agreements with the company or facilitate its investment projects on Egyptian territories in order to negotiate or pressure it in relation with the investment projects that are related to Egypt.”

Salini Impregilo is undertaking the first phase of a project to reconstruct the 1,700-kilometer-long (1,056-mile) international highway that extends from the Egyptian border all the way to the border in Tunisia. The first phase of the project, which was announced in 2017, is estimated at a value of 963 million euros ($1.16 billion), and will kick off from the Sallum port in Egypt to the city of al-Marj along 400 kilometers (248 miles) — although no date for the project’s launching has been announced yet.