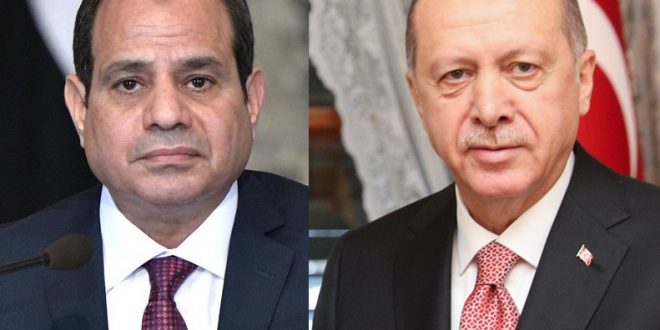 What warming Egypt-Turkey ties could mean for the Middle East

Talks between the two sides at the level of intelligence began last summer but developed diplomatically in March, when the first actual steps took place towards normalising ties which had been completely severed since Egypt’s coup in July 2013.

Egypt’s maritime deal with Greece last summer, which established the partial demarcation of sea boundaries between the two countries, indicated to Ankara that Cairo respected the Turkish continental shelf, leaving the door open to reconciliation, which began a process of communication between their respective intelligence agencies.

Regardless of who took the first step, the thaw in ties between Egypt and Turkey will inevitably extend to other areas in which both countries play a crucial role, at both the regional and international level.

In Libya, Turkey and Egypt support two different sides in the conflict. Ankara played an important and decisive role in ending the siege of the capital, Tripoli, and helped to tilt the balance of power in favour of the Government of National Accord (GNA).

Egypt’s direct military intervention in favour of the Libyan parliament in Tobruk and General Khalifa Haftar, meanwhile, helped to calm the conflict, leading to the signing of a general ceasefire and eventually to the formation of a joint Libyan government led by Abdul Hamid Dbeibeh and Mohamed al-Menfi as head of the Libyan Presidential Council.

Of course, these positive steps in no way mean the end of the conflict, as seen in the US annual threat assessment released earlier this month by the US intelligence community. The report cautions that the Libyan civil war will continue throughout 2021 despite political progress, and that the conflict might even escalate. The trajectory of events in Libya could, however, be closely connected to the results of ongoing Turkish-Egyptian talks.

Cairo, through its military presence in eastern Libya, is able to control developments there and the important Turkish role in Tripoli can reduce the level of any tensions that may arise. The two countries therefore have the potential to push for a political solution, while protecting their interests on the ground, in a way that no other regional or European actors involved in Libya could do.

According to officials from the two countries, the maritime border between Egypt and Turkey is a priority and a starting point for talks between both sides. This issue and its consequences will be reflected in tensions in the Eastern Mediterranean, and more specifically in Athens.

Following the announcement of the start of diplomatic talks between the two countries, the Greek foreign minister visited his Egyptian counterpart three times, while the Greek prime minister also met with President Abdel Fattah al-Sisi in Cairo. These successive visits illustrate the anxiety and fear of the current Greek government about the impact of this rapprochement on the map of the Eastern Mediterranean.

Any Turkish-Egyptian agreement on a direct maritime border between them will have three implications. The first is that a new accord, following the memorandum of understanding with Tripoli in late 2019, will support the Turkish narrative on maritime rights in the Eastern Mediterranean. The second is that there will be no maritime borders between Greece and Cyprus, while the third is the inevitability of a Turkish role in the Eastmed pipeline project to transport gas from Israel to southern Europe.

This new reality will not be accepted by Athens, which will reject it, just as it did with the Turkish-Libyan memorandum. Greece will then try to raise the level of tensions in the Eastern Mediterranean to support its position.

Furthermore, it is likely that Greek-Egyptian relations will decline following any Turkish-Egyptian rapprochement. The fact that Egypt was not invited to a recent joint meeting of the foreign ministers of Cyprus, Greece, the UAE and Israel symbolises in a sense that this negative atmosphere has already begun.

In the wider Middle East, tensions rose in sensitive areas after Joe Biden’s arrival to the White House, as Houthi militia rockets and drones hit the territory of the Kingdom of Saudi Arabia, from the capital Riyadh to Jizan in the south. The Iran-Israel shadow war also escalated at sea, with the possibility of a dramatic expansion, especially after Israel’s attack on the Iranian nuclear reactor at Natanz. Meanwhile, nuclear talks between the US, Europe, and Iran are still pending.

This complex situation will be directly affected by the Turkish-Egyptian rapprochement. Saudi Arabia, which is taking its own steps towards normalisation with Ankara, will be more encouraged to re-establish relations with Turkey due to the need for military support, considering the situation in Yemen and tensions with Tehran. Earlier this week, Turkey said it was seeking to repair relations with Riyadh, even adding that it respected a Saudi court’s decision regarding Jamal Khashoggi’s killing, indicating a shift in tone for bilateral relations.

As the region begins to see the rebuilding of new alliances, starting with the normalisation between the UAE and Israel, which may expand to include Bahrain and Saudi Arabia, Ankara’s accession to the alliance will have a significant impact on the equation of the conflict with Tehran in the region. In this scenario, the starting point will be the normalisation of Turkey-Egypt relations.

Certainly, the current steps Ankara and Cairo are taking are important in beginning the process. However, it is still too early to predict the future of these talks, as the positions of both capitals are in many respects contradictory. In addition, Cairo’s allies – from Abu Dhabi to Athens – are apprehensive about any rapprochement taking place, as it could undermine their strategic plans.

The Turkish foreign minister’s visit to Cairo in May could be decisive; it could either be the key to ending the dispute, or could halt progress altogether.

All of this is taking place under the shadow of a new US administration that has had a negative view of Turkey since the Obama-led administration and does not see eye-to-eye with the Egyptian regime. This reality, however, is an important incentive that could also push Ankara and Cairo closer together.