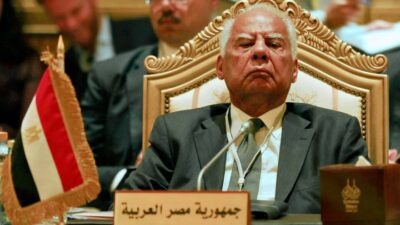 The Biden administration has said a lawsuit against former Egyptian Prime Minister Hazem el-Beblawi, over his alleged involvement in torture, should be thrown out due to diplomatic immunity privileges he held at the time.

In a filing submitted last week in a district court in Washington, the US Justice Department said “El Beblawi held diplomatic status at the time when the suit was commenced” and the court should dismiss “claims falling with the scope of his immunity”.

“Once the Department of State determines an individual’s diplomatic status, courts must not look behind the certification to perform their own analysis of its basis,” Justice Department lawyers wrote in the filing, adding that it was not taking a position in the lawsuit itself.

Egyptian-American activist Mohamed Soltan, who spent 643 days in prison in Egypt, filed the lawsuit against Beblawi last June, in which he accused the former prime minister of direct responsibility for his treatment, which included being shot, beaten and tortured.

Beblawi, who was trained as an economist at the Sorbonne in Paris, was living in Mclean, Virginia and was on the executive board of the International Monetary Fund in Washington at the time the suit was filed.

While civil lawsuits cannot usually reach foreign governments and leaders, Soltan sued Beblawi under the Torture Victim Protection Act, a 1991 US law that allows victims of torture to sue for compensation from their tormenters if the accused are in the United States and no longer head of state.

In response to the Biden administration’s filing, Soltan expressed his “deepest disappointment”.

“The Biden State Department has erred in its interpretation of the law, policy, and moral judgement,” he said in a statement posted on Twitter.

“And in doing so, it has further endangered my life here in the US, and the lives and wellbeing of my family in Egypt.”

A ‘blank cheque’ for Sisi

US President Joe Biden and his administration have been vocal about human rights abuses in Egypt, and Biden has previously said that there would be “no more blank cheques for Trump’s favourite dictator”, referring to Egyptian President Abdel Fattah el-Sisi.

Biden also noted the case of Soltan, and said that torturing and exiling of activists like him was “unacceptable”.

Still, rights advocates have slammed the administration for authorising the sale of $200m in weapons to Egypt, saying that Biden’s rhetoric on human rights “has zero value when it’s accompanied by the wink and nod of continued military support to Egypt’s dictatorship”.

The sale was announced at the same time news emerged that Egyptian authorities had arrested additional members of Soltan’s family.

In his statement, Soltan referred to the administration’s filing for Beblawi’s immunity as a “blank cheque” to Sisi, and was “antithetical to the Biden administration’s stated commitments to foreign policy that is centred on human rights”.

Still, the rights activist said he planned to continue his legal battle, despite the administration’s declaration.

“We will allow the court to resolve the immunity issue, as my case is still viable, active and timely. This matter is not over.”

The court granted Soltan’s lawyers the opportunity to formally respond by 19 April.