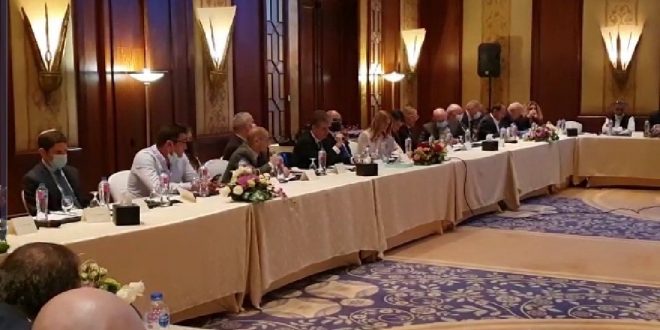 Egyptian and Israeli intelligence and trade officials held a meeting in Cairo described as “historic” on Tuesday, in a bid to boost economic, security, and tourism ties, as well as scale up the fight against “radical Islamic terrorism”.

Israeli Intelligence Minister Eli Cohen led a delegation of officials from his ministry and trade representatives to the Egyptian capital, saying that this was the largest Israeli delegation to visit Egypt in 20 years.

“This is a historic visit that was made possible due to talks we secretly led between our governments for two years, and now business owners have entered the conversation,” The Jerusalem Post quoted Cohen as saying.

The Israeli newspaper Israel HaYom said that around 60 Israeli and Egyptian businesspeople attended the meeting and discussed cooperation in a variety of fields, including energy, agriculture, textiles, and water desalination.

Ofir Gendelman, a spokesman for Israeli Prime Minister Benjamin Netanyahu, tweeted that bilateral trade between Egypt and Israel was expected to reach US$1 billion by 2022.

Egyptian and Israeli officials also discussed the fight against “radical Islamic terrorism” in the Sinai Peninsula, the Israel Broadcasting Authority also reported. An Islamic State group has led an insurgency in Sinai in recent years, carrying out frequent attacks on Egyptian security forces there.

“Egypt is interested in promoting cooperation with Israel in every area,” Deputy Egyptian Intelligence Minister Nasser Fahmi said, according to the Israeli intelligence ministry.

“We will continue to act in the future to strengthen economic and bilateral relations.”

The Egyptian and Israeli officials also discussed reopening the resort of Sharm El-Sheikh in southern Sinai to Israeli tourists, according to The Jerusalem Post. Egypt has recently completed a 43-kilometre fence around the resort, which is popular with tourists from around the world.

The source added that this was the most important Egyptian-Israeli meeting “for years”.

The meeting, however, was not widely publicised in the Egyptian press, at the request of Cairo authorities.