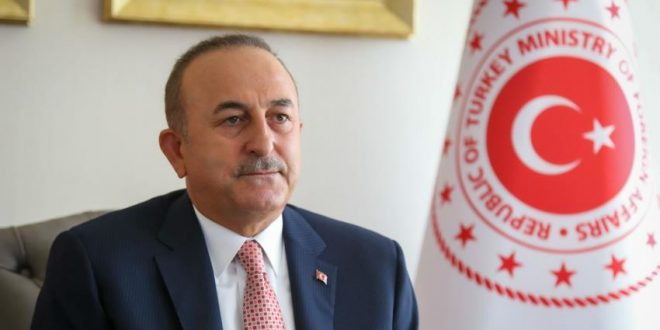 Turkey and Egypt could negotiate a maritime demarcation agreement in the eastern Mediterranean if ties warm between the two countries, Turkish Foreign Minister Mevlut Cavusoglu said on Wednesday.

Speaking at a news conference with his Georgian counterpart in Ankara, Cavusoglu said Egypt’s exploration bids had respected Turkey’s continental shelf and that Ankara viewed this positively.

“As the two countries with the longest coastlines in the eastern Mediterranean, if our ties and the conditions allow it, we can also negotiate a maritime demarcation deal with Egypt and sign it amongst ourselves,” Cavusoglu said.

Relations have been strained between the two countries since 2013 following the ousting of Muslim Brotherhood President Mohamed Morsi.

This comes following Egypt’s announcement in February to bid for oil and natural gas exploration in 24 blocks including some in the Mediterranean last month.

Turkey signed a similar agreement with Libya’s Tripoli-based Government of National Accord (GNA) in 2019.

Turkey’s movements in the Mediterranean has been a cause of conflict with Greece for many years, and the possibility of a demarcation agreement between Turkey and Egypt could prove problematic.

The European Union and the United States have both criticized Turkey’s ongoing maritime research missions in waters where Greece asserts jurisdiction.

But Athens late last year said it expects a Biden administration to be more engaged in the dispute.

“I believe that Greece and Egypt will welcome and have a positive attitude toward the determination of America’s contribution to the events of the Middle East and eastern Mediterranean in our troubled region,” Mitsotakis said.

The dispute between Greece and Turkey triggered a major military buildup over the summer that raised concerns of military confrontation.

Turkey argues that Greek islands along its coastline are blocking its access to undersea gas deposits and that boundaries should be set around the mainland and not include the islands.

In August, Greece and Egypt signed a maritime deal demarcating the two countries’ maritime boundaries and setting out respective exclusive economic zones for the exploitation of resources such as oil and gas drilling.

The agreement, which remains partial, angered Turkey, which has accused Greece of trying to grab an unfair share of resources in the eastern Mediterranean.

The Greece-Egypt deal was widely seen as a response to a disputed agreement reached earlier between Turkey and Libya’s Tripoli-based administration that increased tension in the region.

Greece, Cyprus and Egypt widely criticized the deal between Ankara and Tripoli, saying it infringed on their economic rights.

International Relations and Cooperation
All
2021-03-03
asaeid
Previous Austria: Outrage after authorities target academic as part of ‘terrorism’ crackdown
Next Egypt moves ahead with purchase of Russian arms despite US warnings