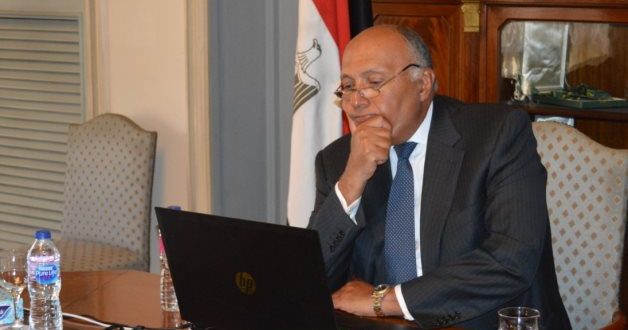 Egypt FM: GERD negotiations have arrived at a crossroads

Egypt’s Minister of Foreign Affairs Sameh Shoukry said on Tuesday that negotiations with Ethiopia and Sudan over the filling and operation of the Grand Ethiopian Renaissance Dam (GERD) have come to a crossroads.

During a joint press conference with the Sudan’s Minister of Foreign Affairs, Maryam Al-Sadiq, Shoukry added: “We support Sudan’s proposal to form an international quartet to oversee negotiations.”

He continued: “Any policies that impose a de facto situation regarding the GERD are considered a transgression … We negotiated with Ethiopia for about a decade and we have arrived at crossroads that will affect everyone’s interests.”

For her part, Shoukry’s counterpart said, “Sudan will not give up its rights or its lands on the border with Ethiopia.”.

Under the supervision of Congolese President Félix Tshisekedi, the African Union, United States, European Union, and United Nations are the four entities proposed by Sudan to mediate negotiations.

Sudan has warned that filling the dam without reaching a tripartite agreement would compromise the safety of the Sudanese Roseires Dam and endanger the lives of millions of people who live in the surrounding area.

The Roseires Dam is located roughly 40 km from the site of the GERD.

The three parties have held several rounds of negotiations over the past years, but have ultimately failed to reach an agreement.

The construction of the dam, which began in 2011, is considered to be one of Egypt’s most serious water issues.

Egypt, which relies considerably on freshwater from the Nile, has voiced fears that the GERD would negatively impact the country’s water supply, and has insisted that measures be put in place to protect downstream countries in case of drought during the dam’s filling process.

Ethiopia, on the other hand, has stressed the importance of the project to bolster its economy, where more than half of the population currently lives without access to electricity.