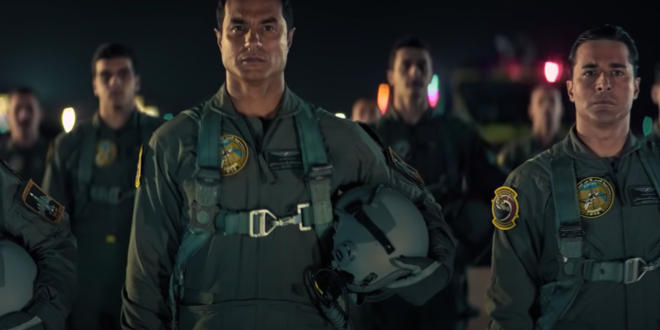 Egypt exhibiting its 2015 airstrikes in Libya with new film

A production company believed to be linked to the Egyptian intelligence has fired the imagination of millions of viewers by unveiling a new film about Egyptian airstrikes in Libya’s northeastern city of Derna in February 2015.

Synergy Films posted the trailer of its new film “Al-Serb” (“Squadron”) on Feb. 14, promising to give viewers an insight into the air raids that followed the slaughter by the Islamic State (IS) of 20 Egyptian nationals.

“The Egyptian president had vowed to avenge the killing of Egyptian citizens and he honored his pledge,” the company’s chairman, Tamer Morsi, wrote on the trailer page.

Egypt staged the airstrikes on Feb. 16, hours after IS posted a video in which it showed the slaughter of 21 people, of whom 20 were Egyptian Christians, in a coastal area in Libya.

The Egyptians butchered in the video were residents of al-Awr village in the central province of Minya.

Like thousands of other Egyptians, these people — most of them construction workers — traveled to Libya to earn a living and escape abject poverty.

Instead of earning a living, however, they met their fate at the hands of the IS terrorists. Their killing was believed to be part of a wider campaign against the Egyptian presence in Libya.

An Egyptian TV director told of the perseverance of the families of the victims during her visit to al-Awr when she visited the village in February 2015 in order to offer her condolences together with a colleague. “Instead of soothing them, they [the relatives of the victims] soothed us,” Haidy Gobran wrote on Twitter following her visit.

“Al-Serb” captures national anger following the killing of the Egyptian nationals in Libya and the national response to this killing.

It starts with a Feb. 15 speech by Egyptian President Abdel Fattah al-Sisi, in which he says his country reserves the right to respond to the killing of the 20 Egyptians whenever and in the way it wants.

It then details preparations for the airstrikes on IS camps in Derna, how the strikes were planned and how they were executed. The film also contains debates on regional terrorism and terrorism financing, according to its scriptwriter Omar Abdel Halim.

Abdel Halim and his colleagues modified the script of the film 12 times before approving a final draft. “We did this to produce a film that suits the greatness of the Egyptian army,” he told Al-Monitor.

Mounir said he and his fellow actors spent time with army commanders planning the airstrikes and pilots executing them. “We listened to great army officers who offered us all the needed support,” Mounir told the local TV channel ON.

Around 4 million people watched the trailer of “Al-Serb” in the first 48 hours after it was posted, according to the production company.

In political terms, the film throws light on an event that caused a shift in Egypt’s strategy toward events in neighboring Libya.

Libya has become a national security concern for Egypt since the downfall of the Moammar Gadhafi regime in 2011, due to the presence of an extended border between the two countries.

Cairo accuses terrorist groups active in Libya of infiltrating its border and carrying out attacks in the country. It also says weapons and explosives smuggled into Egypt from Libya end up in the hands of terrorists affiliated with the local IS branch that is especially active in the Sinai Peninsula.

“The unrest in neighboring Libya has a heavy toll on Egypt’s security,” retired Egyptian army Gen. Gamal Mazloum told Al-Monitor. “With many terrorist camps, Libya has turned into a springboard for attacks against Egypt.”

The February 2015 airstrikes against the IS camps in Derna marked Egypt’s move from covert to overt action in Libya, analysts told Al-Monitor. Cairo used to covertly support the Libyan National Army (LNA) that controls most of eastern, central and southern Libya now. However, the 2015 airstrikes caused this support to be overt. The same airstrikes were not the last to be staged by Egypt in Libya.

In June 2020, Sisi declared most of eastern Libya to be a red line for Egypt, a declaration aimed at repelling potential attacks by the troops of the Tripoli-based Government of National Accord that is backed by Turkey.

“The red line mainly aimed to protect the LNA and send a message to Turkey and terrorist groups active in Libya that Egypt would not tolerate any violation against eastern Libya,” Tarek Fahmy, a professor of political science at Cairo University, told Al-Monitor.

Nevertheless, “Al-Serb” is viewed as yet a new episode in a public relations campaign by the military establishment and the intelligence to ramp up support for the army.

Synergy has been at the heart of this campaign. The company, which was founded in 2003, but acquired by Eagle Capital, which is believed to be a media investment arm of the Egyptian intelligence, in 2017, produced a TV series about Egypt’s fight against the local IS branch in Sinai.

The series, which kept tens of millions of Egyptians and Arabs glued to TV screens during the month of Ramadan last year, especially focused on the life and death of Ahmed al-Mansi, an Egyptian army colonel who became an icon of Egypt’s war on terrorism after his killing in July 2017.

These works are increasingly raising public awareness of the sacrifices of the security establishment, cinema critics say.

“Patriotic films and series are very important at this juncture because they throw light on the role the security establishment plays in protecting this country and its people,” cinema critic Tarek al-Shenawi told Al-Monitor.

In a way, these works raise public morale in a country that has had enough psychological setbacks since the 2011 uprising against longtime President Hosni Mubarak.

However, the new film is also stirring up debate, given the controversial nature of the 2015 airstrikes in Derna and Egyptian involvement in the North African state in general.

Film director Ezz el-Deen Dwedar, a vocal critic of the Egyptian army, believes the euphoria accompanying the film and its trailer is misplaced.

I cannot find any heroism, he wrote, in air raids on disarmed people living under IS control in Derna. “To strike a Libyan city that has no air defense or air force is not heroism at all,” Dwedar wrote on Facebook.

The airstrikes reportedly caused the deaths of dozens of civilians in Derna, leading Amnesty International to accuse Egypt of failing to take precautionary measures to prevent civilians from being caught in the middle of its retaliation for the killing of Egyptian nationals.

Another man, Mohamed Ramadan, wrote that the Egyptian nationals were killed in the northern Libyan city of Sirte.

“However, Egypt chose to strike Derna because it was the farthest Libyan city within the range of Egyptian fighter jets,” Ramadan wrote on Twitter. “It all was a media show.”